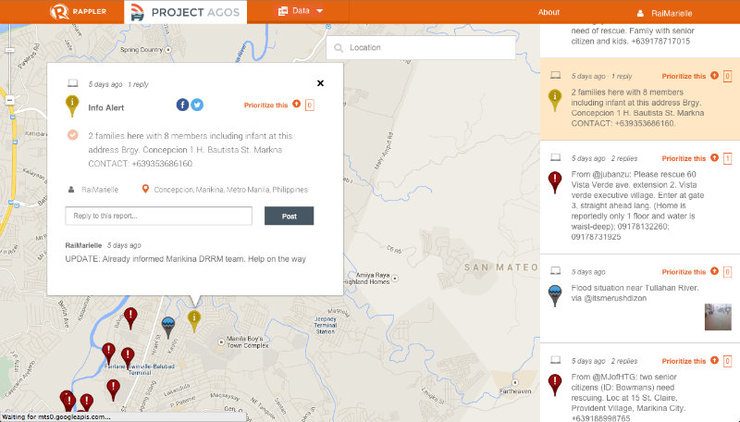 MANILA, Philippines – Citizens and volunteers once more made good use of social media when it helped Project Agos – Rappler’s disaster information system – map people who needed help during Tropical Storm Mario (Fung-Wong) and connect them with responders.

The result: a trapped family, a woman in labor, and a patient with human immunodeficiency virus (HIV), among many other flood victims, were rescued.

The combined effect of the tropical storm and the southwest monsoon caused extensive flooding across Metro Manila on Friday, Septemer 19, prompting netizens to inundate online platforms with posts calling for help.

Here are some of the stories that Rappler compiled of how technology brought together concerned citizens, selfless volunteers, and brave responders .

At around 10:30 am on September 19, Dennis Bacarisas (@denshow10) reported to @MovePH – Rappler’s civic engagement arm that operates Project Agos – that two families were trapped in a house in Barangay Concepcion, Marikina. They were 8 people, including an infant.

The report was plotted on the Project Agos Alert Map and coordinated with Kristin Roxas, Marikina Disaster Risk Reduction and Management (DRRM) chief. By about 12 noon, the families were rescued by city government responders. 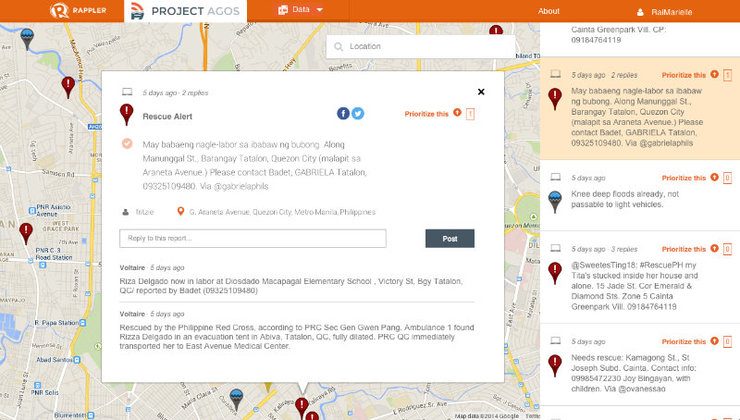 At around 4 pm on September 19, the Project Agos team was able to monitor a Twitter and Facebook report from the women’s group Gabriela (@gabrielaphils) about a woman in labor who got stuck on the roof of her house in Barangay Tatalon in Quezon City.

The Project Agos team contacted a member of the group in the area to verify the report plotted on the Agos Alert Map and relayed it to the Philippine Red Cross (PRC).

The PRC sent an ambulance and rescuers to the area and safely brought the woman to the East Avenue Medical Center, where she gave birth to a healthy, 6.16-pound baby girl at 6:22 pm.

@VoltaireTupaz @MovePH @PNPhotline @PDRRMCBulacan the rescue unit of Patrol 117 got there already. Thank you guys for helping us with this!

On Sunday, September 21, Twitter user @tomasino153 alerted @PNPhotline and @MovePH about a person with HIV suffering from pneumonia and who needed to be immediately transported from a flooded area in Bulacan to San Lazaro Hospital in Manila.

The Project Agos team immediately contacted Patrol 117 of the Philippine National Police, which immediately alerted its rescue team in the area. The PNP deployed help in no time.

Mario dumped rain that prompted the declaration of a state of calamity in Cebu City, Marikina City, Cainta Rizal, and Ilocos Norte.