Netizens to Aquino: So who gave the orders? 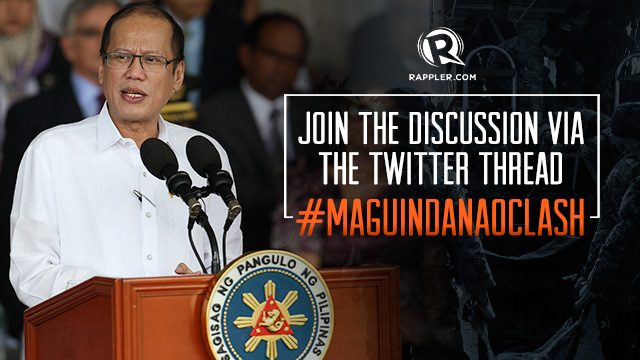 MANILA, Philipines – President Benigno Aquino III’s message on Wednesday, January 28, was expected to clarify what happened in the chain of command that led to the Maguindanao clash. But after his speech, many felt disappointed, saying the President failed to categorically answer the crucial question: Who gave the orders?

@VoltaireTupaz @MovePH Who was ON TOP of that ops? Just the SAF chief? Who did oversight if PNP OIC not in the loop?

@VoltaireTupaz @MovePH Big questions were not answered. PNOY diid not say why PNP OIC or DILG out of the loop. Did not deny their claims

After Aquino’s speech, journalists asked the President several times to give a categorical answer if he gave the go-signal for the operation on January 25, called a “misencounter” by government, that claimed the lives of at least 44 elite cops. (READ: Aquino: I talked to SAF chief before Maguindanao ops)

“‘Sir, can we proceed with the mission?’ I don’t think I was ever asked that question,” the President said. “Isn’t that a rhetorical question?” Aquino told media.

Many netizens felt Aquino evaded the questions and washed his hands of accountability:

@MovePH @rapplerdotcom Not about his speech but his answers to questions from reporters – no categorical answers.

Is it just me or did the president just mouth off a whole lot of words but didn’t really SAY anything? #MaguindanaoClash

“You say it best, when you say nothing at all.” #PNoy #MamasapanoClash #MaguindanaoClash

But Al Qalam Institute for Islamic Identities and Dialogue in Southeast Asia executive director Mussolini Sinsuat Lidasan cautioned the public, stressing that the negotiating parties must collaborate in bringing the perpetrators to justice for the death of government forces.

@rapplerdotcom thus, we need to understand the socio pol landscape in Maguindanao. We should not homogenize the Muslims.

In the Twitter discussion, Mindanao-based journalist Karlos Manlupig explained the differences among rebel factions, but he noted, “They may have organizational differences but at the end of the day they go home to the same villages.”

@VoltaireTupaz @mussol22 so far, many NGOs and peoples orgs are still optimistic. But they are worried over the beating of war drums.

Other netizens also agreed the peace process must continue:

#MaguindanaoClash A lot of people are screaming for an all out war without realizing the repercussions of what they’re asking for.

#MaguindanaoClash Peace process should continue. Quest for justice in this tragedy must also be pushed. Both sides need to move

@VoltaireTupaz @karlosmanlupig @indayevarona focus on the goal which is peace. It is not a concept, but a concrete norm and way of life

@MovePH They have to put into consideration the bigger picture on how it will affect the country’s wellbeing. It goes beyond peace talks.

There are nearly 4 million Muslims in Mindanao, their homeland dating back to the pre-colonial Islamic sultanates.

Journalist Angela Casauay, who is closely following the peace process, stressed during the intense online exchange the importance of seeing the bigger picture which has been clouded by attitudes that divide the nation (READ: What now after the Maguindanao clash?):

Sincere question. What do you guys think? Big part of the Moro Question or the Mindanao problem is our “them-us” attitude. #Maguindanaoclash

Tell us what you feel about Aquino’s speech. (FULL TEXT: Aquino defends SAF operation in Maguindanao) Did he answer the questions sufficiently? What do you think did he fail to address? How do you want the government to proceed on this matter? – Rappler.com