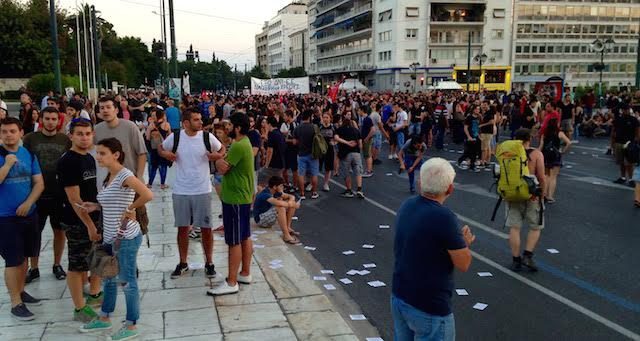 Facebook Twitter Copy URL
Copied
Greece’s creditors are demanding substantial cuts in the government’s pension spending which currently amounts to about 17.5% of the country’s GDP

ATHENS, Greece (UPDATED) – “This is slow death [for Greece],” said 19-year-old Mary Grace Reyes, a Greek-Filipina born here. She was referring to the debt crisis that threatens to plunge Greece deeper into a financial crisis.

On Wednesday afternoon, July 1 Greece time, reports said that in a seeming turnaround, Greek Prime Minister Alexis Tsipras had agreed to most of the conditions imposed by the International Monetary Fund (IMF) and other creditors.

The Financial Times, which obtained a copy of a two-page letter sent Tuesday night by Tsipras to the heads of the IMF, the European Commission, and the European Central Bank, reported that Tsipras still sought some amendments to the terms imposed by creditors. These included delays in defense spending cuts, more gradual pension reforms, and a 30%-discount on Value Added Tax for remote islands. The developments have not gone unnoticed to Reyes. Born to Filipino parents who are “live-in” workers who came here in search of a better fortune, Reyes is undergoing on-the-job training at one of the hotels in Athens.

Her classmate at the Philippine School in Greece and colleague at the same hotel, 18-year-old Derame Joyce Maligaya, said they have been silently feeling the crunch as prices of commodities have been slowly rising since late 2000.

Both hospitality management and tourism students still aspire for a full degree which will require 4 years of studying. At present they are studying to obtain a “Swiss diploma” which they said they can obtain in a shorter span of two years.

Maligaya’s 58-year-old mother first came to Greece and worked as an “all-around” helper in Greek homes before she gave birth to her daughter. Maligaya’s father followed her mother in Greece and tried working as a driver but ended up as an all-around helper himself.

The two Filipina-Greeks who speak both Filipino and Greek said the crisis has been “silently” creeping up, but not yet at levels that are personally disturbing.

Other Greeks, however, are more worried about the debt crisis and its impact on their lives. One shop owner on Plaka, a popular tourist area lined by stores selling Greek gifts and souvenirs, said he has been working for the past 52 years, putting in 14-15 hours a day. He and his son get 10 days of rest at the most during the winter when tourists are more scarce.

“I don’t know enough about what they’re asking us to vote for. They’re not asking if we want Greece out of the European Union (EU),” he said.

Requesting that his name be withheld because he might offend friends who think differently, he said “Greece cannot return to the drachma,” which was valued at 340.75 to the euro. Athens joined the European Union in January 1981 and adopted the euro in 2002 after a transition of one year.

While many Greeks want Greece to stay with the EU, they are against the austerity measures being imposed by the IMF. A taxi driver said he would vote “oxi” or “no” in a referendum on the measures this Sunday, July 1.

He looks up to Tsipras whom he described as a “strong” leader able to stand up to the IMF and Germany’s Angela Merkel, who has taken a hard-line stance against Greece because Germany is one of its principal creditors. Tsipras, who became prime minister only last January, has spoken boldly against the austerity measures – the same position that brought his party, Syriza, to victory.

Tsipras has cited the democratic tradition of Greece as the reason for the referendum that will be held on Sunday. Greeks will be asked to vote yes or no to the austerity measures.

On Thursday, July 2, Tsipras said: “Come Monday, the Greek government will be at the negotiating table after the referendum, with better terms for the Greek people.” (READ: Defiant Greek PM vows to go ahead with referendum) “It’s like standing on a cliff” and choosing between the devil and the deep blue sea, said another taxi driver, trying to explain in English.

For one, Greek pensioners will be greatly affected. Greece’s creditors are demanding substantial cuts in the government’s pension spending which currently amounts to about 17.5% of the country’s GDP.

Greece has an ageing population with over a fifth aged over 65. Yet about 45% of pensioners receive pensions below the poverty line of €665 ($737.51) a month, says the Financial Times.

Tsipras is caught between keeping his promise and making Greece still a part of the EU since an exit could mean withdrawn support from Europe. How Greece will pay its €1.5 billion ($1.7 billion) debt, support its ageing population, and keep political promises earlier made by its Syriza-led government form part of the Greek dilemma.

As the Greeks themselves say, “It’s complicated.” – Rappler.com