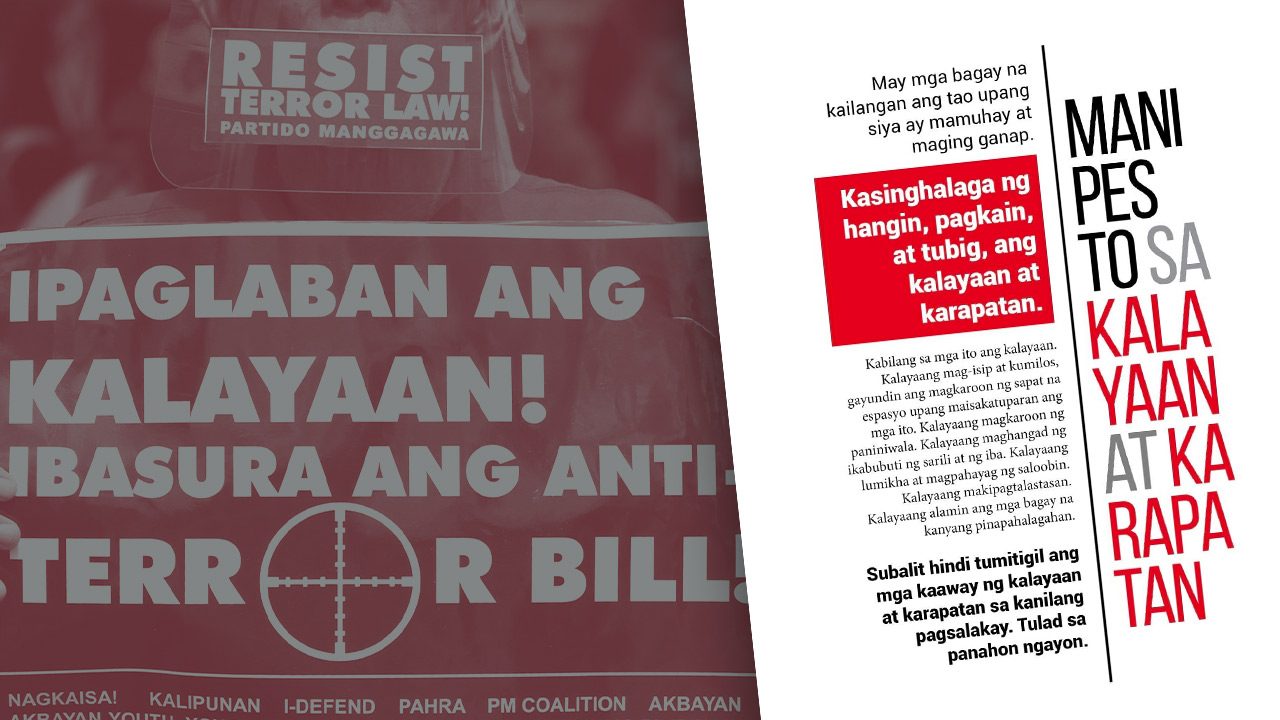 Days ahead of the implementation of the anti-terror law on July 18, a number of organizations from different sectors signed a manifesto vowing to fight for Filipinos’ freedom and rights threatened by the controversial measure.

Media and artists’ groups, as well as other organizations and more than 350 individuals have banded together to sign a “manifesto of freedom and rights.”

The group asserted how the broad definition of terrorism under the law could endanger the lives of activists and critics of the administration rather than specifically targetting terrorists.

(The broad definition of terrorism in this law gives authorities too much leeway to brand as terrorism any activities that they don’t like such as protests, advocacies, or objections to wrong policies and programs of the government.)

Prior to the signing of the law, the country had already witnessed the arrest of a number of protesters.

In late June, police arrested at least 20 people at a Pride march in Mendiola, Manila, even if they observed physical distancing and other health protocols.

In Cebu, at least 8 were arrested at a peaceful anti-terror bill rally near the University of the Philippines Cebu, held after the measure hurdled Congress.

Through the law, people who were arrested without warrants on mere suspicion of being terrorists can be detained for as long as 24 days without being charged.

These threats, the manifesto reiterated, could hamper the freedom of the people to express their opinions and hold the government accountable for its actions.

(What kind of freedom do we have if the only people allowed to exercise it are those who side with the government? What kind of right would this be if it will be considered as a crime? Isn’t it the responsibility of the government to respect and protect the freedom and rights of each citizen? Isn’t it that the suppression of our freedom ang violation of our rights is the very terrorism that they said they want to stop?)

(We vow not to be fearful or cowardly in the face of threats, so that our freedom and rights will remain alive and strong.)

Efforts to challenge the constitutionality of the law are already underway, with at least 5 petitions already filed before the Supreme Court. At least 8 other groups are planning to file more petitions once the law takes effect.

Organizations and individuals interested in signing the manifesto can fill this out. – Rappler.com