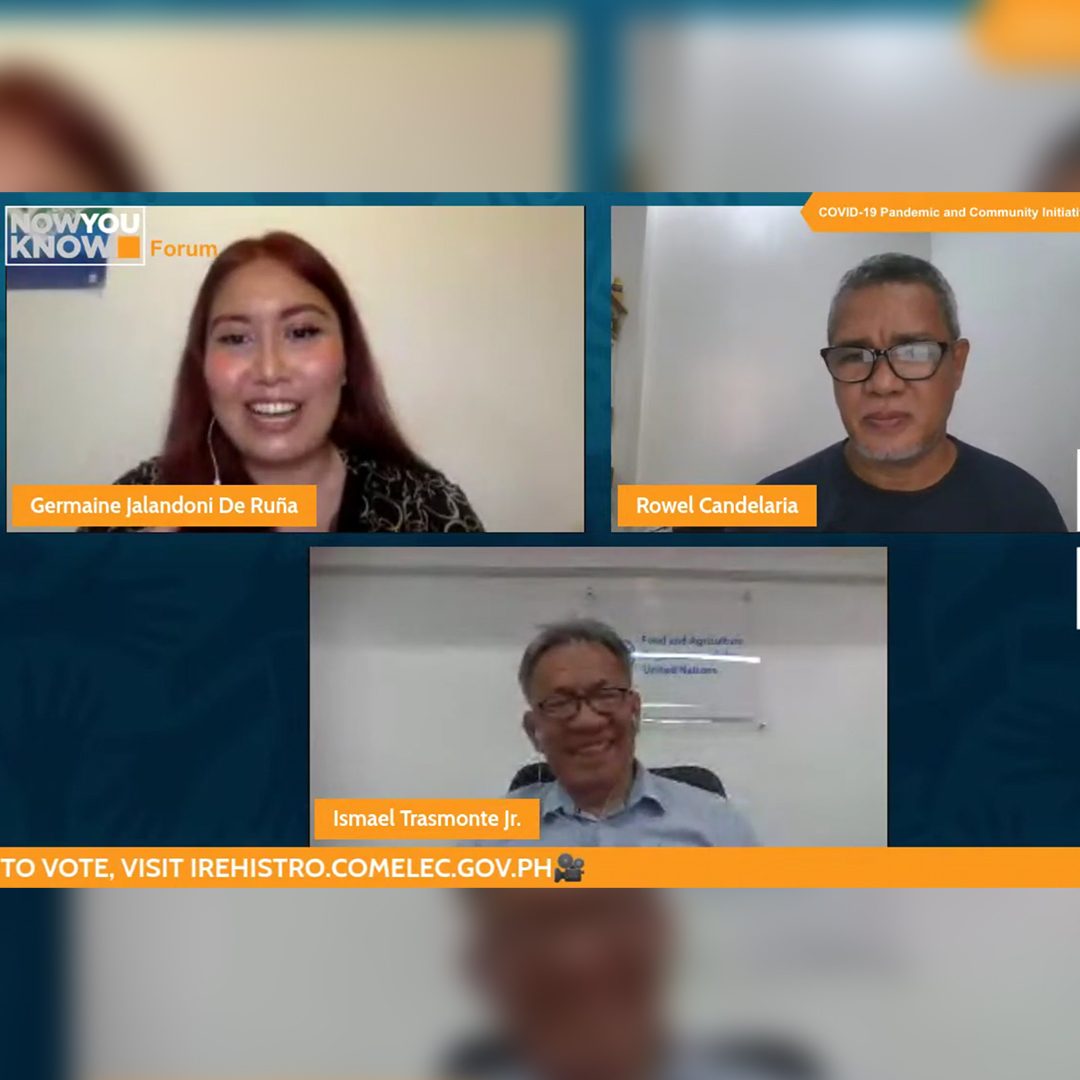 FAR FROM ZERO HUNGER: In a forum by Now You Know on Tuesday, June 29, policy experts, community organizers, and a representative from the farmers’ sector discuss the various programs and initiatives that respond to the current hunger situation in the country.

Photo from Now You Know PH

When government relief and cash aid became hard to come by during the pandemic, community pantries sprouted up all over the Philippines to feed and support hungry Filipinos.

According to organizers, community pantries will last as long as the Filipino bayanihan spirit keeps them alive: “With a crisis like this, may kagyat na pangangailangan. Hindi naman tayo pwedeng mag muni-muni o magplano habang nagugutom ang mga tao. It’s not a matter of sustainability of what you’re doing, but a matter of need,” said lawyer Charlie Yu, an organizer for a pantry in Quezon City.

(With a crisis like this, there’s an urgent need. We can’t just reflect or plan while people are hungry. What you’re doing is not a matter of sustainability but a matter of need.)

Advocates have pointed out, however, that community pantries and food banks are not sustainable solutions to hunger. How can we then better address this problem?

In a forum by Now You Know, held in partnership with MovePH on Tuesday, June 29, policy experts and farmers pointed to a more sustainable way to address hunger in the country: passing pro-farmer legislative actions and projects.

Currently, there are laws in the country that address production and productivity in agriculture: the Comprehensive Agrarian Reform Law, Agriculture and Fisheries Modernization Act, Sagip Saka Act, Magna Carta of Small Farmers, and the Philippine Fisheries Code, among others.

Despite these, Senator Francis “Kiko” Pangilinan pointed out how problems in agriculture remain the same.

According to the Philippine Statistics Authority (PSA), farmers had an average daily income of P331.10 in 2019.

Latest estimates by the PSA also showed farmers and fisherfolk, along with individuals residing in rural areas, had the highest poverty incidences in 2018.

“One clear benchmark that the Philippine agriculture governance has yet to put in place is the income as the basis for success. What’s the point of funding [and] all these investments kung di naman nakakadagdag sa kita ng farmers (if farmers’ income doesn’t increase),” Pangilinan said.

Since it was signed into law by President Rodrigo Duterte in 2019, Candelaria said farmers have suffered from the loss of income due to the influx of imported rice in the country. (READ: What you can do to help Filipino rice farmers)

Ismael Trasmonte Jr. from the Food and Agriculture Organization of the United Nations said that to maximize the impact of the existing laws, several strategies modernizing agriculture must be implemented to boost productivity from smallholder farmers.

As the food security in the country depends greatly on the agricultural sector, Trasmonte called for agricultural support services to be set up, such as research and extension facilities, support infrastructures, the provision of post-harvest facilities, enhanced access to financing, and access to markets.

Trasmonte added efforts in response to climate change must also be implemented as typhoons, flooding, and drought also put agriculture at risk.

Candelaria pointed out another problem in the agriculture sector: farmers are dying out, thus pointing out the need for more of the youth to turn to agriculture. He added how the Magna Carta of Young Farmers must be passed to encourage the youth to farm.

The bill aims to encourage the youth to work in agriculture through eliminating discrimination against farmers, protecting their rights, and promoting their social and economic well-being. It was filed in November 2020 by Senator Ramon Revilla Jr.

Pangilinan added that to make farming “sexy” and to entice the youth, efforts must be made to increase the income of our local farmers.

As the pandemic hit, however, the agriculture sector was not spared in the economic crisis. Candelaria said that mobility restrictions added to the woes of the farmers. This includes limited transportation, multiple checkpoints, and finding markets that would sell their products.

As the stores closed because of lockdown measures last year, the pandemic has forced farmers to throw away unsold vegetables that got spoiled.

While initiatives such as community pantries directly purchasing from farmers and fishermen and local government units (LGUs) buying produce for relief operations do help, Candelaria said that more needs to be done to combat hunger.

Nini Sacro, who runs a community kitchen in Manila, said she hopes local government units (LGUs) would adopt the work done by community organizers. As help mostly comes from individuals and small corporations, she said that assistance from LGUs would be welcome.

(I hope LGUs will also take part in this initiative because we’re not doing this for ourselves. We are serving the people. They have nothing to lose if our efforts tie up.) – Rappler.com

Kristel Ogsimer is a Rappler intern and a third-year student from the University of Santo Tomas taking up Bachelor of Arts in Journalism.