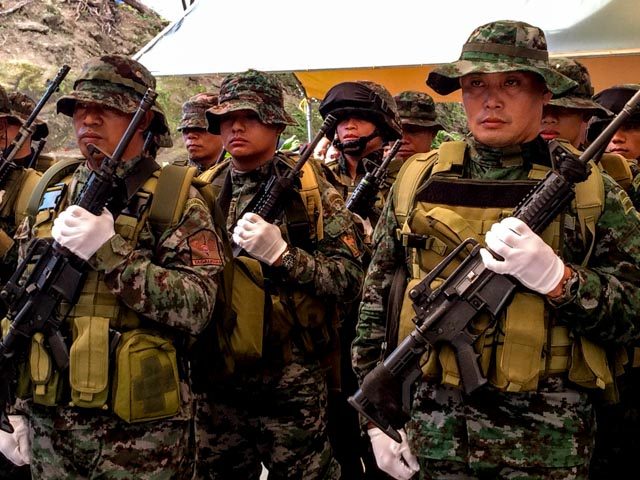 MANILA, Philippines – In the same quadrant where the President addressed a police unit in mourning and where a young inspector berated the government over the lack of “government protection”, troopers from the elite Philippine National Police (PNP) Special Action Force (SAF) remembered their fallen comrades.

“Troopers never die, they simple fade away,” a voice echoed through the SAF headquarters on Saturday, August 8, during the SAF’s Memorial Day, an annual event where they commemorate those among their ranks who died.

On Saturday, the SAF remembered 51 of their fallen troopers, 44 of whom died during “Oplan Exodus,” a January 25 operation that targeted top terrorists. (The SAF 44: Our sons, our heroes)

The failed operation is also the biggest crisis to hit the Aquino administration.

The families of the slain troopers, including the SAF 44, were also at the emotional event, which saw the SAF give a roll call of its current personnel. When the name of a deceased SAF trooper was mentioned, a bell rang – its melody ringing through the SAF headquarters.

“Our troopers fought a good fight and we will never forget them,” said Marquez, who donned the iconic SAF fatigues that day.

“Oplan Exodus” saw some 400 SAF troopers enter Mamasapano, Maguindanao, to target bomb makers long wanted by both the Philippine and US governments. The SAF’s counterparts from the US, personnel from the US military, also graced the event.

Two companies – the 55th and 84th Special Action Company (SAC) – were in the thick of things, in the midst of an area controlled by Muslim rebels. It was during the exit where SAF troopers found themselves surrounded by local fighters. (READ: Napeñas assured SAF troops of artillery, had no ‘abort’ option)

Memories of the gone

The widow one of the 55th SAC, who declined to be named, said the memory of her husband remains fresh in her mind. Her daughter, born during the 2013 Zamboanga siege, still recognizes her late father, although she knows by now that daddy will never come back home. (READ: Zamboanga’s heroes are Maguindanao’s fallen, too)

Her husband was among the troopers deployed during the month-long siege which saw Moro Nationalist Liberation Front (MNLF) rebels attempt to take over Zamboanga.

“She looks for her father and I just tell her, he’s sleeping now. So when I tell her I’m going to sleep, she gets worried,” said the widow, among the family members who attended the SAF Memorial Day.

SAF chief Director Moro Lazo and Marquez handed over cash, from private sector donations, to the families of the slain SAF during the event. But for the widow, no amount of money can make up for dreams lost and bitter-sweet memories.

“I’ve always said: I wish I could trade anything for him to be there,” said the widow, who said she tears up whenever she sees fathers bonding with their children.

Although “Oplan Exodus” happened more than 6 months ago, the SAF 44 have been the subject of headlines recently after President Benigno Aquino III failed to mention them during his last State of the Nation Address (SONA). In contrast, opposition leader Vice President Jejomar Binay made repeated mentions of the SAF 44 during his own “true” SONA.

The SAF 44 widow said she’d rather not let her husband’s name be dragged into the tumultuous world of Philippine politics, saying all she really wants is for those responsible for her husband’s death to pay the price. When Napeñas, the police general who commanded SAF during the operation, approached her during the program, the widow started tearing up. Her husband was the designated driver of his company. “He said he remembered him, and saw him all the time when we has still alive,” said the widow.

Marquez, who took over the 160,000-strong PNP late July, said he was saddened by the so-called “politicization” of the SAF 44.

(If you ask those who died, that’s not the point. They sacrificed their lives for the country. It saddens me to know that some people are using them for political gains. But since day one, the SAF has been used for political mileage.)

The normally secretive and low-profile SAF is again beginning to open its doors to the public, through invites to the media. It will not be easy for a unit still recovering from its biggest crisis.

As the oft-repeated line goes, SAF troopers don’t die – they simply fade away. And their memories linger. – Rappler.com