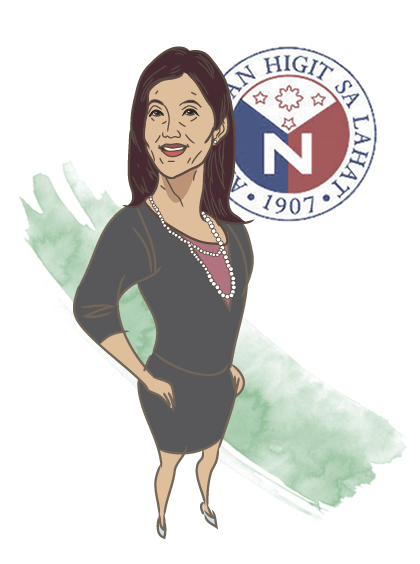 MANILA, Philippines – The former senatorial candidate of ex-President Gloria Macapagal-Arroyo candidate turned out to be a critic of some of her decisions, as well as that of the Supreme Court. It is unclear, though, where the lawyer and her party stand on Chief Justice Renato Corona’s impeachment and the allegations against him.

In 2004, Cayetano ran under the pro-Arroyo coalition called Koalisyon ng Katapatan at Karanasan para sa Kinabukasan (K-4). At 38, she became the youngest woman elected in the history of the Philippine Senate.

In 2010, Sen. Pia Cayetano ran for reelection under the Nacionalista Party of Sen. Manny Villar.  She took her oath of office in June 2010 before Corona.

Education: BA Economics, UP; Bachelor of Laws, UP

Professional background: Founder of Maxi Group of Companies (retailer, distributor of educational toys, infant apparel and accessories); served as general counsel of Philweb Corp and worked in the legal and corporate affairs of Belle Corp and affiliates. She was also associate lawyer, Castillo, Laman, Tan and Pantaleon Law Offices (1992-1995)

Eligible for reelection? No. Pia Cayetano is serving her second consecutive term at the Senate. Her first term spanned 2004 to 2010.

Position aired and published on Corona and on the issues related to the Articles of Impeachment:

In February 2010, Cayetano was among 12 senators who signed a resolution “expressing the sense of the Senate” that then President Gloria Macapagal-Arroyo should not make midnight appointments in the judiciary, like choosing the next chief justice. (Link to resolution: http://www.senate.gov.ph/lisdata/1356611981!.pdf)

Cayetano sided with 37 professors of UP Law who criticized SC Associate Justice Mariano del Castillo for plagiarism. The SC ordered the professors to explain why they should not be sanctioned for issuing a statement on the issue when a probe was underway.

In a statement, Cayetano said that plagiarism is a form of dishonesty that is taboo and frowned upon.

She said, “As the last bastion of justice, the SC is expected to set the highest standards of integrity, credibility and professionalism. Unfortunately, the high court failed in this respect when it allowed a clear case of plagiarism within its ranks to go unpunished.” – Rappler.com