Facebook Twitter Copy URL
Copied
During the Marcos regime, San Juanico Bridge did not just refer to the longest bridge in the country. It had a far more sinister meaning.

(WARNING: The following illustrations may be graphic to some readers. Kindly view at your own discretion.) Her weak health did not stop her from being an active student leader. She was editor-in-chief of HASIK, PLM’s student publication that openly criticized the Marcos administration. Lilli was too sickly to rally on the streets and channeled her strength through her pen, writing thoughtful essays against the dictator’s regime.

At 23, Lilli made it to history books and publications, but not because of her academic excellence nor her writing talent. She was the first female and student activist to die in detention during martial rule.

Drunken soldiers from the Constabulary Anti-Narcotics Unit (CANU) beat up Lilli and took her to Camp Crame. She was eventually found dead in the detention center. CANU reported she committed suicide by drinking muriatic acid, but her body showed signs of torture: her lips bore cigarette burns, her arms had injection marks, and her body was full of bruises. According to her sister, her internal organs were removed to cover signs of torture and possible sexual abuse.

Lilli’s tragedy is just one of the many stories of torture during the Marcos regime.

Amnesty International (AI) has estimated that during martial law, 70,000 people were imprisoned, 34,000 were tortured, and 3,240 were killed. The AI mission, which visited the Philippines from November to December 1975, found that 71 of the 107 prisoners interviewed alleged that they had been tortured.

Historian Michael Charleston Chua published a study entitled, “TORTYUR: Human Rights Violations During The Marcos Regime,” that detailed the different kinds of torture used by authorities during this dark chapter in Philippine history, as recounted by victims and published in different reports.

According to Chua, here’s what physical torture looked like during martial law: Electric shock – Electric wires are attached to the victim’s fingers, arms, head and in some cases, genitalia. San Juanico Bridge – The victim lies between two beds and if his/her body falls, he/she will be beaten. Truth serum – An injection administered in hospitals and used for interrogation, making a victim “talk drunkenly.” Russian roulette – Loading a bullet into one chamber of a revolver, spinning the cylinder, and then forcing the victim to pull the trigger while pointing the gun at his/her own head. Beating – Victim is beaten by a group of soldiers. Pistol-whipping – The victim is beaten with a rifle butt. 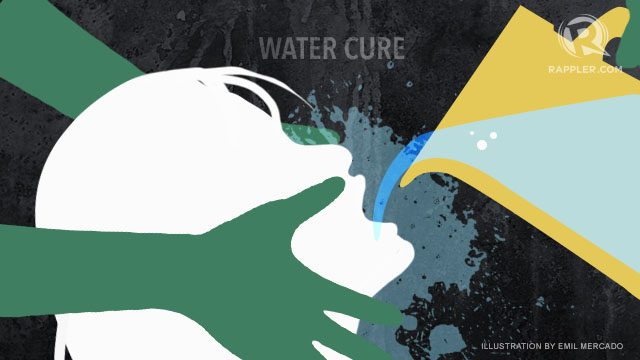 Water cure – Water is forced through the victim’s mouth and then forced out by beating. Cigar and flat iron burns – Victims of torture are inflicted with burns using cigarettes, and even a flat iron. Pepper torture – A “concentrated pepper substance” is put on the victim’s lips or rubbed on his/her genitalia. Animal treatment – The victim is shackled, caged, treated, and fed like an animal.

Other forms of torture Torture during martial law also came in non-physical forms. Chua noted that the regime also inflicted psychological and emotional torture to “shake one’s principle.” This is done through solitary confinement and isolation. Some reported mental torture by threats of imminent death, rape, and harm to their families.

Stories of sexual abuse were also prevalent inside detention centers. Women were stripped naked, made to sit on ice blocks, stand in cold rooms, and raped and sexually assaulted using objects such as eggplants smeared with chili peppers. Even during martial rule, no amount of censorship nor state control could stop the horror stories from spreading then, as they got more and more atrocious every day.

Survivors and families left behind by victims of the regime are still haunted by the trauma they and their loved ones suffered at the hands of those who had sworn to protect them. Decades after the Marcos regime, these stories continue to be told, serving as stark reminders of the country’s darkest years.