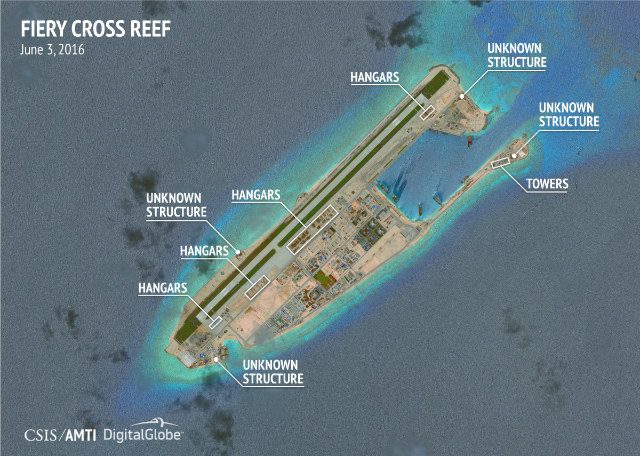 MANILA, Philippines – The Chinese hangars being constructed in the West Philippine Sea (South China Sea) prove that China is planning to “militarize” its artificial islands there, an expert told Rappler.

“This is just the smoking gun that proves what we already knew – that China always intended to ‘militarize’ these artificial islands,” Poling said in an email to Rappler on Wednesday, August 10.

After all, he said, “China didn’t build 3,000-meter reinforced runways tailored to military aircraft if it didn’t plan to deploy them.”

Poling made these remarks after AMTI, part of the Washington-based Center for Strategic and International Studies (CSIS), released photos that show China building hangars on its artificial islands.

Many of these photos had been taken after an arbitral tribunal in The Hague, Netherlands, struck down China’s expansive claim over the West Philippine Sea on July 12.

Poling explained why he thinks China is constructing these hangars.

“China wants to establish effective control over the sea and airspace in the South China Sea. Being able to project air power throughout the nine-dash line is a key part of that,” he said.

“Combined with the increase in Chinese naval, coast guard, and fishing militia presence that is being allowed by these bases, it is going to make it very difficult for Southeast Asian claimants like the Philippines to maintain access to contested waters and airspace,” he added.

Poling also said China’s facilities on these artificial islands “make it clear that China wants de facto control, even if it can’t have legal control, over the South China Sea.”

“It is key that Southeast Asian states and their partners, including the United States, continue to assert their rights to access these waters and airspace despite the increase in Chinese military and law enforcement presence we will soon see,” he said.

M. Taylor Fravel, political science professor at the Massachusetts Institute of Technology, said the construction of the hangars “probably began at least 6 months ago, and photos from May and June show completed hangars on Fiery Cross Reef.”

Fravel, an international relations expert who studies China and East Asia, told Rappler that the construction of the hangars “is part of the overall development plan for the islands.”

“The real question concerns whether China decides to use these facilities for military purposes, as forward bases for Chinese airpower that could directly threaten the other states that occupy land features in the South China Sea,” Fravel said. – Rappler.com