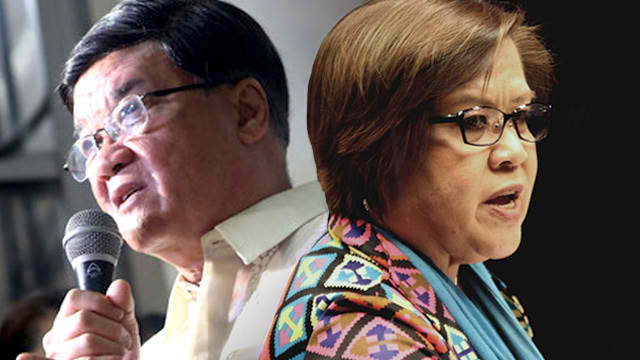 The case was filed with the Muntinlupa Regional Trial Court, where the New Bilibid Prison maximum security compound is located, according to Justice Undersecretary Erickson Balmes.

It comes 5 months after a sensational House inquiry initiated by administration allies, where Bilibid convicts were allowed to testify on De Lima’s alleged transactions with them. (READ: The public trial of Leila de Lima)

The case is “plain and simple political persecution,” De Lima said in a statement.

According to the charge sheet issued by a DOJ panel, De Lima violated Section 5 of the Dangerous Drugs Act, which penalizes the “sale, trading, administration, dispensation, delivery, distribution and transportation of illegal drugs.”

Justice Secretary Vitaliano Aguirre II earlier said they will file the charges before a regular court instead of the Office of the Ombudsman because the crime – involvement in illegal drugs – is not related to her office.

A staunch critic of President Rodrigo Duterte, De Lima said on February 13 that she was expecting an arrest warrant “soon” and that she is prepared for the worst.

The senator has accused the administration of concocting charges against her following her involvement in the investigation of the so-called Davao Death Squad when Duterte was mayor. De Lima led the probe when she was chairperson of the Commission on Human Rights.

It is still unclear whether De Lima will have the right to bail, but under criminal procedures, “no person charged with an offense punishable by life imprisonment shall be admitted to bail regardless of the stage of the criminal prosecution.”

In an interview with reporters at the Palace press working area on Friday afternoon, Chief Legal Counsel Salvador Panelo said that if De Lima would go to jail, she would “finally get a taste” of what former president Gloria Macapagal-Arroyo had gone through.

Asked for the government’s “end goal” in filing charges against De Lima, Panelo said: “‘Pag napatunayan na involved siya sa drugs, e di makukulong siya. Matitikman niya na ang pinatikim niya kay Arroyo (If it’s proven that she’s involved in drugs, then she would go to jail. She would finally get a taste of what she put Arroyo through).”

Panelo is a friend of Arroyo. The former president spent nearly 4 years under hospital arrest before her acquittal of plunder charges in relation to the alleged misuse of Philippine Charity Sweepstakes Office (PCSO) intelligence funds. De Lima, who served as Commission on Human Rights chair during the Arroyo administration, was justice secretary during the previous administration.

Apart from a consolidated drug complaint filed by the Volunteers against Crime and Corruption, the National Bureau of Investigation, former NBI deputy directors Reynaldo Esmeralda and Ruel Lasala, and inmate Jaybee Sebastian, De Lima is also facing also facing charges of indirect bribery and violation of the anti-graft law.

De Lima earlier asked the Court of Appeals to stop the DOJ’s investigation, saying the jurisdiction falls with the Office of the Ombudsman since she is an elected official. She had also asked for a court order to stop the probe but failed to get one. (READ: De Lima fails to get TRO on drug probe)

On the eve of the filing of the criminal charges, the Senate leadership said they cannot stop the arrest but will ensure the warrant would not be served inside the session hall.

De Lima’s allies in the Senate have slammed the DOJ, saying a release of an arrest warrant “without credible evidence” violates the law. – Rappler.com