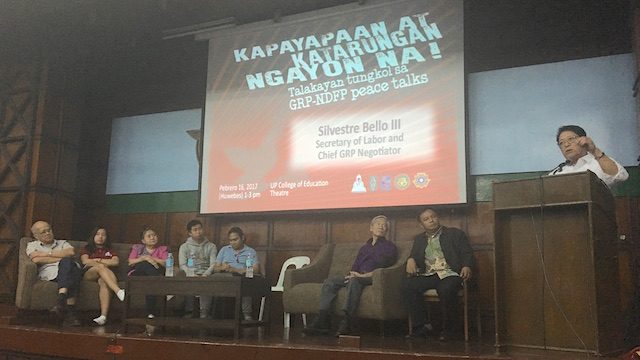 Facebook Twitter Copy URL
Copied
In a forum in UP Diliman, Secretary Silvestre Bello III stresses the importance of keeping the talks going

“That is an indication the process is still alive,” Secretary Silvestre Bello III told reporters on the sidelines of a forum on the peace process held at the University of the Philippines in Diliman on Thursday, February 16. (READ: Leftist Cabinet members to convince Duterte to revive peace talks)

Bello however admitted that he has not spoken to Duterte about the talks nor updated him on the accomplishments of the 3rd round of talks in Rome in January.

In the forum in UP Diliman, Bello stressed the importance of keeping the talks going and asked the student to support the talks aimed at ending Asia’s longest-running communist insurgency.

“You are the younger set of our country. Kami malapit na kami mag-retire (We are retiring soon). Whatever happens to the talks, kailangan itulak ninyo (You have to push for it). Kayo dapat mag-advocate to bring the peace process to its logical conclusion and that is lasting peace in our country,” Bello said.

Duterte scrapped the talks after the communist armed wing New People’s Army (NPA) terminated its unilateral ceasefire and ended a 5-month-old peace with the military.

Randy Malayao, a negotiator of the National Democratic Front (NDF) representing the communist rebels in talks with government, said ceasefire abuses by the military forced the rebels to fight back and terminate the ceasefire.

The NDF had pushed for a “talk while fighting” scenario where the talks continue despite the resumption of violence on the ground. citing a similar arrangement during the Ramos administration.

But Bello argued the NPA move was not justified because the talks were going well.

Secretary Bello maintains that NPA’s termination of its unilateral ceasefire was not a justified decision @rapplerdotcom pic.twitter.com/9vzIiH7Fow

Duterte later cancelled immunities given to the NDF consultants under the Joint Agreement on Safety and Immunity Guarantees (JASIG).

Duterte said he will only revive the talks if there is a compelling reason for him to do so. But Bello said he won’t speculate on what could change Duterte’s mind.

At the moment, Bello said the talks are effectively terminated despite the refusal by the NDF to acknowledge it. But JASIG remains in effect, said Bello, acknowledging that it will take effect 30 days after its termination.

The best scenario for the peace process, he said, is for the talks to be revived before the JASIG expires. Bello also expects that the motions filed by the Office of Solictor General to cancel the bail of NDF consultants will also take time.