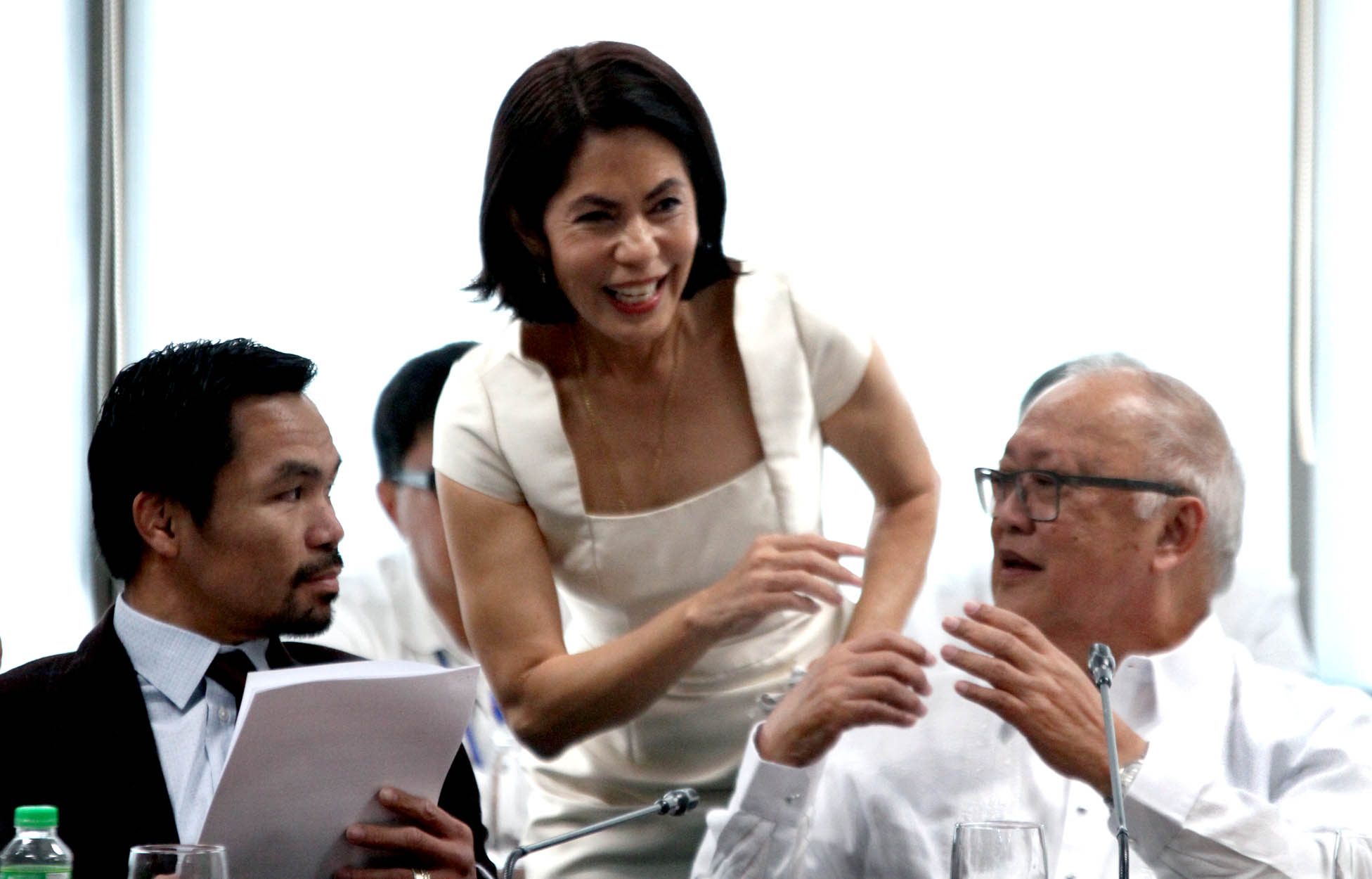 MANILA, Philippines – What’s the definition of a watershed?

Members of the powerful Commission on Appointments (CA) asked Environment Secretary Gina Lopez this question during her confirmation hearing on Wednesday, March 8. (READ: Lopez to CA member: Tell your brother he killed a mountain)

CA member and Senator Panfilo Lacson first asked the environment secretary about the process of the Department of Environment and Natural Resources (DENR) in approving or disapproving mineral production sharing agreements (MPSAs).

Lopez in February ordered the cancellation of 75 MPSAs in watersheds all over the country.

Lacson asked Lopez about the requirements needed for mining companies to secure an MPSA. He said his question is a “question of competence.”

Another CA member from the House contingent, Occidental Mindoro Representative Josephine Ramirez Sato, also asked Lopez whether the MPSA is a permit or a contract.

“It’s a mining contract between government and the mining company. I’m really not a technical person at all, but that’s why I have people who I trust,” Lopez said, referring to her consultants.

She admitted that she’d “fail” if the CA questions her on her “technical ability on mining.”

Sato then asked: “If it’s a contract, what is the basis for canceling or terminating this contract or agreement?”

Lopez cited the Philippine Mining Act of 1995, saying it’s the mandate of the DENR to “maneuver the resources of the country such that it doesn’t impede in the quality of life of present and future generations.”

Section 19 of Republic Act 7942 or the Philippine Mining Act of 1995 lists proclaimed watersheds among areas closed to mining applications.

“A watershed is a watershed because it functions as a watershed, and it supports life, and to do any kind of extractive industry near rivers and streams will affect human life there,” she added. (READ: Lopez’s game plan at confirmation hearing: ‘Tell the truth’)

Before proceeding with the hearing, CA members reprimanded the crowd for laughing at Lopez’s answers, with Manila 6th District Representative Rosenda Ann Ocampo saying the laughter “I think is aimed to belittle or distract the nominee.”

Sato continued: “But there is a formal proceeding before an MPSA is canceled to prove that all these violations were committed. Is that correct?”

The environment secretary said yes, noting that she followed the law, but she clarified that the MPSAs are not yet canceled, and that they only issued show-cause orders to mining companies.

‘Aren’t we violating the law?’

Sato then asked Lopez what the law says regarding watersheds that are “no-go” zones for mining.

“The law specifically says that there should be no mining in critical watersheds. However, as DENR secretary, I have the prerogative to make decisions on whether there should be mining on watersheds at all, whether they are proclaimed or not. It is totally in my mandate,” Lopez answered.

“So even if the law specifically states that you cannot mine only in proclaimed and critical watersheds, the secretary of environment and natural resources can motu proprio (on his or her own impulse) decide and cancel mining operations in all watersheds? Aren’t we violating the law here?” Sato asked.

Lopez again cited the Mining Act in reiterating that it is in her mandate to cancel the MPSAs in all watersheds.

“As I’ve said, I admire your passion to protect the environment, and I share that passion. My concern here is the law,” Sato said.

“I mean, being lawmakers here, we would want to know the definition of a critical and proclaimed watershed because if there is something lacking in the law, then we should file a bill or pass a law to declare… that no mining activties can be conducted in all watersheds. Because I believe that we should follow what is stated in the law.”

Senator Franklin Drilon joined the discussion: “Obviously there’s a standard: You cannot mine in critical and proclaimed watersheds. That is the standard imposed by law. Now, is there a definition of what is critical? Or is that left to your discretion?”

Lopez said the law does not say that only critical areas are “no-go” zones, admitting that this is a “gray area.” She added that the law does not stop the environment secretary from making a policy that includes all watersheds.

But Drilon urged her to “make a fine distinction and definition” of her power to cancel MPSAs.

“That’s where maybe you cannot get an agreement from many legislators because the law says critical, and therefore that is the standard imposed on the secretary and on the DENR, that the watershed must be critical in order that mining would be prohibited. We cannot just say that ‘we have the mandate to ban everything.'”

Lacson then asked Lopez on who makes the proclamation that a watershed is critical.

“There was an executive order proclaiming 143 critical watersheds, and these areas are clearly no-go zones,” she answered.

The discussion was cut short after Drilon moved to suspend the hearing that lasted for two hours.

Only two out of 23 who oppose Lopez’s appointment were able to present their case before the CA before the hearing was suspended.

Editor’s note: In an earlier version of this story, the quote “I think is aimed to belittle or distract the nominee” was attributed to Occidental Mindoro Representative Josephine Ramirez Sato. It was Manila 6th District Representative Rosenda Ann Ocampo who said that. We apologize for the error.