May 17, 2017 1:56 PM PHT
Natashya Gutierrez
Facebook Twitter Copy URL
Copied
'We cannot allow women who pretend to be for women and then enable misogynists in positions of power. Hello, Pia Cayetano, and hello, other women’s groups that are in alliance with this President,' says Meggan Evangelista of Babaylanes Incorporated 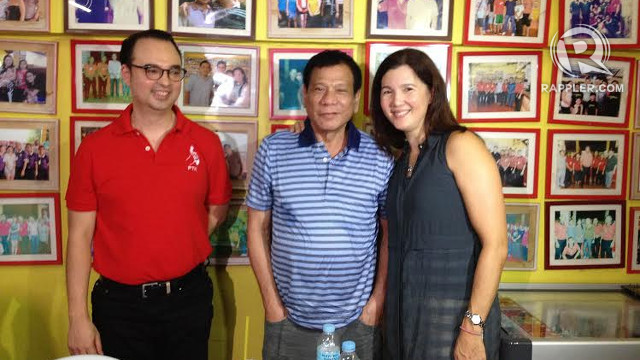 In a forum on women empowerment, feminists from various industries and backgrounds who came together to share their thoughts on the state of women in the Philippines all agreed: Men in power who make misogynistic statements should not be tolerated.

Asked what she thought was the biggest obstacle to women empowerment in the Philippines today, Sister Mary John Mananzan, a staunch feminist and the Executive Director of the Institute of Women’s Studies of St Scholastica’s College, mentioned Duterte. (READ: ‘I am a nun but I am pro-RH law’ – Sr Mary John Mananzan)

“I have one more obstacle. And that is the President. The machismo of Duterte,” she said on Tuesday, May 16, eliciting loud applause from the audience.

“He has a very deep-seated machismo and that is giving a bad example, and it’s a very contagious thing. Look at all his appointees. The Department of Justice, the persons there in Congress. They flaunt all their machismo because they have an example and it is so difficult to teach our children now values and respect for women because what do they see in TV?” Mananzan added.

In a separate panel on womanhood in Philippine society, Meggan Evangelista, Executive Director of Babaylanes Incorporated, also singled out the President.

“That’s one of the greatest challenges we face today. We cannot let Rodrigo Duterte get away with his misogyny as feminists that we are here today,” Evangelista added. Again, her response triggered loud cheers from the audience.

Evangelista also noted that Duterte was not the only problem. She cited politicians like fomer senator Pia Cayetano, who enable the President. Cayetano is the sister of Senator Alan Peter Cayetano, Duterte’s staunch defender and incoming foreign secretary.

“We also cannot allow women who pretend to be for women, and then enable misogynists in positions of power. Hello, Pia Cayetano, and hello, other women’s groups that are in alliance with this President,” Evangelista said.

“If you are a woman and you enable a misogynist like Rodrigo Duterte, then girl, you cannot sit with us. And the horde of trolls supporting, and enabling, and encouraring women who support misogynists in power, they feed each other. I think this right now, at this current, political conjuncture, this is the greatest challenge that women face today,” she added.

Prior to the Duterte administration, Cayetano, who is now Representative of the 2nd District of Taguig City-Pateros, was seen as a women’s rights champion as she sponsored the reproductive health bill in the Senate. Her statements in defense of Duterte’s sexist remarks had changed that image. (READ: [DASH OF SAS: To the girl who was told by Pia Cayetano, ‘Boys will be boys’)

Mananzan did not name Cayetano specifically, but emphasized the need for women leaders to be conscious and aware of feminism.

Mananzan also expressed her disappointment in celebrity dancer and blogger Mocha Uson, one of the prominent supporters of Duterte, recently appointed as an assistant secretary of the Presidential Communications Operations Office (PCOO).

“It makes me so sad that a woman is such a rabid supporter of Duterte and that is Mocha Uson. I’m really so saddened by that. Because the way that is for me is unacceptable,” she said.

Duterte has been criticized for catcalling a female reporter, boasting about illicit affairs, making derogatory comments about women, making a controversial joke about rape, and commenting on the appearance of Vice President Leni Robredo, among others.  Allies like Pia Cayetano have defended the President, saying the foul language he uses is simply the way he speaks, and that Duterte has done a lot for women’s rights in Davao City when he was mayor.

Gertrudes Ranjo-Libang, Vice Chairperson of Gabriela Alliance of Women’s Organizations in the Philippines, said one upside of the misogynistic comments made by male leaders is increased awareness on the still-present problem of sexism.

“In a way, it is good they are making these statements because we know that machismo is still there, in their minds. It also means we should be more vigilant,” she said.

“The last one was [Senator Tito] Sotto, but he said sorry afterwards. He may not be sorry but at least it’s something to start with,” Ranjo-Libang said, referring to the senator’s apology over his joke about single mothers at the confirmation hearing of Social Welfare Secretary Judy Taguiwalo.

“Vigilance is something we should do. It’s not only the women organization that should be vigilant but it should be everyone,” she added.

Ranjo-Libang did not mention Duterte, but said that it is important to hold men in power accountable.

“In government, there’s a lot of [gender talk] but sometimes they just say ‘yes’ but what they do is different from what they say. And we’re seeing it now,” she said.

Emmeline Verzosa, Executive Director of the Philippine Commission on Women (PCW), believed there was progress in feminism in the government, at least when it comes to promoting gender sensitive activities. She said that currently, government agencies are mandated to allocate 5% of their total budget to gender and development programs.

“In government, I’d like to believe there’s growing feminism even when they don’t call it such. But it’s a growing gender awareness and responsiveness and I’d like to also believe that the programs they do in government are becoming more attuned to the needs of women,” Verzosa said.

She said that after Sotto’s discriminatory remarks against single mothers, the PCW quickly issued a statement decrying his comments, saying “it’s not a joking matter.” She said Sotto then met with a solo parent group and vowed to help push a bill to protect them.

Verzosa said this was a good example of “taking an obstacle as an opportunity, as well as to keep on fighting.”

Are you a feminist?

Verzosa said that today, many are uncomfortable to call themselves feminists,  “because they still think it’s that bra-burning notion of the ’60s.” But she said this is not the correct definition.

Mananzan said the definition of feminism is actually basic, and consists of just two questions: “First, are you aware there is discrimination, oppression and exploitation of women as women and it cuts across class, creed, race and nationality? Do you see that? If not, you are deaf, and blind and dumb. If you do, then are you willing to change the situation in any way you can”

“If your answer is yes to both of them, then you are a feminist,” she said.

She said that since she has started fighting for women’s rights in the 1970s, she has seen a lot of progress in the feminism movement in the country, although she emphasized it was important to reach the women at the grassroots level who have yet to be exposed to the idea of gender equality.

But she said it was equally important to help change the mindset of men.

“I think when men are really enlightened about their own conditioning, then they will become less [likely to be] perpetrators. They will become the partners of women in enhancing the good of the men and the women,” she said.

“If we do not educate the men, they will not be conscious why they rape….The men we talked to, they felt liberated by the fact that they know they are conditioned.”

Ranjo-Libang said there is a need to change these structures in society which condition men and promote gender inequality.

“It’s very much ingrained not only in Philippine culture but also in Philippine economics and politics,” she said, pointing out the padrino system in politics or the term padre de familia both imply that men have the power.

Mina Roces, professor at the University of New South Wales in Australia, said there is also a need to push for a women’s vote.

“We still need to get a women’s vote because people don’t vote for politicians just because they’re women. We need to sustain a women’s party and we need to get politicians, male or female with a feminist consciousness,” she said. – Rappler.com