May 27, 2017 3:14 PM PHT
Bea Cupin
Facebook Twitter Copy URL
Copied
Despite the back-and-forth between the CPP-NDF and defense officials, peace talks between the Philippine government and NDF continue in the Netherlands 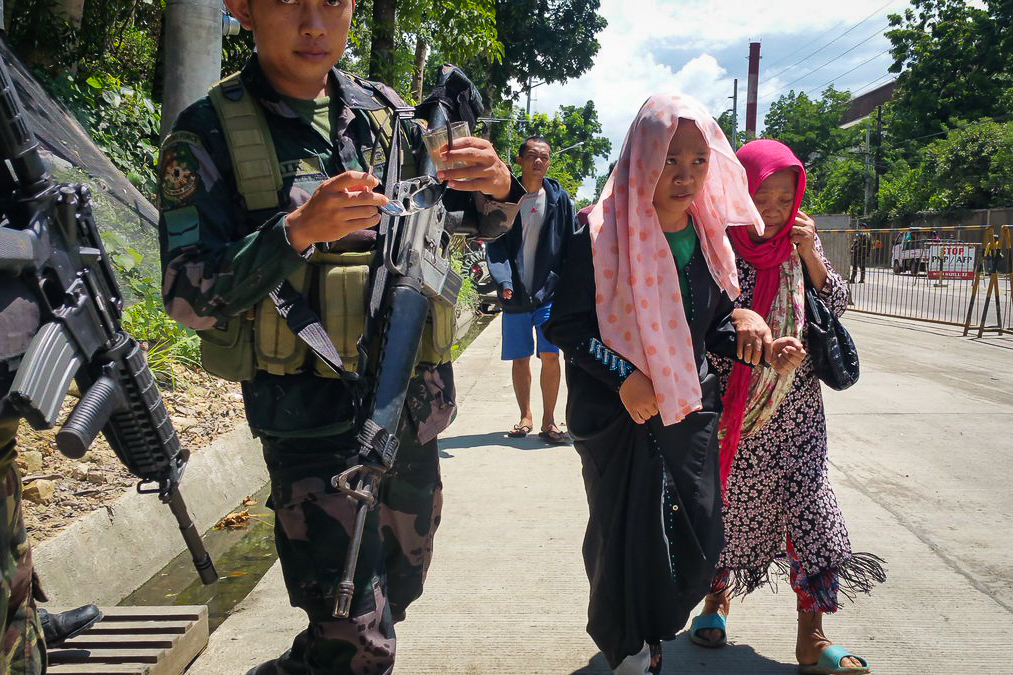 DAVAO CITY, Philippines – Martial law administrator and Defense Secretary Delfin Lorenzana on Saturday, May 27, said the Armed Forces of the Philippines (AFP) “will not specifically target” the New People’s Army (NPA) as martial law is implemented in Mindanao.

Lorenzana issued the media statement following releases from the National Democratic Front (NDF) and NDF chief political consultant and Communist Party of the Philippines (CPP) founder Jose Maria Sison hitting the defense chief for supposedly saying the NPA will also be a target of martial law.

In separate statements released on May 26, the NDF panel and Sison said the Philippine government had already said the NPA is not a target of martial law, “contrary” to Lorenzana’s statement.

“The GRP side has clarified that the NPA is not a target. In fact President Duterte himself told Fidel Agcaoili in their recent meeting that the GRP and NDFP should unite against terrorist groups like the Maute group and Abu Sayyaf,” said Sison in a statement.

Lorenzana, who reports directly to the President as defense chief and as martial law administrator, said they will follow President Rodrigo Duterte’s directives on martial law which was imposed “to address radical Islamic terrorism and narco-terrorism in Mindanao.”

Amid ongoing peace efforts between the Philippine government and the communists, Lorenzana, however, emphasized that NPA members who break the law will not be spared.

“Let me emphasize, however, that members of the CPP-NPA who will engage in criminal and illegal acts such as kidnapping, extortion, murder, and the destruction of property will be dealt with or without martial law,” he said.

Following the announcement of martial law, the CPP directed the NPA to “accelerate the recruitment of new Red fighters” and “plan and carry out more tactical offensives across Mindanao and the entire archipelago.”

Lorenzana said in his statement: “Gusto ko lang liwanagin ang mensahe ko sa CPP-NPA. Huwag na kayong makigulo pa sa nangyayari ngayon sa Mindanao. Do not force the government’s hand. Immediately stop all illegal activities and abide by the true spirit of the peace process. This is the only way we can move forward.”

(I want to make my message to the CPP NPA clear: Do not add to the chaos in Mindanao.)

In a press conference on May 26, AFP spokesman Brigadier General Restituto Padilla gave the same warning.

“If the NPA continues to violate our laws and with impunity attack our forces, then we will deal with that accordingly,” he said.

Despite the back and forth between the defense department and the military with the CPP-NDF and Sison, the 5th round of peace talks between the Philippine government and the NDF were set to begin Saturday, May 27, in the Netherlands.

Both Sison and the NDF panel said that Duterte himself had told the NDF’s Fidel Agcaoili that both sides should stand together against groups such as the “ISIS-affiliated and CIA-supported” Maute and Abu Sayyaf.

Sison also noted that the NDF panel has called on the CPP’s central committee “to reconsider” its orders to intensify NPA operations as a reaction to Lorenzana’s supposed statement.

The military and the rest of the Philippine government have repeatedly downplayed fears of state abuses under martial law. Many Filipinos still carry with them the memories of human rights abuses during martial law under the dictator Ferdinand Marcos. Philippine officials have insisted this will not be the case this time.

Duterte declared martial law and suspended the privilege of the writ of habeas corpus in Mindanao, following clashes between government troops and Maute and Abu Sayyaf Group members in Marawi City on May 23. Police and military were conducting a “surgical strike” to neutralize Abu Sayyaf leader Isnilon Hapilon, who is said to have direct contact with ISIS.

Government troops found themselves in clashes with members and supporters of the terror groups who had apparently embedded themselves in the city. Terrified Marawi residents posted photos of armed persons roaming the streets and hoisting ISIS flags in the city.

Duterte declared martial law in Mindanao while in Russia, less than 10 hours after the clashes began.

The Consitution sets the duration of martial law at 60 days maximum unless extended, subject to certain conditions. An extension requires congressional approval. The Supreme Court may also review the basis for Duterte’s declaration. – Rappler.com