Military may suspend air strikes after death of soldiers – Lorenzana 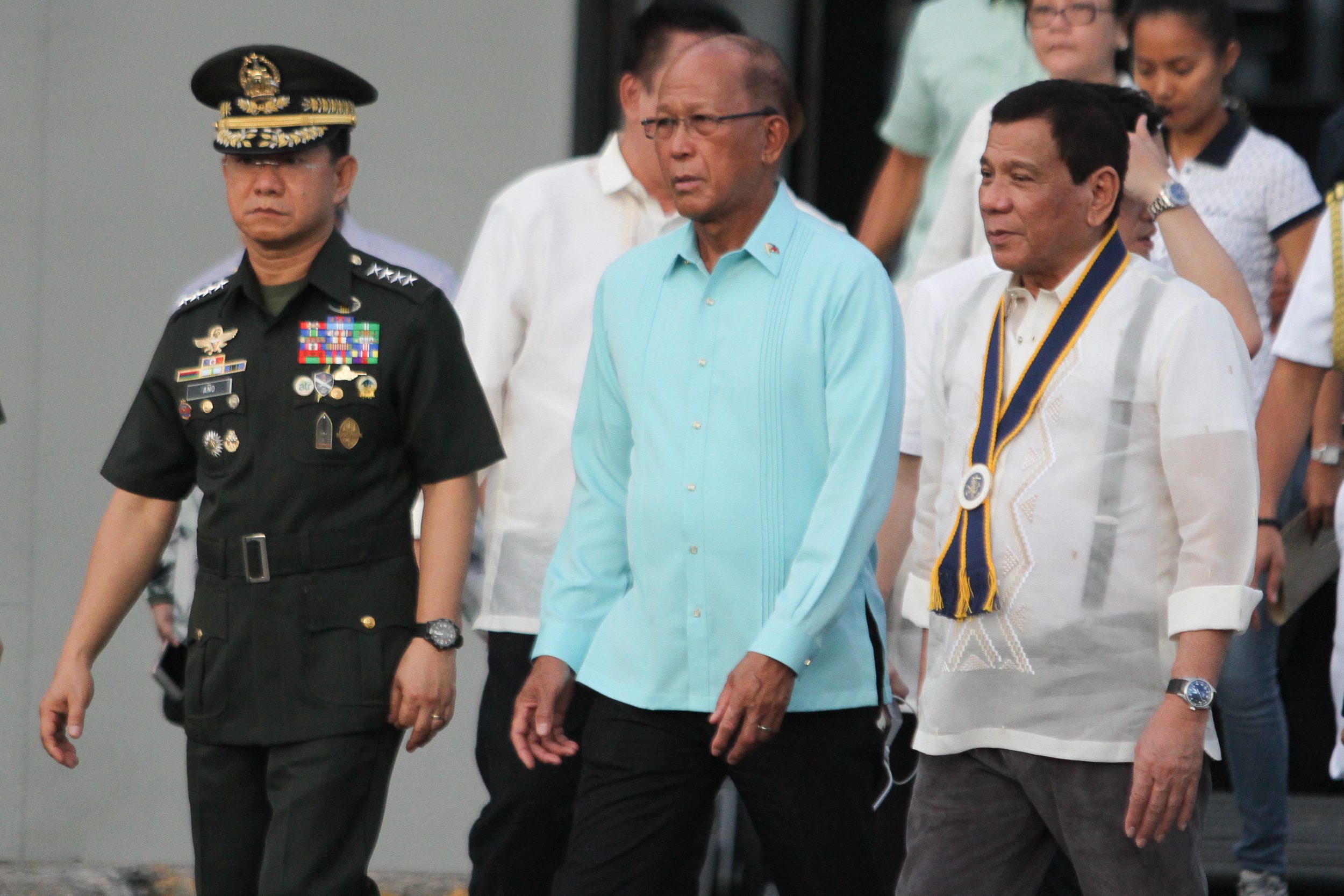 MANILA, Philippines – Government forces in Marawi City are limiting air strikes and reviewing their procedures following the May 31 air strike that killed at least 10 soldiers.

Defense Secretary Delfin Lorenzana, the administrator of martial law, said the military may decide to suspend air strikes from now on because of the incident and the evolving situation on the ground.

“We might suspend air strikes and let ground troops do their thing,” said Lorenzana on Thursday, June 1, during a Palace news briefing.

He explained that it was a conventional bomb, not a precision-guided missile, that accidentally hit troops.

Due to an “error,” the bomb hit the soldiers who were a good 100 meters away from its original target. It was the second of two bombs deployed in tandem. The first bomb hit the target “squarely.”

“We are trying to ascertain how it happened that the first hit the target, the second was far off. There must be some mistake there, either the men directing from the ground or the pilot,” said Lorenzana.

He said they had to use ordinary bombs because the military did not have enough precision-guided munitions at the time.

“We still have some precision-guided munitions. If they are released [they] will really hit the target indicated, but we did not have enough,” he said.

But due to the tragedy, the new policy on the ground may be to use only precision-guided munitions from now on.

“Probably, we have to limit air strikes to aircraft that can deliver accurately their ordnance,” Lorenzana said.

Suspending air strikes would also be wiser given the additional ground troops deployed to Marawi City. But Lorenzana will leave the decision to ground commanders.

“There are more troops on the ground. Chances of hitting our troops is very big like what happened yesterday,” he said.

Because of the isolation of Maute forces in specific strongholds in the city, air strikes may even become unnecessary, given the strategic value of using ground troops instead.

“There’s one strong pocket of resistance. If we can converge our troops there, the more we do not need air strikes, if we have more troops surrounding [Maute strongholds]. Maybe we need more armored vehicles,” said Lorenzana, adding that 21 armored vehicles were recently brought to Marawi.

Despite the setback due to the killed soldiers and failed air strike, Lorenzana is not moving his deadline for security forces to end the siege on Friday, June 2.

“The target is still there. Tomorrow afternoon (June 2), let’s see, the situation is very fluid. But we’re almost there, there are only a few pockets of resistance of the Maute,” he said.

Around 50 to 100 Maute Group members are supposedly concentrated in a “stronghold,” out of the roughly 500 at the start of the siege.

This stronghold, located across a bridge from Marawi City Hall, is “hard to crack,” hence the deployment of more battalions to the area, said Lorenzana.

Some of the 500 Maute Group members were reported by civilians as leaving the city in “small groups.”

The military has been receiving text messages from residents of nearby towns of the presence of Maute Group members who left the conflict zone. Operations against these persons will be pursued, said Lorenzana.

About the ill-fated air strike and its impact on the morale of soldiers, Lorenzana said that while the incident is a tragedy, such accidents can happen “in the fog of war.”

“Of course it will be very sad, very painful for the soldiers, their companions. We just have to explain to them that accidents happen. We have to assuage the sorrow of the families of those killed,” he said.

He mentioned the possibility of court-martialing military personnel who may be deemed responsible for the incident, but said he would wait for the results of the investigation. – Rappler.com