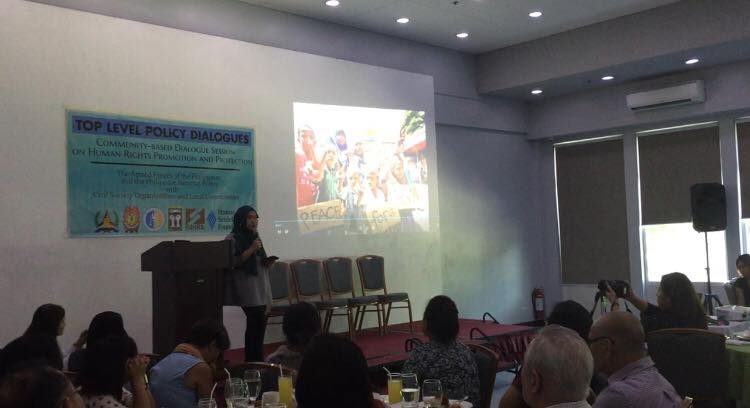 MANILA, Philippines – A youth Moro group called for the immediate termination of airstrikes over Marawi City on top of their pleas to lift martial law in Mindanao.

(We are calling for an end to airstikes because we are seeing that even civilians are being regarded as enemies of the government, we want to remind them that they are hunting down the Maute Group only but because of the continuing airstikes, the civilians feel they’re also the enemy.)

Gamao studied in Marawi and works as a government employee in Cotabato City. She goes home to Marawi City every weekend to her relatives. She has not been able to return since the declaration of martial law, but her relatives have managed to evacuate.

Gamao and fellow Maranaos, some of them displaced by the Marawi crisis, were in the capital to join several dialogues, including the martial law forum on Friday, June 2, led by civic groups, lawyers groups and representatives from the Commission on Human Rights.

Defense Secretary and martial law administrator Delfin Lorenzana said they are looking into suspending airstrikes due to the deaths of soldiers.

On Thursday, June 1, the military’s airstrike killed 10 of their own because they missed their target.

The first plane hit its target accurately, while the second one missed its target by around 100 meters and instead hit the soldiers, said Lorenzana.

The military has repeatedly given assurances about civilian safety from their aistrikes but the recent error was used as an example by former human rights chair Etta Rosales during the forum to bolster calls to end the airstrikes.

As of the latest update, there are 2,000 civilians that remain trapped in Marawi City, most of them in areas controlled by terror group Maute.

Some of the civilians who have not managed to evacuate reported their homes being hit by the airstrikes.

Gamao said that martial law in Mindanao is now triggering animosity among Mindanaoans victimized by the martial rule of the late president Ferdinand Marcos.

(We’re also focused on Duterte’s rape joke because many women who experienced martial law experienced that kind of abuse.)

These triggers, combined with what she said are “accumulated frustration” over the halted peace process on the Bangsamoro are being used as a pitch by recruiters.

Gamao said she encountered personal stories of this when they traveled to schools in rural areas in Lanao during the crafting of the Bangsamoro Basic Law (BBL).

(Here is where we see the entry point of extremism. They tell them not to count on the government anymore. They are activating the frustration and disappointment of the people there so they could recruit.)

Rosales said she is talking with officials and civic workers on the ground to formally organize and send their representative to the crisis committee in Marawi, so they could officially enter their position to call for the end of airstrikes.

Mohammad is one of the 71,000 people who have been displaced by the crisis in Marawi City. (READ: How to help Marawi evacuees through DSWD)

(They tell those in Manila to not believe what we say because they don’t live there. Here we are now, help us call for help. It took me 4 days to leave my cottage and still we anticipate that if martial law lasts for 60 days, our homes will be destroyed because there’s nobody there.)

Under the IDP bill, arbitrary displacement of people is penalized to protect the rights of IDPs.

(In the IDP bill we’ll know what the prohibited acts are, the responsibilities of different agencies and the penalties, we ask for your support to call your congressmen and expedite the process.) – Rappler.com