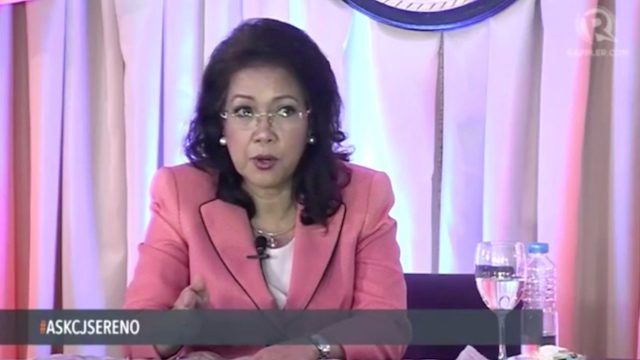 MANILA, Philippines – Chief Justice Maria Lourdes Sereno on Thursday, July 27, clarified that the Supreme Court has not stopped the distribution of all contraceptive products.

Sereno made the clarification 3 days after President Rodrigo Duterte implied in his State of the Nation Address that the SC’s temporary restraining order (TRO) also covered contraceptive medicine and pills that had been purchased by the government.

“By the express terms of the Court’s Decisions, there is no TRO against the implementation of the Reproductive Health or RH Law or all contraceptive products,” Sereno said in a statement on Thursday, July 27.

Sereno said that the TRO applies only to two brands of contraceptive implants – Implanon and Implanon NXT.

The High Court’s TRO directs the Food and Drug Administration (FDA) to rule whether the two brands of implants have abortifacient agents. The SC said in its latest decision affirming the TRO that the FDA can sooner resolve this if only the Department of Health would conduct summary hearings.

Sereno reiterated these rulings on Thursday.

“The TRO also has a sunset provision – as soon as the FDA certifies as provided by law that they are not abortifacient, the TRO is lifted. The reason why the TRO has not been lifted yet is not with the Court but with the FDA,” Sereno said.

When the SC issued the TRO in 2015, it also prohibited the FDA from “granting any and all pending application for reproductive products and supplies, including contraceptive drugs and devices.” This was due to the petitioners’ complaint that FDA registered and recertified the drugs and devices without holding hearings and consultations.

This led advocates and even the Commission on Population (PopCom) to express fear that 90% of contraceptive brands will no longer be available by 2018.

Duterte’s message to Sereno during the SONA on Monday echoed those fears.

“May nagfile sa inyo sa Supreme Court, nag-issue kayo ng TRO (Someone filed a petition before the SC, and you issued a TRO). In the meantime ang gobyerno nagbili ng medisina, mga pills (the government bought medicine, pills), it was not a reckless purchase, it was preparation in the implementation of law. Medicines will expire next month,” Duterte said. – Rappler.com