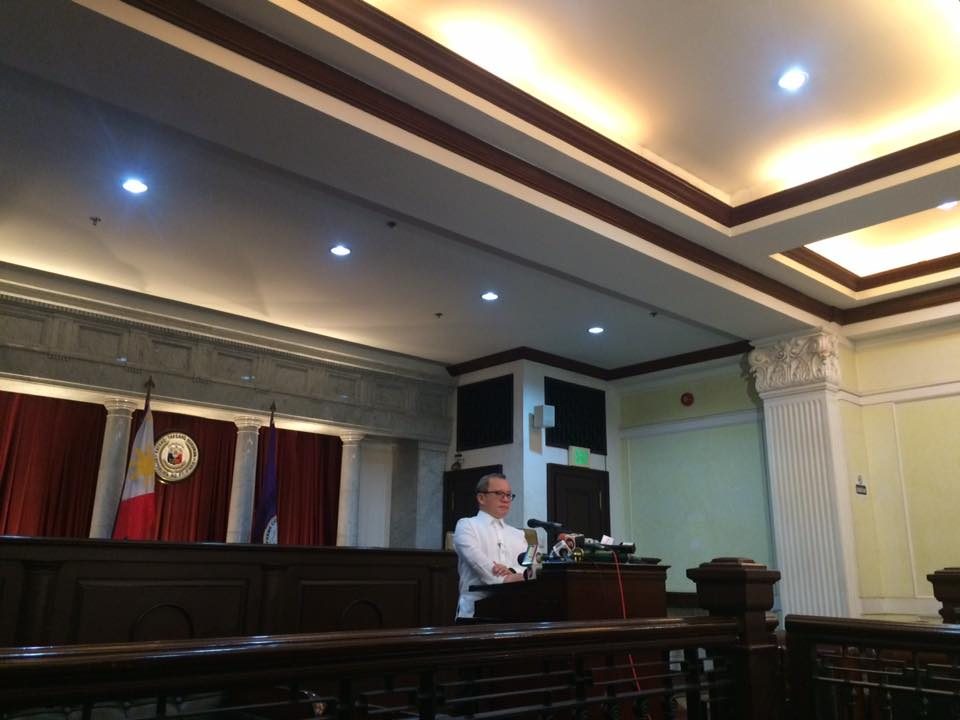 SC Spokesman Theodore Te said in a news conference on Tuesday, August 8, Sereno did not take part in the voting.

The High Court will provide authentic copies of 6 of the 7 documents requested for by the Volunteers Against Crime and Corruption (VACC) and Vanguard of the Philippine Constitution. The groups sent their request letter to SC on August 4, or two days after filing an unverified and unendorsed complaint before the House of Representatives.

The SC refused to release the 7th item requested, which is the memorandum sent to justices by Associate Justice Teresita Leonardo de Castro questioning some of Sereno’s actions which were supposedly done without the approval of the court en banc.

The High Court said it cannot release De Castro’s memorandum because “it remains a matter that is being internally deliberated by the Court, and thus cannot be released until the matter is resolved by the en banc.”

De Castro’s memorandum is heavily echoed in the VACC and Vanguard’s unverified complaint.

It questioned the appointment of Philippine Mediation head Brenda Jay Mendoza, travel allowance grants to Sereno’s staff, and delays in filling up vacancies in the Supreme Court.

SC will release to the groups the following documents:

On Tuesday, former Arroyo counsel Larry Gadon sent his own request letter to the SC for documents in addition to the ones requested by the VACC and Vanguard. Gadon is preparing his own impeachment case against Sereno. Gadon wants to have his hands on the result of Sereno’s psychological examinations, which she was required to undergo when she applied for Chief Justice.

A copy of Gadon’s actual impeachment complaint obtained by reporters show the lawyer will accuse Sereno of failing her psych exams, with the report supposedly saying she was “dramatic and emotional.”

In Gadon’s request-letter, Gadon also wants documents on the foreign travels of court spokesman Te. Asked about it by reporters on Tuesday, Te declined to comment.

Gadon is also requesting copies of Sereno’s Statement of Assets, Liabilities and Net Worth (SALN). The lawyer is accusing Sereno of concealing in her SALNs millions worth of earnings from when she was a private lawyer who won for the government an airport contract dispute.

Gadon also wants copies of all documents pertaining to the purchase of a P5.1-million Toyota Land Cruiser for Sereno. A budget circular allows the Chief Justice to have a luxury vehicle for security purposes.

According to Gadon’s letter-request, two motorcycles were also bought to escort Sereno.

Gadon is also requesting a copy of a letter supposedly sent by Sereno to De Castro in May or June 2013, where the Chief Justice allegedly “admitted she deliberately changed recommendation made by the latter in the Temporary Restraining Order (TRO) in Coalition of Associations of Senior Citizens in the Philippines vs Comelec.” (READ: Scrutinizing Sereno, one year after)

Gadon has yet to file his impeachment case before the House of Representatives, as he’s still looking for a congressman to endorse it and still collecting documents to back up his case.