How Revilla’s team is defending him in his plunder trial 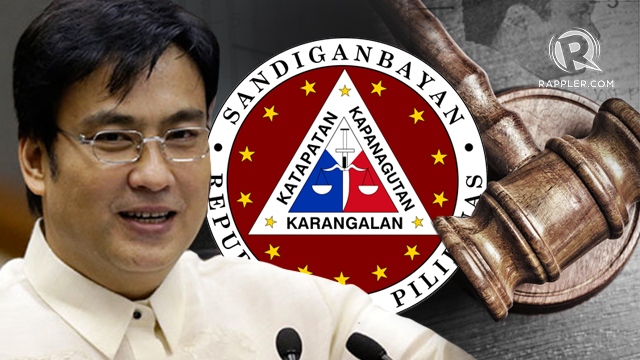 MANILA, Philippines – The camp of former senator Ramon “Bong” Revilla Jr has set its sights beyond just posting bail. It now wants the ultimate resolution to his multimillion-peso plunder case – the dismissal of the charges as soon as possible, without the need for Revilla to  present his own evidence.

Following the bail grant to former senator Jinggoy Estrada on September 15, Revilla’s lawyers announced that they would again seek the temporary liberty of their client. But weeks later, they dropped the plan and bared their new legal tack.

“Rather, we will file [a] demurrer which means the case is over, nothing to have bail for,” a grinning Estelito Mendoza, Revilla’s lead lawyer, said on October 4. He chuckled after the announcement.

The prosecution has rested its case after 3 months of trial. Normally, the defense would follow with its evidence but defendants are given the choice to file a demurrer instead. A demurrer is something you file after the prosecution rests its case to have your charges dismissed based on weak evidence.

“Siyempre, ninenerbyos ako (Of course, I’m nervous),” Revilla said, when asked about the move. This legal strategy would have you believe that his lawyers are that confident. Mendoza’s demeanor in court aims to project this confidence, too.

Mendoza, who served as solicitor general during the Marcos regime, is considered a legal luminary and is known for his ways of intimidation.

The 87-year-old Mendoza, who has difficulty walking, wears rubber shoes to court. His speech is sometimes muffled, and he coughs often. He wears a hearing aid and has an assistant who transcribes court proceedings, real time. When he does a cross-examination of a witness, a tablet synced to his assistant’s laptop is placed near the witness stand so he can read from it. (READ: Estelito Mendoza and his 2017 comeback in plunder cases)

But when he opens his mouth, everyone stops to listen. Even the justices give way.

Into its third month, the plunder trial is yet to be explosive. The prosecution has presented local government officials who testified that the projects meant for their districts funded with Revilla’s pork barrel were never implemented, or at least not to their knowledge.

On this note, Revilla plays the victim. He said whoever falsified the documents should be penalized, not him.

The prosecution also presented bank officials who testified on the accounts of Revilla and his family. Revilla likes to remind reporters that he’s a movie star – he earned a lot from show business, so the bank accounts check out.

So Mendoza asks: How can the prosecution connect the dots?

Although Revilla’s camp insists the testimonies of the bank officials prove nothing, it still tried very hard to block them.

In late September, the Revilla camp made a fuss over subpoenas.

“There is no subpoena duces tecum!” Mendoza exclaimed before the court on September 14.

A subpoena duces tecum orders a person to bring relevant documents to court.

This was a contention because prosecutors brought to court officials of different banks, hoping to thresh out the documents to prove the existence of dirty money. But how can they go through the documents, asked Mendoza, when it’s prohibited under the bank secrecy law?

The issue is that the Court of Appeals (CA) in 2013 authorized the Anti-Money Laundering Council (AMLC) to investigate the bank accounts of Revilla, Estrada and former senator Juan Ponce Enrile over charges stemming from the Priority Development Assistance Fund (PDAF) scam.

The argument of the defense is that the CA only authorized the AMLC to scrutinize the bank accounts. The prosecutors, however, point to subpoenas issued by the anti-graft court Sandiganbayan. They said that a court subpoena on the documents gathered by the AMLC is all they need to have the bank accounts brought to court for scrutiny.

“The subpoena doesn’t cover the document! There is no basis to this testimony of this witness,” Dennis Buenaventura, lawyer of alleged pork barrel scam mastermind Janet Lim Napoles, passionately argued on September 19.

That day, Buenaventura was able to prove that the court issued only a subpoena ad testificandum – a writ ordering a person to go to court, not for the person to bring documents to court. (READ: Revilla father, son transacted with Napoles – witness)

“What are these documents?” the prosecutor began to ask.

Buenaventura quickly objected, but Econg said, “He was asked what is the document, he is not being asked to produce the document.”

When the prosecution rested its case on October 3, they were dealt another blow. The Sandiganbayan’s First Division ruled to exclude a P190-million Special Allotment Release Order (SARO) issued in February 2010 under Revilla’s name.

The court excluded it because the prosecution did not present it during the preliminary investigation. Mendoza said it was irrelevant.

Lead prosecutor Joefferson Toribio had hoped to use the SARO as basis for their allegation that Revilla earned P33.5 million worth of kickbacks in 2010.

Given Mendoza’s demeanor in court, there might have been a perception that the prosecutors were losing if it were a public trial. But Toribio likes to remind everybody that the prsecution has a smoking gun.

Lest the public forget, in 2014, the AMLC already took the witness stand in Revilla’s bail hearings. In that testimony, AMLC lawyer Leigh Vhon Santos said that P87 million in cash deposits in Revilla’s account matched Benhur Luy’s financial records. The deposits to the Revilla accounts were made within the dates that appear on Luy’s ledger of when he delivered kickbacks to Revilla et al.

Santos also said that the accounts of Napoles’ nongovernmental organizations in the Land Bank of the Philippines appear to be temporary storage of money. “Withdrawals take place almost on the same day deposits are made,” Santos said then.

In the plunder trial, an official from Landbank testified that one of the withrawals amounted to P5 million.

Though the defense team was partly successful in limiting the testimonies of bank witnesses in the trial proper, will AMLC’s comprehensive report be enough to pin down Revilla?

The Filipino people should definitely keep a close watch. – Rappler.com