Ombudsman hits back: We won’t be intimidated 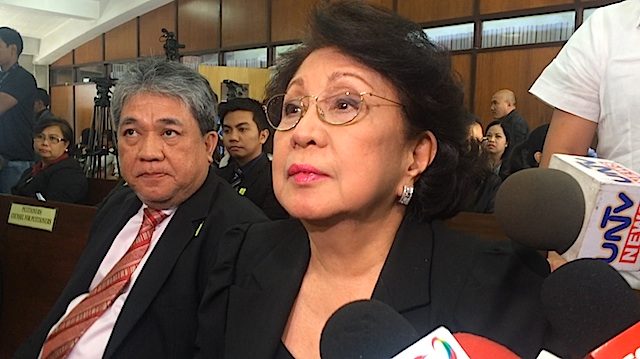 MANILA, Philippines – “Sorry, Mr President but this office shall not be intimidated,” Ombudsman Conchita Carpio Morales said in a statement on Friday, September 29, a day after President Rodrigo Duterte said he would have Morales investigated for alleged “partiality.”

The Office of the Ombudsman hit back in the face of a threat by Duterte to investigate Morales and her Office.

“The President’s announcement that he intends to form a commission to investigate the Ombudsman appears to be a retaliation to our ongoing investigation. We will, nonetheless proceed with the probe, as mandated by the Constitution,” the Ombudsman said.

The Ombudsman is also standing by the media statements of Overall Deputy Ombudsman Arthur Carandang on bank transaction records of Duterte and his family. Carandang said the records from the Anti-Money Laundering Council (AMLC) show a flow of money that would amount to P1 billion.

“As to the documents in our possession, we stand by our word,” the Ombudsman said.

On Thursday evening, the AMLC released a statement saying it is not the source of “documents and information attached by Senator Antonio Trillanes IV in his complaint regarding the alleged bank acounts of President Rodrigo Duterte.”

Trillanes, however, never claimed the AMLC to be his source. His request in April for access to the documents was denied by the AMLC.

In the statement, the AMLC also said “it has neither provided the Office of the Ombudsman with any report as a consequence of any investigation of subject accounts for any purpose.”

Carandang told Rappler that while they’re in possession of bank transaction records, the AMLC has yet to provide them a report. (READ: Panelo hits Ombudsman exec for ‘disclosing’ Duterte bank records)

The report will establish whether there is irregularity or anomaly in the bank transactions.

The Ombudsman will proceed with its probe, acting on the plunder complaint of Trillanes alleging P2.4-billion worth of deposits in Duterte’s account and that funds could be coming from a possible scheme of hiring ghost employees in Davao City.

Malacañang had earlier said Duterte has nothing to hide; Davao City Mayor Sara Duterte said she welcomes the probe.

Morales had already said she has inhibited from all Duterte-related complaints before her office. She is related to Duterte by marriage – her brother, lawyer Lucas Carpio Jr, is the father of Manases Carpio, the husband of Duterte’s daughter, Davao City Mayor Sara Duterte-Carpio.

On Duterte’s accusations of partiality, the Ombudsman said: “We have always welcomed the efforts to help us continue to cleanse our ranks.”

“Out Internal Affairs Board has entrapped and removed Ombudsman officials and employees for various offenses,” Morales said. – Rappler.com