Oct 9, 2017 12:59 PM PHT
Lian Buan
Facebook Twitter Copy URL
Copied
Divina says this is just the first of the 'many complaints we will be filing nearly every day' 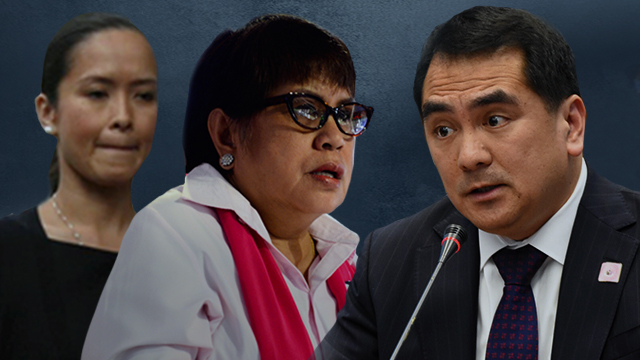 In the 2 complaints filed on Friday, October 6, Divina was seeking a total of P120 million in damages from Kapunan and Bautista.

Divina’s libel complaints against the two root from the publicized disbarment complaint against him, and Kapunan’s statement linking Divina to the death of UST law student Horacio Castillo III.

Divina warned Kapunan that this is just the first of “many complaints we will be filing nearly every day.”

“For every single defamatory statement she makes, we will be filing complaints. We will bury her with an avalanche of cases. The more she fabricates, the deeper the grave she is digging for herself,” Divina said in a statement.

“Truth is a defense in a libel case and truth is on our side,” Kapunan said when asked for comment.

The 16 counts are from the 16 media outfits which carried the story.

“The unequivocal insinuation is that complainants committed corrupt acts or wrongdoing through the supposed payments they made to Andres Bautista in order to favor complainants’ client/s. This is beyond doubt defamatory,” the complaint said.

Divina said that it is a “settled rule that a disbarment proceeding against a lawyer is confidential in nature precisely to protect the personal and professional reputation of attorneys from the baseless charges of disgruntled, vindictive, and irresponsible clients and litigants.”

Divina cited an SC ruling from 2013 which said that “the premature disclosure by publication of the filing and pendency of disbarment proceedings is a violation of the confidentiality rule.”

For this 1st complaint, Divina is seeking P50 million in moral damages and P10 million in exemplary damages.

The impeachment complaint against Chairman Bautista has been junked by the House of Representatives. The Department of Justice (DOJ), through its attached agencies National Bureau of Investigation (NBI) and Bureau of Internal Revenue (BIR), are still investigating both Bautista and Divina.

The Office of the Ombudsman is also conducting its own probe, while the  Anti-Money Laundering Council (AMLC) is investigating the bank deposits.

The 2nd libel complaint was filed against Kapunan before the Quezon City Prosecutors Office for a television interview where the lawyer said Divina recruited Castillo to Aegis Juris fraternity.

Divina is an alumnus of Aegis Juris, the fraternity which allegedly carried out that hazing rites that killed Castillo on September 17.

Divina quoted Kapunan of telling ANC that “it was the Dean himself” who recruited Castillo to Aegis Juris “with the assurance that there is no physical activity or hazing.”

“To make matters worse, respondent also accused me during the same interview of coddling the fraternity members who supposedly participated during the initiation rites of Horacio immediately after the latter’s death,” the complaint said.

For this, Divina filed 3 counts of libel because it was carried by ABS-CBN on television via ANC, on their news website and on their Facebook page.

Like the first complaint, Divina is seeking P50 million in moral damages and P10 million in exemplary damages.

“P120 million can never approximate the value of my integrity as a lawyer and as a person,” Divina said.

Divina added that the money “will be donated to the promotion and education of anti-hazing and to further all efforts to eradicate hazing in the country.” – Rappler.com