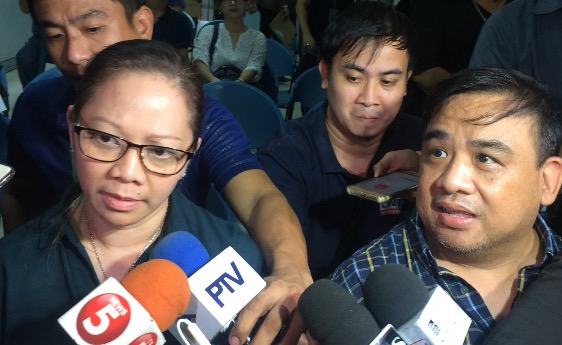 MANILA, Philippines (UPDATED) – The camp of Aegis Juris fratman John Paul Solano claimed on Tuesday, October 24, that freshman law student Horacio Castillo III may have died of a pre-existing heart condition, and not of hazing.

Solano said in his counter-affidavit that the medico legal report indicated that Castillo has a heart condition called Hypertrophic Cardiomyopathy (HCM).

Solano brought witnesses to the preliminary investigation of the Department of Justice (DOJ) on Tuesday, and subscribed to their counter-affidavits. Solano is among the fratmen facing murder charges for the death of Castillo.

As for the complaint of violation of the Anti-Hazing law filed by the police against him, Solano said he was neither aware nor present in the initiation rites of Aegis Juris.

(READ: What’s inside the Aegis Juris alumni chat box when Atio was killed)

Solano pointed out that that the medico legal report never identified Castillo’s cause of death. Instead, it said Castillo has HCM, which Solano said, is consistent with another medico legal finding that Castillo’s heart was found to be enlarged and weighed 450 grams.

Solano said that without a clear cause of death, he cannot be charged with murder. (READ: A tale of 2 mothers in the Atio Castillo hazing ‘coverup’)

“What is clear from the said Medico Legal Report is that Horacio has HCM which is a pre-existing heart condition of Horacio,” Solano said.

Solano invoked his experience as a licensed medical technologist and said “patients with HCM have an increased risk for cardiac failure.”

Furious, Castillo’s mother Carmina denied that her son has a heart condition.

Horacio’s father and namesake criticized the use of Solano’s expert opinion. “He’s a medical technologist, he’s not a doctor. They should get a cardiologist,” he said.

Esmaquel said they have brought some of Solano’s surgeon relatives as witnesses.

Asked if they would get an independent expert witness – someone not related to Solano – Esmaquel said yes.

Solano accused the Manila Police District (MPD) and Castillo’s parents Horacio and Carmina of “conveniently omitting” the details in their complaints.

WATCH: John Paul Solano's lawyer Paterno Esmaquel Sr says they would get independent doctor to back up claims pic.twitter.com/3vhOLEwDNU

Castillo’s father cited an autopsy, which said his son died of “blunt trauma coming from hazing.”

This is the copy of MPD's medico legal report as cited by the Solano camp. These are photocopied and typed out versions. @rapplerdotcom pic.twitter.com/SNXhFeSvdZ

Esmaquel added that officers from the MPD told senators in public hearings that Castillo’s body could no longer be subjected to autopsy because it had been embalmed.

Solano’s counsel called it a “blatant lie.” He said the MPD just concealed the medico legal report because the findings “were adverse to complainants.”

Solano also said the medico legal report did not indicate that there was injury to Castillo’s kidneys.

“If indeed it is true that Horacio is a victim of hazing where he suffered severe physical trauma….Horacio’s kidneys should have acquired some degree of kidney injury due to accumulation of myoglobin and the same could be a cause of acute kidney injury/failure resulting to multiple organ failure,” Solano said. – Rappler.com