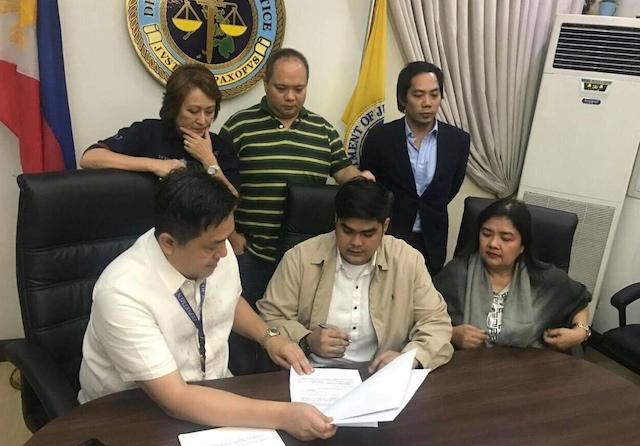 Ventura told the investigators everything he knows about the hazing and death of Castillo, Justice Secretary Vitaliano Aguirre II said on Wednesday.

Ventura signed the formal acceptance of admission to the Witness Protection Program (WPP) that afternoon. He was accompanied by his mother, Merlene, and lawyer, Ferdie Benitez.

Aguirre said once Ventura enters the WPP, he would no longer be considered a suspect.  He added that although the WPP is open to everyone except the most guilty, Ventura’s testimony might already stand on its own.

“Parang no need na [There may be no need anymore) [for other witnesses]. Even without any corroborative testimony, I believe his statement will stand in  court,” Aguirre said.

Ventura, who admitted to participating in the initiation, named every Aegis Juris member present at the initiation rites of Castillo, said Aguirre.

If John Paul Solano testified to seeing only 6 fratmen the morning he came to the fraternity library, Aguirre said Ventura named more than the 16 individuals who were already on the Department of Justice’s Immigration Lookout Bulletin Order.

When Castillo was being hazed, Ventura told investigators that there were others holding a karaoke session to mask the noise from the initiation rites, Aguirre said.

Ventura also said that Castillo was beat up severely until his muscles swelled.

(The first physical punishment began with punching his arm. There were about more than 10 who punched him, and they have a term that they would just continue punching him until his arm swelled.)

Aguirre said after the fratmen saw Castillo’s arm swelling, they tapped the affected area with a spatula to “calm his muscles.” Aguirre said everybody took part in the hazing at this point.

The justice chief said based on the narration of Ventura, the third and final part of the initiation was the paddling ceremony. The person being initiated was supposed to get 10 paddles but “for the leader of the batch it would be 11, and if you’re solo, you’ll be given 11 paddles.”

Ventura told investigators that when fratmen saw Castillo move after he collapsed, they struck him a 5th time. “Lalong nagcollapse (He collapsed even more),” Aguirre said.

Aguirre said that according to Ventura, some of the fratmen suggested dropping melted candle wax on Castillo to force a response.

Aguirre said that that’s when the fratmen called up Solano, a licensed medical technologist.

This effectively delayed medical response on Castillo because they had to wait for Solano. Solano already testified to performing CPR on Castillo but to no avail.

Solano said in his counter-affidavit on Tuesday, October 24, that the medico legal report indicated that Castillo might have died of a pre-existing heart condition – Hypertrophic Cardiomyopathy (HCM) – and not of hazing. Senators slammed the suggestion.

Aguirre said that it was a week-long initation activity for Aegis Juris.

Ventura, according to records, was enrolled for his freshman year at the University of Santo Tomas (UST) Faculty of Law, Aguirre said. He was on leave at the time of the initiation, Aguirre added.

“The decision of Mark Ventura, one of the Aegis Juris members involved in the hazing of Atio Castillo, to come out and shed light on the facts is a most welcome development. I commend the Department of Justice, in particular Secretary Aguirre, for his relentless efforts to reach out to possible witnesses by offering them protection through the Witness Protection Program. This only shows his commitment to ferret out the truth and bring to justice those who may be responsible,” Divina said.

“I trust that Mr Ventura will tell the whole truth in the spirit of remorse. I hope that others will follow suit,” he added. – Rappler.com