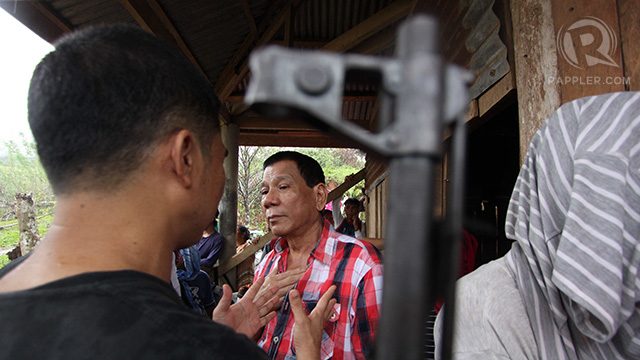 COMPOSTELA VALLEY, Philippines –  On Wednesday, December 26, residents and guerilla fighters of the New People’s Army cheered as a white chopper started to descend at a basketball court inside a guerilla zone somewhere in Compostela Valley.

The chopper was occupied by Davao City Vice Mayor Rodrigo Duterte who chose to visit during the guerilla camp anniversary of the re-establishment of the Communist Party of the Philippines.

Duterte is running for Mayor of Davao City to replace his daughter, Sara, who announced earlier that she is giving way to her father.

During the visit, Duterte gave the NPA unit an unspecified amount of money and delivered a speech blaming abnormal weather disturbances and climate change on environmental destruction brought about by first world countries. 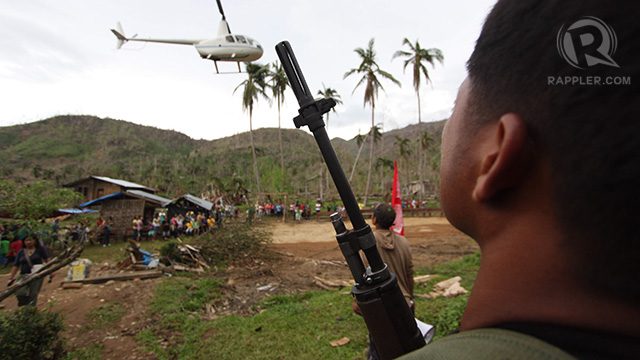 Speaking through a megaphone, Duterte said he traveled outside his city to express his solidarity to the victims of Typhoon Pablo. “I am here in solidarity with you. I am deeply saddened with your present situation,” Duterte said.

Duterte entrusted an unspecified amount of money to the NPA unit in the area explaining that the money would be used to “rebuild the lives of the people”. He said the amount is “apart from the tax I am paying to the NPA.”

Stating humanitarian purposes, Duterte remarked that the military must not take his actions maliciously.

“For spies who are here right now, do not worry because this is for the masses. This is to restart the circulation of money because right now that people has no money,” Duterte said.

Duterte also committed to immediately send chainsaws, nails and other construction materials for the reconstruction of houses in the village.

“We should survive. You cannot surrender,” Duterte encouraged the residents. Duterte also commented on how abnormal weather disturbances are not isolated in the country but are also happening across the globe.

“This is happening because of the continuing destruction of the environment. We have been long warned by scientists about climate change,” Duterte said.

In a trademark speech dotted with expletive remarks, Duterte condemned First World countries and multinational corporations for the destruction of the environment.

“First world countries like the United States, Europe and China are the major pollutants in the world. The NPA has been always right. What they are teaching you is not wrong,” Duterte said.

“We are suffering from the mistakes of rich countries. It is just ok for them because they have the money to construct buildings that can reach the sky and never be reached by floodwaters,” Duterte added.

It appears that Duterte’s message was received well.

Arturo, a 43-year old resident of the village, said he believes that Duterte and the NPA were right in their analysis.

“The greediness of imperialist countries and big corporations which caused the destruction of the environment must be chopped down,” Arturo said.

He added that the assistance provided by the communists and Duterte is a big help for their village, which is rarely reached by aid workers because of its location. – Rappler.com