Sereno camp points to Carpio on the Jardeleza integrity issue 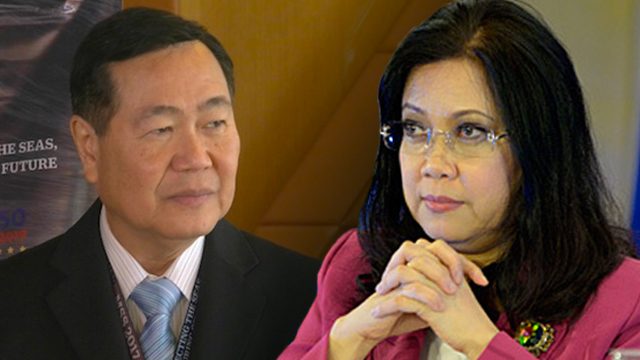 Facebook Twitter Copy URL
Copied
Justice Carpio is the leading Filipino scholar on the issue of the West Philippine Sea, a point of contention in Jardeleza's SC nomination in 2014

Jardeleza accused Sereno of committing an act of treason when the Chief Justice allegedly “illegally secured” a top secret document and compromised the West Philippine Sea arbitration case in the integrity issue raised when he was still applying for justice.

Carpio is a leading Philippine scholar in the West Philippine Issue, and even went on a round of lectures during the time that the country was engaged in an arbitration case before the Hague-based tribunal.

Jardeleza said the accusation against him of disloyalty to the Republic  was “inhuman.” As he was applying for a post at the Supreme Court (SC), JBC ex-officio chairman Sereno raised the integrity issue, thereby invoking the unanimity rule.

Under JBC rules, if an applicant faces integrity issues, she or he has to have a unanimous vote to be part of the short list. Other applicants are merely required to get the most number of votes.

“What the JBC did was simply to heed Justice Carpio’s concerns,” Cruz said.

In the end, it was still the decision of the JBC, which Carpio is not a member of.

That other member seems to be Milagros Fernan-Cayosa, the Integrated Bar of the Philippines’ representative to the JBC, who remains as such.

“Cayosa told the JBC that while she had voted for Jardeleza ‘she could not vote for him this time.’ Based on her own study and investigation of Jardeleza’s background, she was able to validate the issues raised against him that cast serious doubt on his integrity,” wrote the late Aries Rufo in an investigative report on Rappler in 2014.

Another JBC member who comes at play in this issue is then justice secretary Leila de Lima. When Jardeleza was debating with Philippine team lawyer Paul Reichler whether or not to include Itu Aba in the pleading, it was De Lima who finally convinced former president Benigno “Noynoy” Aquino to go with Reichler.

Jardeleza’s exclusion of Itu Aba was Carpio’s beef with him, which later swayed Sereno into invoking the unanimity rule due to questions of integrity.

During the hearing, Jardeleza said that Sereno used Reichler’s memorandum to Aquino as evidence against him.

(The question is, this was a purely executive department activity. The judiciary was not part of this. The question is, how did the Chief Justice get the memorandum? Who gave it to her?)

“We’re not certain as to what memorandum Justice Francis referred to yesterday. I personally believe (Justice Carpio) did not need to refer to anyone else’s ‘memo’. We are all aware of Justice Carpio’s expertise on this matter,” Cruz said.

Carpio will reportedly attend the hearings when they resume in January 2018, according to a report in The Philippine Star.

Apart from the question of whether or not the testimonies of justices point to an impeachable offense, they expose division and cracks in the Supreme Court. – Rapppler.com