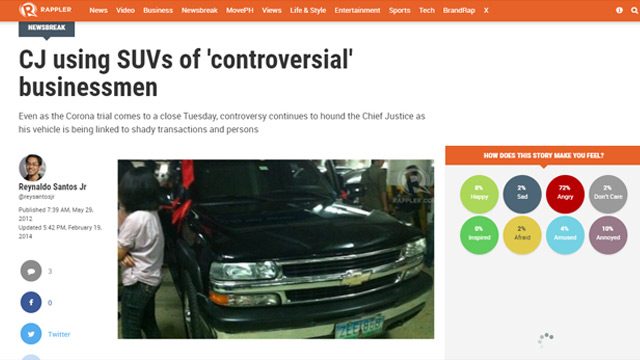 Facebook Twitter Copy URL
Copied
The complaint is filed by Wilfredo Keng, a businessman Rappler reported on in 2012 for alleged favors given to impeached Chief Justice Renato Corona

MANILA, Philippines – The National Bureau of Investigation (NBI) on Thursday, January 18, sent subpoenas to Rappler CEO Maria Ressa and a former reporter over a complaint for violation of the cybercrime law.

The complaint was filed by Wilfredo Keng, a businessman whom Rappler reported on in 2012 for having supposedly lent his SUV to the late former chief justice Renato Corona.

Reynaldo Santos Jr, then a reporter for Rappler’s Research and Investigative unit, authored the report. Santos is no longer connected with Rappler.

In 2012, as Corona’s impeachment trial was drawing to a close, Santos reported that then chief justice had been seen using a black Suburban in and out of the Supreme Court (SC).

The vehicle was traced by the Land Transportation Office (LTO) to Keng. Keng admitted to Rappler he owned a black Suburban with the same plate number, but denied it was the same vehicle photographed at the basement of the SC.

Keng’s company figured in a mining rights lawsuit resolved by the Court of Appeals. The CA favored Keng’s company.

Santos and Ressa are required to appear at the NBI and submit evidence on January 22.

A subpoena based on the same complaint was also sent to businessman Benjamin Bitanga. Bitanga is incorporator of Dolphin Fire, which is a shareholder in Rappler Holdings.

Bitanga does not sit on the board of Rappler Incorporated.

It’s Benjamin’s son James, who sits on the board of Rappler Incorporated.

NBI could be going by the column of former journalist Rigoberto Tiglao, where he falsely claims that Bitanga owns Rappler.

Solicitor General Jose Calida, who initiated the investigation into Rappler’s ownership, said he was prompted by reports particularly that of Tiglao.

All 3 subpoenas, signed by NBI Director Dante Gierran, were dated January 10, a day before the Securities and Exchange Commission ruled to revoke Rappler Inc’s registration.

Aguirre said the probe could also look into “other laws” that may have been violated by Rappler.

Rappler slammed the investigation as a fishing expedition, meant to harass the news organization and silence a critical press. – Rappler.com