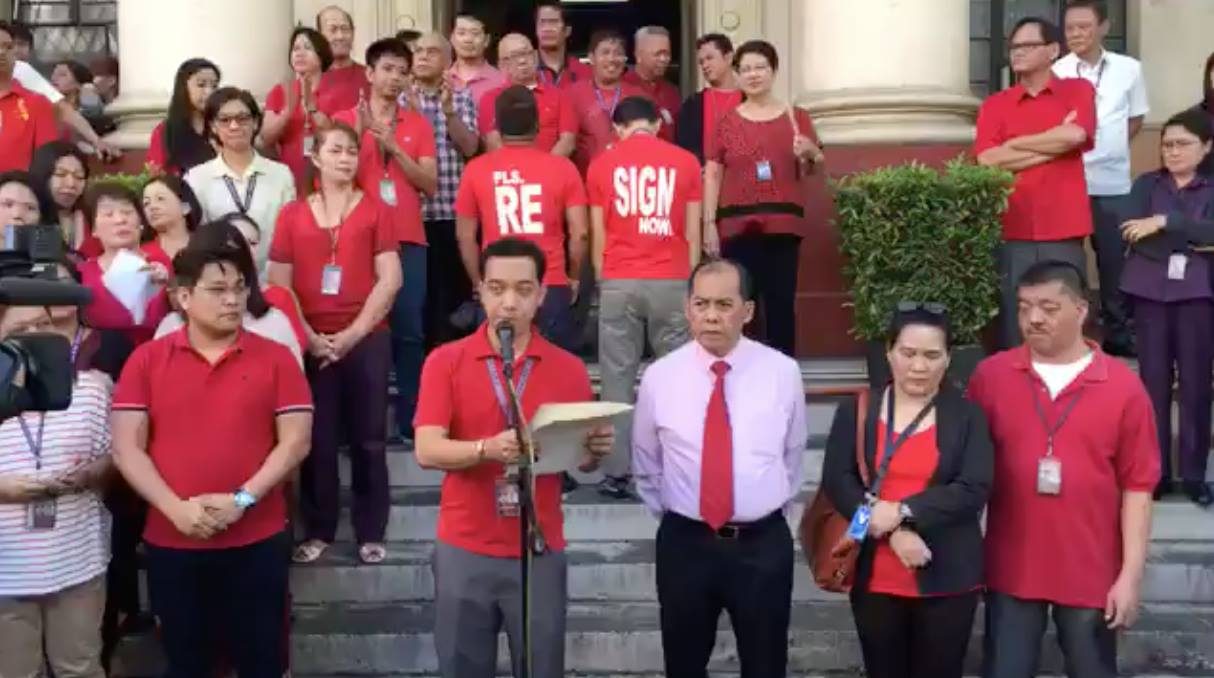 Facebook Twitter Copy URL
Copied
(3rd UPDATE) 'We are calling on you, also for the benefit of the entire nation, to step down as Chief Justice,' they tell Chief Justice Sereno

The statement also said: “The pending impeachment proceedings in recent months have put the entire judiciary in disrepute, thereby affecting the honor and integrity of its justices, judges, officials have pitted against each other resulting in a distressing atmosphere. This is aggravated by the fact that the Court en banc has taken cognizance of the petition for quo warranto and ordered her to file her comment thereto, instead of dismissing it outright.”

“The Court can no longer endure a prolonged environment of this kind. Its officials and personnel, truly dedicated and conscientious public servants, cannot go through another set of hearings and go against each other again in the Senate.”

Addressing Sereno, the statement said: “Chief Justice, let us please not allow history to judge you as the first woman Chief Justice, and the youngest at that, to be removed from office.”

(For our association, we are not downplaying the contribution of our Chief Justice to the judiciary. She has been very kind to our group, but our joining the call [for her to resign] is based on the big picture that we see. It’s for everyone. This, like what was read, is painful and difficult to do.)

Reyes added that among the judges’ grievances is their pending health benefits.

SCEA president Ocson said that employees are against “acts and policies” of the Chief Justice, including the slow pace of approval of their promotions and benefits.

“Nagkaroon ng demoralization among the ranks, hindi nagmu-move itong mga empleyado, supposed to be matagal na serbisyo, isa sa mga dahilan yun kung bakit noong una pa lang wala nang suporta pagkaputok ng impeachment,” Ocson said. (There was demoralization among our ranks, employees who have been in the service for a long time could not move up, and that’s one of the reasons why she has not had support from us since the start of the impeachment.)

Ocson said that Sereno talked to them on October 12, 2017 and they communicated to her their issues. Employees have kept these grievances against Sereno for the entire 5 years that she has been chief justice, he added.

Why this matters. This is the first time that groups who belong to the judiciary, a judges’ association at that, have called for Sereno’s resignation.

This reflects on Sereno’s leadership in her 5 years as Chief Justice.

It prompts questions such as: what did she do, or did not do, that Court employees and judges want her out?

A good place to start would be the impeachment complaint itself, where she is accused of committing transgressions that range from simple misunderstandings to policy lapses.

How will this affect Sereno? Sereno is scheduled to appear at a 10 am press conference at the University of the Philippines (UP). If she doesn’t heed the resignation call, this will add pressure on her and signal to the Senate who will sit as an impeachment court.

Does Sereno have support from judiciary? Some judges and justices have taken to social media to assert their position of judicial independence.

It is a position that’s not explicitly supportive of Sereno, but it supports her stand that she should be subjected to the constitutional process of impeachment.

What happens next? Sereno will continue to fight her battle within the Supreme Court.

Firstly, she has to submit her comment to the quo warranto petition and convince the en banc to drop it so the impeachment process can take its course.

The House of Representatives will have to vote to impeach Sereno and transmit it to the Senate for trial, which is what Sereno wants and what she said she’s looking forward to.

What does this mean for the judiciary? The exposed infighting has greatly affected public trust in the institution.

The National Union of People’s Lawyers (NUPL) said that what is at stake here is the credibility of the justice system, and protecting the branch so that it stays independent and free from political pressure.

“The losing party here is not the Chief Justice nor any Justice of the Court. It is also not the Court or the entire judicial system. It is the residual faith of the people in already unresponsive institutions whose roles are being wilted away, willingly or unwillingly, to de facto authoritarianism,” the NUPL said.

Editor’s Note: In a previous version of this story, we used Jocson as the surname of the SCEA president. This has been corrected to Ocson.