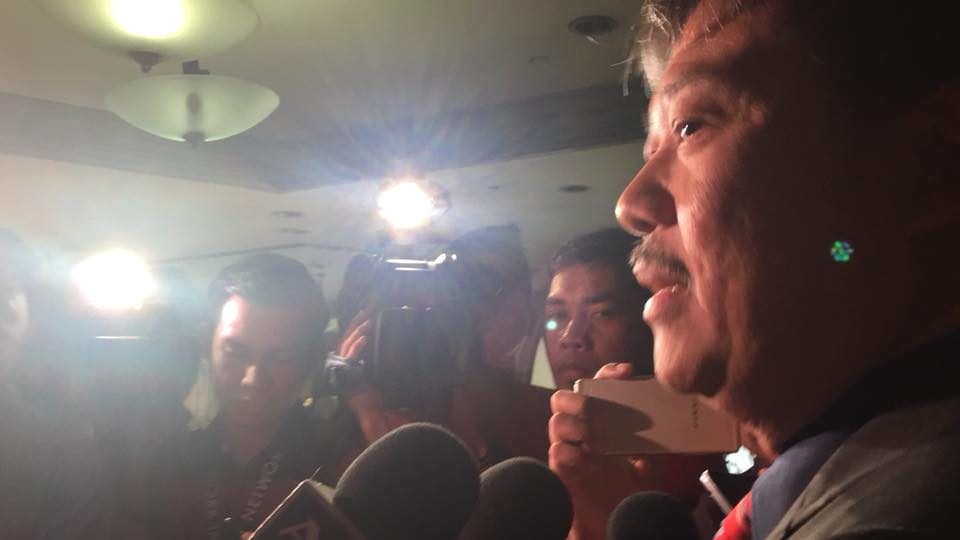 Facebook Twitter Copy URL
Copied
'[It's] because we are in a situation where we don't know what to do.... That's why we have to consult people in authority,' says Janet Lim Napoles' lawyer Stephen David, defending a meeting in Malacañang

Napoles’ lawyer Stephen David admitted to anti-graft court Sandiganbayan during a hearing on Monday, March 19, that he met with Medialdea sometime early March.

“If I were to be candid, there was a discussion with the Executive Secretary that the Department of Justice (DOJ) shall take custody of Mrs Napoles,” David told Presiding Justice Amparo Cabotaje-Tang who questioned why the DOJ did not co-sign the motion to have Napoles transferred to a safehouse.

The lawyer told reporters after the hearing that upon his request, he met with Medialdea and Justice Secretary Vitaliano Aguirre II inside Malacañang to consult them.

With only the DOJ grant of provisional state protection to Napoles, David said he wanted to immediately transfer Napoles to a safehouse and just tell the court later.

“[Medialdea] said to file a motion, that’s why I filed a motion,” the lawyer said.

The lawyer added: “[It’s] because we are in a situation where we don’t know what to do. Is she being immediately taken out of the facility, or shall we file a motion? That’s why we have to consult people in authority as to what to do.” (READ: No need for Janet Napoles: Cases vs LP lawmakers pending at Ombudsman)

Earlier in the morning, David said he had never discussed the issue with President Rodrigo Duterte, who he is reportedly close to.

David, Medialdea, Aguirre, and Duterte are all San Beda lawyers.

When Solicitor General Jose Calida recommended Napoles’ acquittal in the illegal detention case at the Court of Appeals (CA), there were speculations that David used his clout to make it happen.

“I think that’s exactly what they are: speculations,” then Presidential Spokesperson Ernesto Abella said at the time.

David has been seen attending Malacañang events. His wife Lanee, who was once a lawyer for Napoles’ daughter Jeane, was appointed by Duterte as deputy commissioner of the Bureau of Internal Revenue (BIR). – Rappler.com