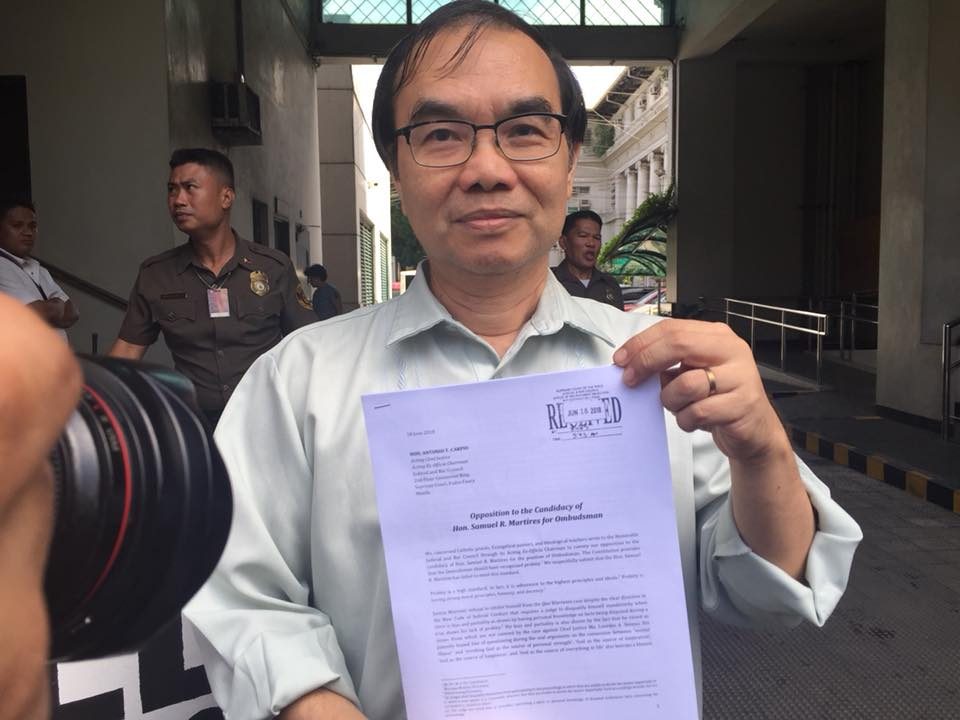 MANILA, Philippines – A religious group filed on Monday, June 18, an opposition to the application of Supreme Court (SC) Justice Samuel Martires as Ombudsman.

Catholic priests, Evangelical pastors and theological teachers sent a letter to the Judicial and Bar Council (JBC) on Monday, saying that Martires “has failed to meet” the standard of probity.

Probity is having strong moral principles, honesty and decency. (READ: LIST: Get to know the Ombudsman applicants)

For the groups, Martires demonstrated a lack of probity when he showed alleged bias against ousted chief justice Maria Lourdes Sereno, and when the justice supposedly made “generalizations” on Sereno’s mental health on basis of her Christian religion.

Martires was among the 8 justices who voted to oust Sereno, and one of the 6 that Sereno wanted to inhibit from voting because of alleged bias.

Sereno said Martires “faith-shamed” her during the oral arguments.

Martires refused to inhibit. “This is patent abuse of power and authority, which this Honorable Judicial and Bar Council can address and rectify as an independent Constitutional body,” the letter said.

In 2013, the Supreme Court “admonished and sternly warned” Martires and his fellow justices at the anti-graft court Sandiganbayan over the delay in executing the final sentence against an Ilocos Norte mayor, Pacifico Velasco.

“The high standard of probity is certainly not met when the candidate for Ombudsman is someone who has been admonished for misconduct and found administratively liable by the Supreme Court,” the letter said,

It is inaccurate, however, to say Martires was found administratively liable. A warning does not constitute administrative liability.

The letter also rehashed the issue that Martires penned the 2013 Sanduganbayan resolution that upheld the controversial plea bargain agreement between the Office of the Ombudsman and former military comptroller Major General Carlos Garcia.

This issue did not halt Martires’ appointment to the Supreme Court in 2017.

The letter also pointed out that it was Martires who penned the 2012 Sandiganbaytan decision which cleared the late President Ferdinand Marcos Sr and the late Armed Forces chief Fabian Ver of a P50 billion damage suit over the alleged Binondo Central Bank scam.

“Both the Philippine Commission on Good Government and the Office of the Solicitor General questioned Martires’ ruling, saying his decision was ‘not an honest and good faith attempt to resolve the instant case in a principled way.’ The fact that two agencies of government questioned his Resolution highlights his lack of probity,” the letter said.

Martires and 8 other applicants for Ombudsman will undergo the JBC public interviews on Wednesday, June 20.

Labor Secretary Silvestre Bello III will also be interviewed, but questions hound his application because he has pending cases at the Ombudsman  which, if going strictly by the JBC rules, should disqualify him automatically.