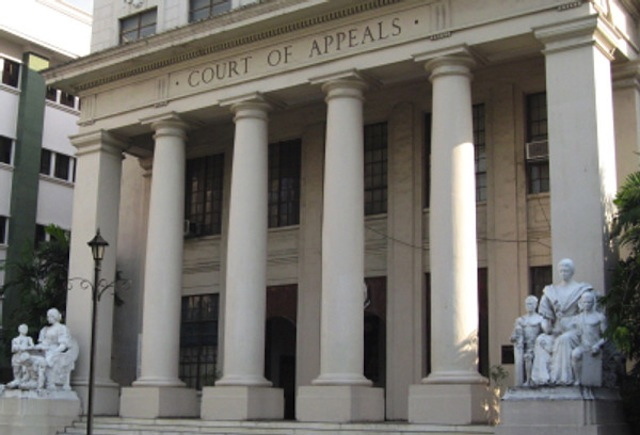 MANILA, Philippines –  The Court of Appeals (CA) has upheld the dismissal from the service of two former Department of Social Welfare and Development (DSWD) officials for their involvement in the “illegal” release and utilization of the pork barrel funds of a Quezon City congressman in 2009.

In its ruling, the CA’s Special Fifth Division found appellants Mateo Montaño and Pacita Sarino guilty of gross neglect of duty and conduct prejudicial to the best interest of the service in connection with the disbursement of the Priority Development Assistance Fund (PDAF) of Quezon City First District Representative Vincent “Bingbong” Crisologo in 2009.

“Accordingly, they are dismissed from government service with all the accessory penalties of cancellation of eligibility, forfeiture of leave credits and retirement benefits, and disqualification for re-employment in the government service,” the CA ruled.

The CA ruling modified the decision of the Office of the Ombudsman on June 19, 2017, which found the two guilty of grave misconduct, serious dishonesty, and conduct prejudicial to the best interest of the service.

The court said this was because it did not find that they benefitted from their “irresponsible” acts. At the time of the transaction, Montano was DSWD undersecretary for the General Administration and Support Services Group while Sarino was assistant bureau director of the DSWD’s Protective Services Bureau.

The CA thumbed down the petitioners’ claim that the release of the P10-million PDAF to nongovernmental organization (NGO) Kalookan Assistance Council Incorporated (KACI) was compliant with DSWD’s internal rules, and that the project submitted by KACI received favorable reviews from the concerned DSWD offices.

The court said that there were 3 DSWD officials who gave unfavorable reviews.

The court said the approval of the fund disbursement to KACI violated Section 75 of the General Appropriations Act, which declared that t is the government’s policy not to allow NGOs to participate in the implementation of any national or local programs or projects if they have unliquidated cash advances in connection with other government projects.

The CA said that in the case of KACI, it had existing unliquidated cash advances when it proposed the projects and was therefore “not qualified for fund transfer.”

“Despite this fact, petitioners, approved the disbursement of funds in favor of KACI,” the court said.

It added that the two DSWD officials failed to show proof that KACI underwent the procedure for availment, release, and utilization of funds under Commission on Audit Circular No. 2007-001. The NGO only submitted project proposals which were immediately approved by Crisologo and others. Montano signed as witness to the Memorandum of Agreement (MOA).

“In the case at bar, there is no showing that KACI underwent the above procedure. There was no bidding or any other selection process conducted,” the court said.

“The acts of petitioners were in clear violation of the rules and regulations of the COA and the General Appropriations Act. Moreover, a simple review of the documents presented by KACI…would have revealed the irregularities found by PACPO (Public Assistance and Corruption Prevention Office). Hence, their actions are tantamount to gross neglect of duty,” it added.

Crisologo was charged for graft and malversation. – Rappler.com