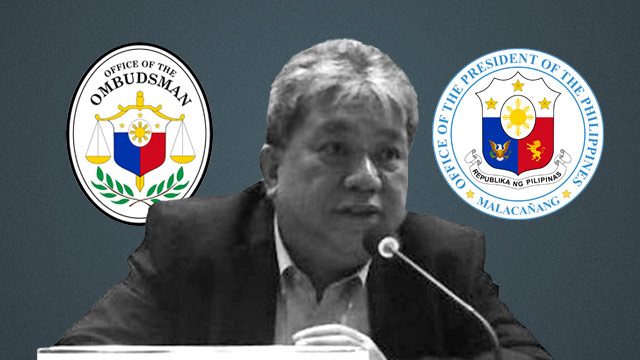 Acting on the complaint of the Volunteers Against Crime and Corruption (VACC), the OP found Carandang guilty of graft and corruption and of violating the government code of ethics.

“These transgressions of respondent Carandang constitute Graft and Corruption as well as Betrayal of Public Trust, which gravely affect his fitness to remain in public office,” the OP said in its order.

The OP order said Carandang is guilty of “grave misconduct” for  for violating Republic Act No 3019 or the Anti-Graft and Corrupt Practices Act, and Republic Act No 6713 or the Code of Conduct and Ethical Standards for Public Officials and Employees.

In a statement, Presidential Spokespersn Harry Roque said, “The decision was reached after giving Mr Carandang the appropriate opportunity to respond to the charges made against him.”

The OP said Carandang showed partiality when he spoke in public about Duterte’s bank transaction documents from the Anti-Money Laundering Council (AMLC) but did not speak about the termination of the Ombudsman’s investigation into the President’s wealth.

Malacañang said this supported the claim of pro-administration lawyers that Carandang violated RA 3019.

Section 3 of the law lists the following as a prohibited act: “Causing any undue injury to any party, including the Government, or giving any private party any unwarranted benefits, advantage or preference in the discharge of his official administrative or judicial functions through manifest partiality, evident bad faith or gross inexcusable negligence.”

The OP said Carandang breached the government code of ethics for supposedly disclosing “confidential information” to “give undue advantage” to Senator Antonio Trillanes IV, who had filed a plunder complaint  against Duterte.

It cited Section 7 of RA 6713  which states that public officials “shall not use or divulge, confidential or classified information officially known to them by reason of their office and not made available to the public, either to further their private interests, or give undue advantage to anyone; or to prejudice the public interest.”

The OP said Carandang’s dismissal would mean his disqualification from holding public office and forfeiture of retirement benefits.

The OP, meanwhile, dismissed the VACC lawyers’ complaint against Deputy Ombudsman Deputy Ombudsman for Mindanao Rodolfo Elman and members of the Ombudsman Fact-Finding Investigation Team in Mindanao for “lack of substantial evidence.”

The pressing question now is: Will Ombudsman Samuel Martires enforce it?

Asked about the OP order, Martires rold reporters, “I have yet to assume office and I have yet to read the decision.”

Carandang was suspended for alleged breach of confidentiality in statements he made  about the bank investigation into the wealth of President Rodrigo Duterte and his family. The investigation was terminated by another deputy ombudsman because the Anti Money Laundering Council (AMLC) did not cooperate.

Before Morales retired, she subjected Carandang to an internal investigation so the office can decide for itself whether Carandang had any liabilities.

Carandang is serving a 7-year term that expires in 2020.

As Morales defied the suspension order, Carandang continued to serve without Malacañang openly objecting to it.

Should Martires decide to enforce the Palace order, there may be a looming legal showdown: Carandang can challenge the implementation of the order and assert that it violated the SC ruling.

There is also a possibility, however, that  if Carandang questions the enforcement of the order before the High Court, the latter would reverse the decision in favor of Malacañang. In the first place, the ruling was decided by a slim 8-7 vote.

The SC ruling was meant to preserve the independence of the Office of the Ombudsman, to shield it from unnecessary pressure from the highest office.

“Subjecting the Deputy Ombudsman to discipline and removal by the President, whose own alter egos and officials in the Executive Department are subject to the Ombudsman’s disciplinary authority, cannot but seriously place at risk the independence of the Office of the Ombudsman itself,” the SC decision said.

Malacañang’s lawyers, as well as Solicitor General Jose Calida, have always said that they are confident of securing a reversal of that ruling.

But former solicitor general Florin Hilbay, a constitutional law professor, earlier said that an attitude of  “violate-the-law-now, seek-reversal-later” is not legal.

“That attitude is incompatible with his constitutional obligation to enforce the law: it is the antithesis of the rule of law,” Hilbay said in an earlier statement.  (READ: Carandang case: Impeachment for Morales or Duterte?)