Aug 16, 2018 11:14 AM PHT
Lian Buan
Facebook Twitter Copy URL
Copied
Justice Bersamin says he and his wife would be willing to sign a waiver if necessary 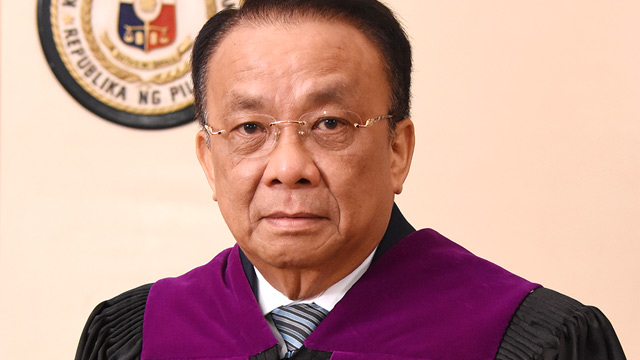 MANILA, Philippines – Supreme Court (SC) Associate Justice Lucas Bersamin had to defend the increase in his wealth when he faced the Judicial and Bar Council (JBC) on Thursday, August 16, during the public interviews of chief justice aspirants.

According to his 2016 Statements of Assets, Liabilities, and Net Worth (SALN), Bersamin’s net worth is P41.29 million. The SC releases only summaries of the justices’ wealth, but not the SALN itself. The SC has not released the justices’ 2017 SALNs.

In 2017, Bersamin was the 3rd highest paid SC justice, with salaries and allowances worth P6.81 million, based on the annual Reports on Salaries and Allowances (ROSA).

JBC member Milagros Fernan Cayosa asked Bersamin about what she described as a “remarkable increase of assets.”

According to Cayosa, these are the increases in Bersamin’s assets:

Bersamin said the increases are largely due to his allowances from being member of electoral tribunals.

“When you get to be a member of the SET or the HRET, you are given an allowance that is very substantial also, we do not know if that is taxable or not, that impacts on our financial standing,” Bersamin said. (READ: #CJSearch: How did aspirants vote on key Supreme Court decisions?)

Bersamin said some of the increases reflected the substantial bank deposits of his wife, who is in the private sector. Bersamin’s wife Aurora is involved in selling and importing “high end” film-making equipment.

Bersamin said his wife “sporadically” deals with the government.

“She is a member of the Philgeps (Philippine Government Electronic Procurement System) but she does not sell in the SC because I told her not to offer anything in the judiciary,” Bersamin said.

Bersamin added that the jumps can also be attributed to a condominium unit that they had just finished paying. (READ: The ties between Lucas Bersamin and Estelito Mendoza)

Cayosa asked Bersamin if the justice declared his liabilities from the time when he started paying the condominium unit on installment. But Bersamin said he only declared the condo when he completed payments.

“I reported only when we completed the payment, when you still pay for installment, it’s not yet time for you to declare, maybe I was wrong but that is how I did it, the compliance committee of the SC has not called my attention to it if it was a mistake,” said Bersamin.

Cayosa asked if Bersamin and his wife would allow further inquiry into their wealth.

“Should there be a need for the council to look further into your and your wife’s assets, would your wife be willing to sign a waiver as well?” Cayosa asked.

“As far as that goes your honor, I think so,” Bersamin said.

Bersamin is the 3rd most senior in the 5 Chief Justice applicants. He will retire in October 2019. – Rappler.com