Aug 16, 2018 9:43 PM PHT
Lian Buan
Facebook Twitter Copy URL
Copied
(UPDATED) 'I have a background in managing in the Court of Appeals, being its presiding justice for the last 7 or 8 years,' says Justice Andres Reyes Jr 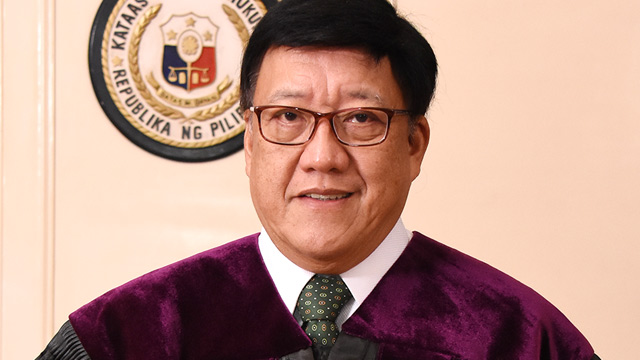 MANILA, Philippines (UPDATED) – Supreme Court (SC) Associate Justice Andres Reyes Jr said his long career in the judiciary is a good qualification for him to be the next chief justice, despite his being the second most junior member of the Court.

Reyes was a metropolitan trial court (MTC) judge, regional trial court (RTC) judge, Court of Appeals (CA) associate justice, and then its presiding justice, before he was appointed to the SC in July 2017.

“I would know all the 4 levels of the court… All the applicants are fit and all are qualified,” Reyes said.

After the ouster of Maria Lourdes Sereno as chief justice, there were expectations that the tradition of seniority would be honored in choosing her replacement. Sereno’s rise from junior justice to Chief Justice in 2012 ruffled some feathers in the SC that left permanent fissures on both professional and personal relationships among justices.

There was also a consensus in the en banc “that the next Chief Justice should come from the 5 most senior incumbent justices,” according to the letter of Associate Justice Marvic Leonen when he declined his nomination for Chief Justice.

“It is a rational policy based on past experience,” Leonen said.

“I think if given the chance, I just want to work and dedicate my life to the idea that justice can be served. I’m just offering my services to the country, I will work very hard just like I did as a presiding justice. Even now as an associate justice, I go to work early, and leave at 5 pm,” Reyes said.

Reyes, who is 68 years old, will retire in May 2020. Reyes said he has finished around 900 cases after only one year at the SC.

Reyes, who has so far been consistently voting in favor of cases that are of interest to President Rodrigo Duterte, was asked on judicial independence.

“There must be courage on the part of the Supreme Court, it must be able to swallow its weaknesses, and move on in spite of all the possible fallout it would get if it decides against a person or political party,” Reyes said.

Reyes kept citing his work as head of the CA to prove his management skills – a supposed point of weakness in the Sereno court.

His answer indicates the willingness to compromise,  prompting Senator Richard Gordon to say: “I don’t think you’re talking about right, maybe expediency, that there’s a time and a place. But right never changes, even in the face of might.”

Reyes also said he does not agree that the SC should step into the business of Congress, such as which group should constitute the minority at the House of Representatives.

“I think we should not look into the acts of Congress, we should restrain ourselves and not interfere in their process,” Reyes said.

This is curious because as CA presiding justice, Reyes released a joint statement with Sereno that stood by the appellate court’s decision ordering the release of Ilocos Norte officials who were detained at the lower chamber for contempt.

Reyes did not directly answer a question on whether it was correct for Duterte to say that if he resigns, Vice President Leni Robredo should not become president, contrary to rules on succession.

“We have to make it aware to everybody that the SC is the bastion of democracy, and the SC will follow what is dictated in the Constitution,” Reyes said.

Reyes would give more statements that indicate his willingness to be hands off on the acts of the two other branches of government.

“Sometimes, you allow the wisdom of the law to first be implemented before you sound it off and declare it as unconstitutional. Sometimes you defer to legislative intent,” he said. – Rappler.com