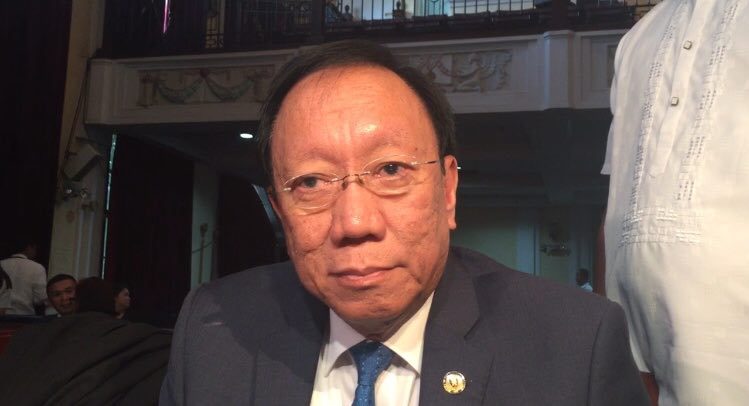 MANILA, Philippines – Solicitor General Jose Calida was evasive on Tuesday, September 4, when asked about his role in the voiding of the amnesty granted to opposition senator Antonio Trillanes IV, which has the effect of immediate arrest.

Earlier on Tuesday, Justice Secretary Menardo Guevarra said “it might have been” the Office of the Solicitor General (OSG) that reviewed Trillanes’ amnesty, though he said he wasn’t sure about the specifics, like when it began.

“I am not sure who exactly conducted the review, but I suppose this might have been studied by the Office of the Solicitor General,” said Guevarra, who is also the country’s officer-in-charge while President Rodrigo Duterte is in Israel.

But Calida dodged the questions, saying, “We have such a thing as a privileged communication between lawyer and the client.”

“I don’t know about him. He’s not a judge, he’s not a prosecutor, so if he wants to file cases, let him file a case,” said Calida.

Trillanes was the one who pushed for a Senate inquiry into the alleged impropriety of the government contracts worth at least P261.39 million won by Calida’s family-owned security firm Vigilant. Trillanes led a hearing on it also on Tuesday.

“It’s sub judice, it’s before the courts. If he wants to he can join us here, we will debate here,” the solicitor general said.

It is uncharacteristic of Calida to be mum about the affairs of the OSG. In filing the quo warranto petition against ousted chief justice Maria Lourdes Sereno, the solicitor general announced it in a press conference and even invited media to cover the filing.

“We are not as combative as before,” Calida said.

Asked why, Calida said: “As you grow older, you grow wiser. We learn by experience.”

Duterte voided Trillanes’ amnesty, citing as grounds non-fulfillment of requirements such as an official application and an express admission of guilt in the charges he faced for the Oakwood mutiny and the Manila Peninsula standoff.

Guevarra, who said he was only notified of the proclamation on September 2 when Duterte flew to Israel, said it is not a revocation but a nullification “void ab initio,” meaning it was never valid from the start.

Both Calida and Guevarra said this is the first time in recent history that this was done.

It follows Sereno’s quo warranto ouster, and the Philippines’ withdrawal from the International Criminal Court, which are also cases of first impression.

“But that’s the law. Quo warranto is in the rules of court, we’re not inventing anything. The wheel was already invented, we don’t have to reinvent it,” Calida said.

Calida said he is “ready” to face Trillanes should the senator elevate the case to the Supreme Court. – Rappler.com