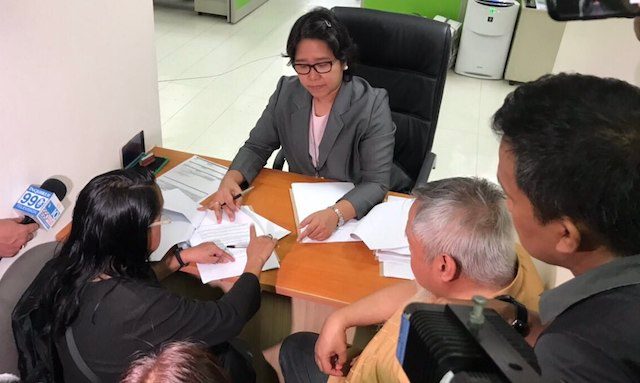 Facebook Twitter Copy URL
Copied
'This will be an example for others,' says Carol Dagani, president of the Philippine Federation of the Deaf

MANILA, Philippines – The Philippine Federation of the Deaf (PFD) on Thursday, September 20, filed a complaint against Communications Assistant Secretary Mocha Uson and blogger Drew Olivar for violating the Magna Carta for Disabled Persons over a video mocking the sign language.

The group, which filed the complaint before the Office of the Ombudsman, cited in its complaint  Section 41 of Republic Act 9442 or the Magna Carta for Disabled Persons which prohibits the public ridicule and vilification of persons with disabilities.

“No individual, group or community shall execute any of these acts of ridicule against persons with disability in any time and place which could intimidate or result in loss of self-esteem of the latter,” says the law.

The PFD did not immediately release a copy of its complaint, but its leaders said they also cited Republic Act 6713 or the Code of Conduct and Ethical Standards for Public Officials and Employees, and the Anti-Cybercrime law.

Uson posted a video on Facebook of OIivar mimicking sign language and making sounds as if imitating the deaf, while the Malacañang official could be heard laughing in the background.

The two have offered their apologies but the deaf community wants them punished for their offensive actions. (READ: Nancy Binay to Mocha Uson: It’s a crime to make fun of PWDs)

“No we don’t accept. There are so many deaf people that we have asked and I’d like to tell you that they don’t accept [the] apology,” said Carolyn Dagani, president of the PFD.

Public ridicule of disabled persons is punishable by fine and jail time under R.A 9442, while complaints for violation of the Code of Conduct have the penalty of suspension or dismissal from the service.

Dagani added: “We would like to see penalties applied if this is prudent. They can learn their lesson and this will be an example for others. It’s easy for them to apologize and change their minds. But this will really set a bad example if it is not penalized.”

The PFD has filed a similar complaint before the Commission on Human Rights (CHR), but the agency has no prosecutorial powers.

Uson has already been sued twice before the Ombudsman – for violation of RA 6713  for spreading fake news, and for the criminal charge of libel filed against her by Senator Antonio Trillanes IV.

There is no update yet on these complaints, as Ombudsman Samuel Martires has pledged that the office will no longer announce updates and even resolutions to avoid trial by publicity.

Uson and Olivar are only coming off a previous controversy over a lewd federalism jingle and dance, which caught the ire of lawmakers, allies of President Rodrigo Duterte, and even officials from Uson’s own Presidential Communications Operations Office.– Rappler.com