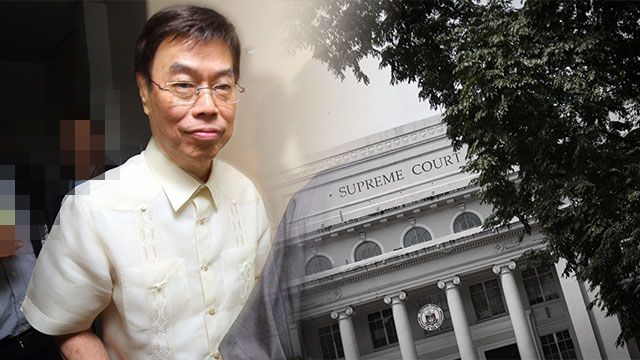 MANILA, Philippines – The Supreme Court denied fugitive Peter Lim’s request to nullify the Department of Justice (DOJ) reinvestigation against him, and in effect, allowed the drug charges to continue against him at the Makati Regional Trial Court (RTC).

“The Court resolves to dismiss the petition for failure to show any grave abuse of discretion in rendering the challenged order and resolution, which, on the contrary, appear to be in accord with the facts and the applicable law and jurisprudence,” said a notice from the Supreme Court received by parties on September 24, but dated July 23.

Lim went to the Supreme Court to try and stop the then-ongoing DOJ reinvestigation against him, saying it violated his right to due process.

Lim was earlier cleared by a DOJ panel, but public outcry prompted former justice secretary Vitaliano Aguirre II to void that decision and assemble a new and second panel to investigate the businessman.

The DOJ’s new panel charged Lim in August with two counts of conspiracy to commit illegal drug trading for allegedly supplying shabu to the Visayas drug network of Kerwin Espinosa.

The SC’s dismissal of Lim’s petition means that there is no legal impediment to the DOJ’s charges.

The Makati RTC ordered the arrest of Lim on August 14, but the influential businessman has not been caught to this day.

The Makati court has since issued a Hold Departure Order against Lim, with the Bureau of Immigration saying that at least based on its records, Lim appears to still be in the country. – Rappler.com