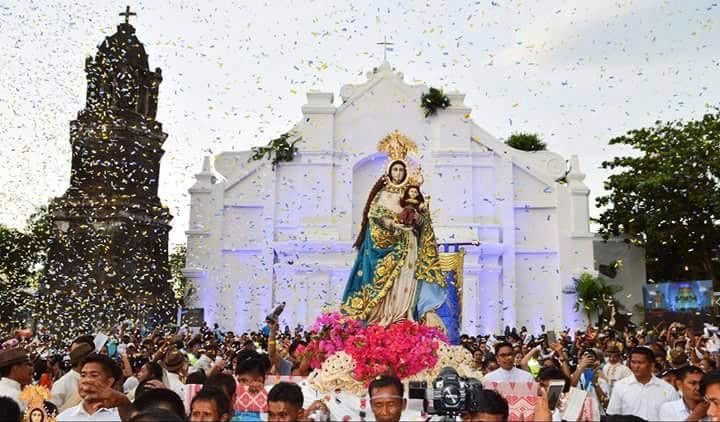 Facebook Twitter Copy URL
Copied
(UPDATED) The Laoag diocese announces that the declaration rite of the centuries old church into a minor basilica will be on February 5, 2019

In a mass at the St. John the Baptist Parish in Badoc town in time for the feast of St. John the Apostle and Laoag Bishop Renato Mayugba’s 13th Episcopal Ordination anniversary, the prelate said that the diocese scheduled the declaration on February 5, 2019 at 9 am.

The Apostolic Nuncio to the Philippines, Archbishop Gabriele Giordano Caccia is expected to read the Decree of Concession on behalf of Pope Francis while Cotabato Archbishop Emeritus Orlando Cardinal Quevedo who is a native of Ilocos Norte will preside over the mass.

In a letter dated November 30, 2018, the Holy See’s Congregation for Divine Worship and the Discipline of the Sacraments approved the application of the Diocese of Laoag to elevate the status of the centuries-old church which housed the antique and miraculous image of La Virgen Milagrosa de Badoc since 1620. (READ: Vatican elevates 2 Philippine shrines to minor basilicas)

The application came months after the pontifical coronation of the Marian image on May 31.

Built in the 17th Century by Fray Antonio Estavillo, OSA, the same person who built the world-heritage Paoay church, the Badoc shrine is among the 11 Fil-Hispanic Baroque churches in Ilocos Norte. (READ: 9 things to do in Ilocos Norte)

It was made into a parish church in 1714, when it was separated from Sinait town’s St. Nicholas of Tolentine Parish.

The title minor basilica which also entails the eligibility to some ecclesiastical privileges because of its “special bond of communion with the Pope” is granted to a church that meets certain criteria such as antiquity, dignity, historical value, architectural and artistic worth, and significance as centers of worship.

Aside from the Badoc church, the National Shrine of Our Lady of Mount Carmel in New Manila, Quezon City was also granted the status of minor basilica.

With the elevation, local priests and officials expect an increase in number of pilgrims who will be visiting the church.

In 2020, the diocese will celebrate the 400th anniversary of the arrival of the Marian image of the Ilocanos. – with reports from Fr. Ericson Josue / Rappler.com