Mar 7, 2019 11:56 AM PHT
Lian Buan
Facebook Twitter Copy URL
Copied
‘It would be a complete travesty of justice should the Honorable Court sanction the arbitrary and wrongful exclusion from the Information of those who had actual participation in the illegal drug trade,’ says De Lima 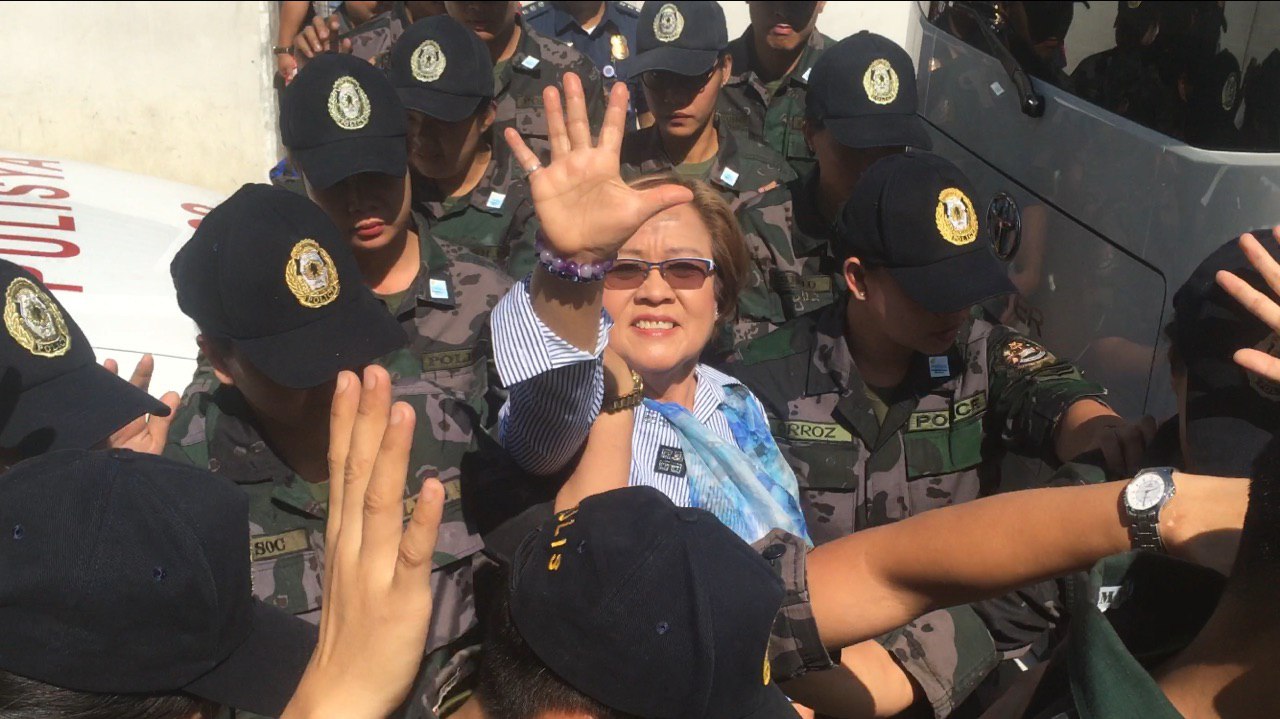 De Lima filed on March 1 a motion to include 13 convicts in her drug charge pending before Muntinlupa Regional Trial Court (RTC) Branch 256.

This motion can be seen as another route to disqualify the convicts as witnesses for the Department of Justice (DOJ). De Lima has elevated this issue to the Court of Appeals.

As in past pleadings, De Lima argued that the convicts, which include the infamous singer Herbert Colanggo, had already admitted to trading drugs inside the New Bilibid Prison (NBP).

The DOJ dropped the convicts from the indictment  to use them as witnesses. The DOJ only charged Jaybee Sebastian, who has already pleaded guilty.

“Considering the major roles of the witnesses in the alleged drug trading in the Bilibid, the Court, in the spirit of its judicial independence cannot just fold its arms and close its eyes to the Prosecution’s manifest disregard of our Constitution, laws, and rules,” said De Lima.

One of the convicts, Engelbert Durano, was supposed to take the witness stand on Wednesday, March 6, inside the NBP court but the DOJ wanted to instead present Reynante Diaz, Colanggo’s supposed “manager” inside the jail.

“Ang dinala nilang witness iba. So nagreklamo kami dahil naghanda kami para sa depensa ng aming mga kliyente na para sana kay Durano (They brought a different witness. So we complained that we are not prepared because the defense we have for our client is supposedly for Durano),” said De Lima’s lawyer Boni Tacardon.

Diaz had admitted to the DOJ that he would deliver “P3 million monthly to De Lima through Sanchez who would deliver it to Ronnie Dayan while waiting inside a Starex van parked at the Sunken Garden outside the NBP.”

Durano had also admitted to being asked to raise P1.5 million and “give the money only to De Lima.” He claimed to have personally delivered to De Lima a box containing P1.5 million.

“It would be a complete travesty of justice should the Honorable Court sanction the arbitrary and wrongful exclusion from the Information of those who had actual participation in the illegal drug trade,” De Lima said.

De Lima had repeatedly argued that people convicted of crimes involving moral turpitude should not be used as state witnesses according to the Witness Protection Program (WPP) law.

Technicality, however, protects the DOJ in this aspect because Rule 119 of the Rules of Court defines a state witness as someone who was charged with the commission of any offense. The DOJ never charged the convicts.

Whenever the DOJ is asked if they have witnesses apart from the convicts who could directly link De Lima to the drug trade, the handling prosecutors would always say to just watch out for new developments. – Rappler.com