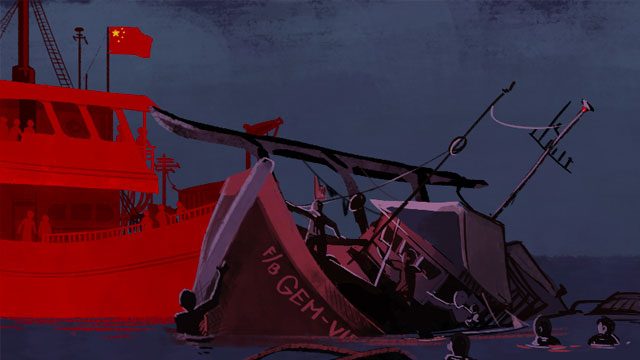 MANILA, Philippines – In what seems to be a “hit-and-run” incident at sea, a ship rammed a Philippine fishing vessel anchored near Recto Bank in the West Philippine Sea (South China Sea) on Sunday, June 9.

The Philippine military made the information public on Wednesday, June 12, as the country commemorated Independence Day.

Subsequent testimonies of the fishermen make it clear that while most were asleep, they were awakened by the crew’s cook, Richard Blaza, seconds before the impact. The captain tried to maneuver the boat away from the path of the approaching vessel. *Editor’s note: Captions have been added to the video to reflect these details.

The larger vessel, which fishermen identified to be Chinese, left 22 Filipino fishing crew “to the mercy of the elements,” the military said, until a Vietnamese vessel came along after 6 hours and rescued them.

Experts say the incident is a first in the dispute between the Philippines and China. The Philippine military said the sinking was “far from accidental.”

By June 13 evening, however, Philippine authorities said they weren’t certain it was a Chinese vessel involved in the incident. China also said it was still investigating. – Rappler.com