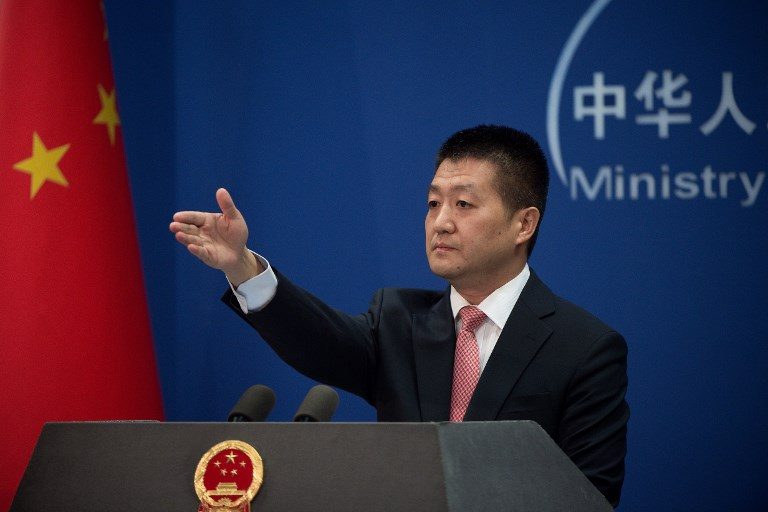 Facebook Twitter Copy URL
Copied
For the first time since the Recto Bank issue erupted, China also sends its sympathies to the 22 Filipino fishermen of the boat sunk by a Chinese ship

MANILA, Philippines – China omitted its account of a Chinese ship allegedly “besieged by 7 or 8 Filipino fishing boats” as it released a new statement on Tuesday, June 18, about the sinking of a Filipino boat in Recto Bank (Reed Bank).

For the first time since the Recto Bank issue erupted, China also sent its sympathies to the 22 distressed fishermen of Filipino vessel F/B Gem-Ver. It took China nearly a week since the incident was exposed on Philippine Independence Day, June 12, before it issued these words of sympathy through an email from the Chinese embassy.

The Chinese embassy in Manila emailed this new statement to reporters on Tuesday morning, June 18. The statement came in the form of a transcript of the press conference of Chinese Foreign Ministry Spokesperson Lu Kang in Beijing on Monday, June 17.

“On the early morning of June 10, an accidental collision took place between a Chinese fishing vessel and Filipino fishing vessels near the Liyue Tan. We express our sympathy to the Filipino fishermen who were in distress,” Lu said.

Liyue Tan is the Chinese name for Recto Bank, a potentially oil-rich area in the West Philippine Sea (South China Sea) that is claimed by China, but is owned by the Philippines based on a 2016 international ruling.

Lu stressed that the Recto Bank incident “is only an accidental collision between fishing boats at sea.”

China in its statement did not give further details about this “accidental collision.”

Neither did it protest or voice concern about the alleged “besieging” of a Chinese ship by Filipino boats – another indication that it has omitted this story. It is customary for countries to issue diplomatic protests or at least statements of concern if even one of its nationals experiences harassment at the hands of foreign nationals abroad, much more in a volatile region like the West Philippine Sea.

The Chinese embassy had denied on Friday, June 14, that a Chinese ship sank a Filipino boat in a “hit-and-run” incident in the West Philippine Sea. It said the Chinese ship was in fact “besieged by 7 or 8 Filipino fishing boats,” preventing it from rescuing the Filipino fishermen from their sunken boat.

The Chinese embassy first posted this statement on Facebook at 9:20 pm on Friday, then took it down hours later. The statement was gone from Facebook overnight, fueling speculations by critics that China was taking the story back. China posted the statement again at 11:44 am on Saturday, June 15.

While the new statement omitted the supposed besieging, it was consistent with China’s previous statements in other aspects. It echoed the statement of another Chinese foreign ministry spokesperson, Geng Shuang, that it was irresponsible for the Philippines to “politicize the incident without verification.”

Lu said on Monday, “It is irresponsible and counter-constructive to link this incident with China-Philippines friendship or even make political interpretations out of it.”

China said it “will continue to earnestly investigate” the matter.

Lu said: “China and the Philippines are neighbors across the sea. Our fishermen have long been friendly to each other, rendering mutual assistance to the best of their capabilities in times of need. China attaches great importance to maritime safety. We will continue to cooperate with littoral countries in this area.”

Lu made this statement on the same day that President Rodrigo Duterte dismissed the Philippine boat sinking as a “maritime incident.” Duterte echoed China’s earlier claim that it was an “ordinary maritime traffic incident.” – Rappler.com