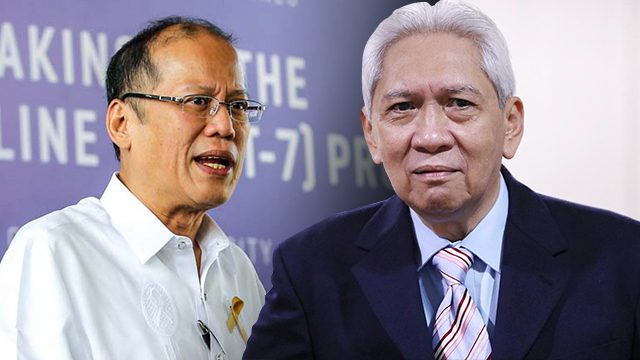 Facebook Twitter Copy URL
Copied
The Ombudsman says the withdrawal is ‘without prejudice to the filing of appropriate charges.’ Solicitor General Jose Calida wants to charge the former president with homicide instead of graft.

In a motion to withdraw information filed before the anti-graft court Sandiganbayan, Martires said that he “finds no sufficient ground and evidence to charge” Aquino of graft and usurpation of official functions.

The two-page motion that Martires himself signed on June 24 does not explain the legal basis of the withdrawal, except for a simple line about Aquino “being then the President of the Republic of the Philippines during the time material to these cases.”

Martires asked the Sandiganbayan 4th Division to withdraw the two cases against Aquino “without prejudice to the filing of appropriate charges against accused after the conduct of preliminary investigation.”

The Supreme Court has halted the Sandiganbayan proceedings on the appeal of Solicitor General Jose Calida to instead charge the former president with 44 counts of homicide. Aquino has not been arraigned over these two charges.

The motion to withdraw will be heard by the anti-graft court’s 4th division on July 12.

Former ombudsman Conchita Carpio Morales junked the complaints for reckless imprudence resulting in homicide and proceeded to file graft and usurpation. He was charged for one count each of graft and usurpation of official functions for allowing dismissed police chief Alan Purisima to participate in Oplan Exodus despite his suspension at the time.

Aquino was served his first warrant of arrest post-presidency over the Mamasapano cases.

He faces another usurpation charge over the Disbursement Acceleration Program (DAP), which the Office of the Ombudsman has yet to officially file with the Sandiganbayan.

It was also under Morales that Aquino was charged over DAP. – Rappler.com