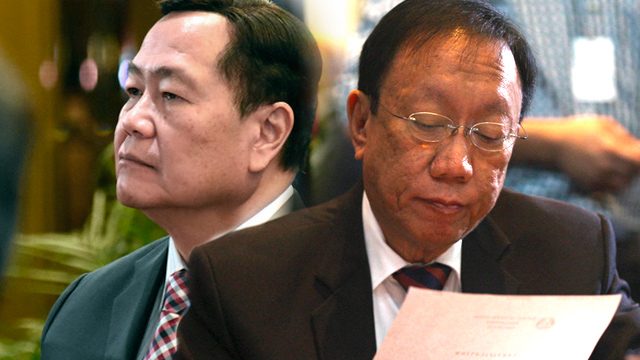 “The grounds for Carpio’s inhibition are his personal bias and manifest partiality, as evidenced by: (1) his active participation in the South China Sea (SCS) Arbitral Proceedings; and (2) his continuing public pronouncements against the actions taken by the government in relation to the SCS Arbitral Award,” the Office of the Solicitor General (OSG) said in a statement on Friday, June 28.

Carpio declined to comment. Calida will represent the Duterte government in the case before the Supreme Court.

The senior justice, who will retire in October, is expected to participate in the oral arguments on the petition on Tuesday, July 2.

The High Court had earlier granted a writ of kalikasan to the petitioners – fishermen of Palawan and Zambales – who complained that the Duterte government is refusing to enforce Republic Act No. 8550 or the Philippine Fisheries Code of 1998 to protect both Philippine maritime and environmental interests in the West Philippine Sea.

The writ had no concrete implications yet except to compel the government to explain itself, not just through pleadings, but in oral arguments where they will be grilled publicly by the SC bench, including Carpio, a leading expert on the topic.

​“In the constitutional order of our government, the President has always been the chief architect of foreign policy. The Supreme Court has recognized this in several cases. A sitting member of the Court cannot supplant the authority of the President to direct our foreign policy,” it added.

The oral arguments will be held amid fresh tensions in the West Philippine Sea after a Chinese vessel sank a Philippine boat with 22 fishermen in Recto Bank, where Philippines enjoys exclusive sovereign rights.

Human rights lawyer Chel Diokno, lawyer for the petitioners, said that Duterte’s soft responses on the incident was again another refusal to implement the fisheries code, which empowers the Philippine government to fine China up to $1 million for just being in Recto Bank.

The arbitral proceedings that Calida referred to is the 2016 Hague ruling that invalidated China’s historical claim of the nine-dash-line – a ruling that Duterte has set aside in light the Philippines “friendship” with China under his watch.

Carpio has not shied from championing the Hague ruling, and has even given several lectures on how to assert sovereign rights without necessarily going to war with a regional giant like China, contrary to what Duterte has insisted. – Rappler.com