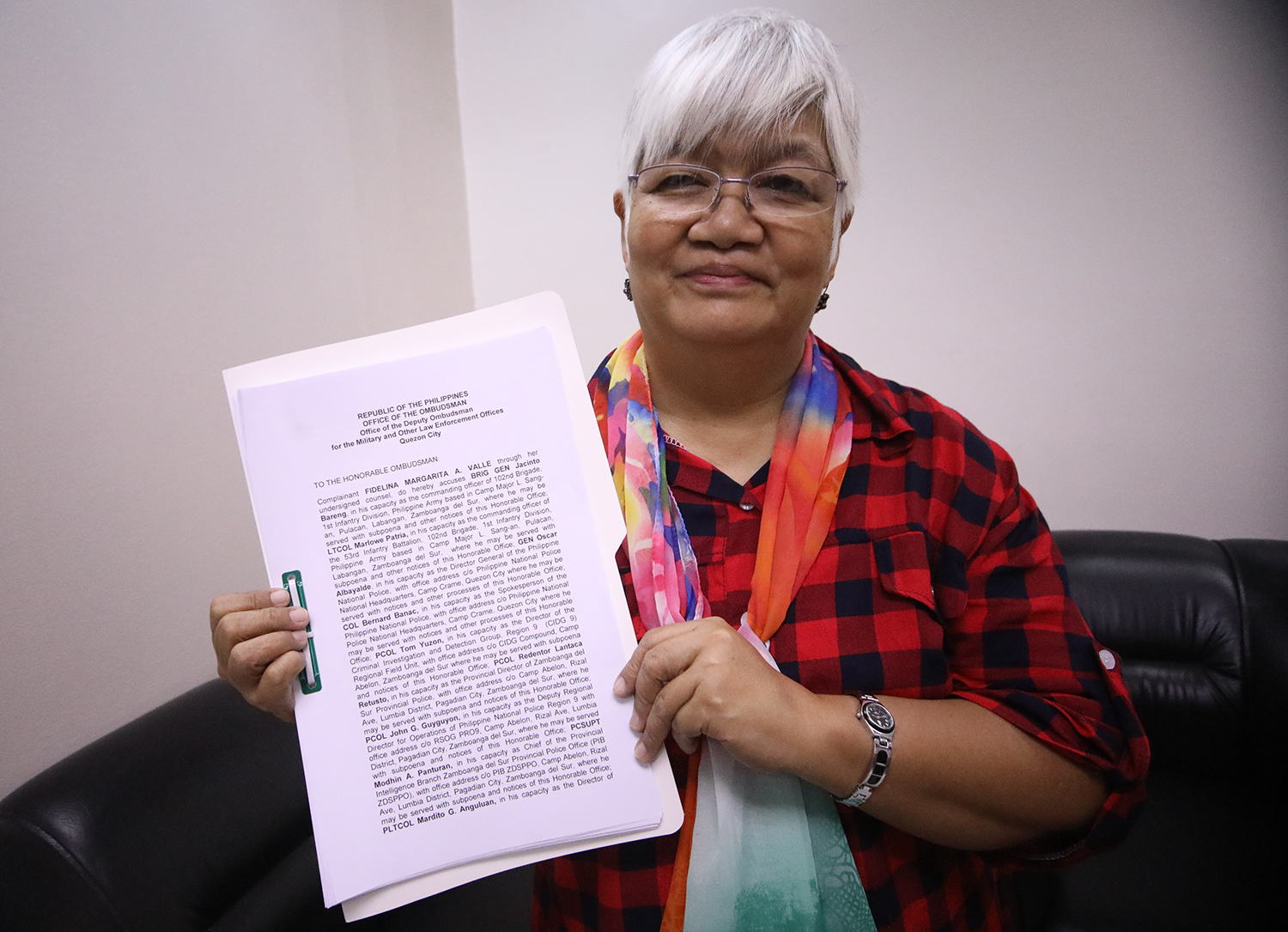 MANILA, Philippines – Journalist Margarita Valle on Thursday, July 4, filed before the Office of the Ombudsman multiple complaints against cops of the Criminal Investigation and Detection Group (CIDG) Region 9 who arrested and detained her in June.

Valle filed complaints of kidnapping, serious illegal detention, torture, violation of rights of arrested persons, and gross misconduct against the CIDG team that arrested her at the Laguindingan Airport in Misamis Oriental on June 9.

Valle said the police and military officers were not part of the arresting team but she wanted them charged for being the “principals by inducement.” Bareng heads the 102nd Infantry Brigade, 1st Infantry Division of the Philippine Army; while Patria heads the 53rd Infantry Battalion.

“Respondent Albayalde is liable since all of these acts committed against me were committed with his knowledge, acquiescence, tolerance, sanction, approval and/or even upon his orders,” Valle said in her 20-page complaint.

“He, along with respondent Banac, had publicly defended and justified his and his officers’ treatment of me as a simple case of ‘mistaken identity.’ Such a lame excuse would not justify the trauma, fear, stress and anxiety I had to endure for more than twelve hours of grueling uncertainty,” she added.

The complaint cited a 2014 Supreme Court decision where the High Court said “it is the inducer who sets into motion the execution of the criminal act.”

Valle was nabbed at the Laguindingan airport on June 9 based on arrest warrants for charges of “multiple murder with quadruple frustrated murder,” destruction of government property, and arson.

The PNP later called Valle’s case an arrest of mistaken identity, after a  witness testified that Valle just had “huge semblance” to the real suspect, identified in the complaint as Elsa Renton.

In her complaint, Valle detailed how she was allowed only one call from the airport before she was whisked away in a vehicle where her cellphones were seized.

Valle was again given the chance to make phone calls upon arrival at a police station in Pagadian, where she was already experiencing difficulty in breathing.

“They offered to take me to the hospital, but I refused because I was afraid that they might bring me elsewhere. I told them that I will only go with people I know and trust,” Valle said.

The complaint was filed before the Military and Other Law Enforcement Officers (MOLEO) section of the Office of the Ombudsman, which has jurisdiction over law enforcement officers.

In such cases, the Office of the Ombudsman has the power to administratively discipline the officers based on an initial finding such as suspension or dismissal. It could also eventually find probable cause to file criminal charges.

Valle and journalist groups have condemned the arrest as proof of the targeting of individuals who the state has linked to communist rebels.

Rights group Karapatan has recorded that in the 3 years of President Rodrigo Duterte’s administration, 2,370 human rights defenders have been charged, more than the total number of those charged in the 6 years of Benigno Noynoy Aquino III (1,817), and in the 9-year presidency of Gloria Macapagal Arroyo (2,059). (READ: Duterte’s war on dissent) – Rappler.com