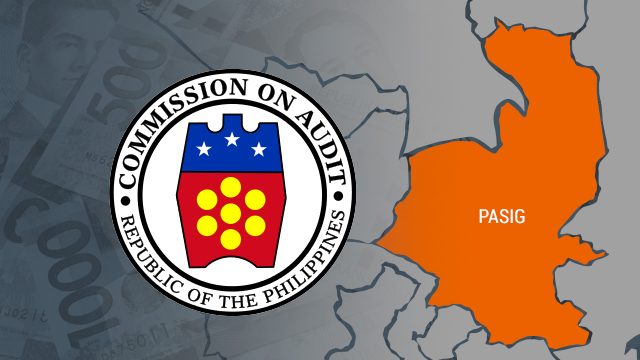 Facebook Twitter Copy URL
Copied
'The excessive procurement of supplies and materials resulted in the slow/non-moving inventory items that may eventually go to waste,' says the Commission on Audit

MANILA, Philippines – The Pasig City government under former mayor Bobby Eusebio procured supplies and materials worth P951.79 million in 2018, but only issued items worth P196.14 million, according to the Commission on Audit (COA).

This means P755.65 million worth of supplies and materials are still in storage – items such as food, relief goods, medicines, fuel and lubricants, textbooks, and office supplies.

“The excessive procurement of supplies and materials resulted in the slow/non-moving inventory items that may eventually go to waste due to obsolescence or other forms of losses contrary to COA Circular No. 2012-003,” COA said in its audit report on Pasig City.

The COA circular defines excessive expenditures as “unreasonable expense or expenses incurred at an immoderate quantity and exorbitant price.”

The report said the procurement of the supplies and materials “in quantities exceeding the normal, three-month requirements” is considered an excessive expenditure.

“It was also noted that subsequent procurement were undertaken despite considerable balances carried over from prior years for the General and Special Education Funds,” state auditors said in the report.

The report recommended that the city government “strictly monitor the balances of inventories and ensure that the procurement of supplies and materials is adequately planned” so that only the necessary items are bought “in appropriate quantities at the right time.”

The city government said it is already in the middle of implementing a comprehensive plan to address its procurement issues.

In addition, COA called out the city government for failing to provide sufficient insurance coverage for properties. Of its total insurable properties of P18.32 billion, only 14.14% or P2.59 billion of insurable assets were protected from potential damage or loss due to fire, earthquake, storm, or other fortuitous events.

The properties to be insured include vessels, motor vehicles, machineries, and buildings and properties stored in them such as furniture and fixtures.

The report reminded Pasig City that Republic Act No. 656 “requires all government agencies…to insure against any insurable risk their properties, assets, and interests with the General Insurance Fund, as administered by the Government Service Insurance System.”

But according to state auditors, there were lapses in documentation even for insured properties.

“In any contingency, the city may not be able to collect the insurance proceeds…due to the absence of proper identification,” COA said.

Still, COA commended Pasig City for exceeding its overall revenue projections for 2018 by 20.51%, equivalent to P1.69 billion. Its projected income was P8.22 billion, while its actual income was P9.91 billion.

The biggest increments were recorded in business taxes, which exceeded the 2018 target by P1.42 billion, followed by permit fees by P240.08 million. A total of 17 accounts, however, missed the 2018 projections, including basic real property tax (by P351.62 million) and hospital fees (by P151.72 million). – Rappler.com