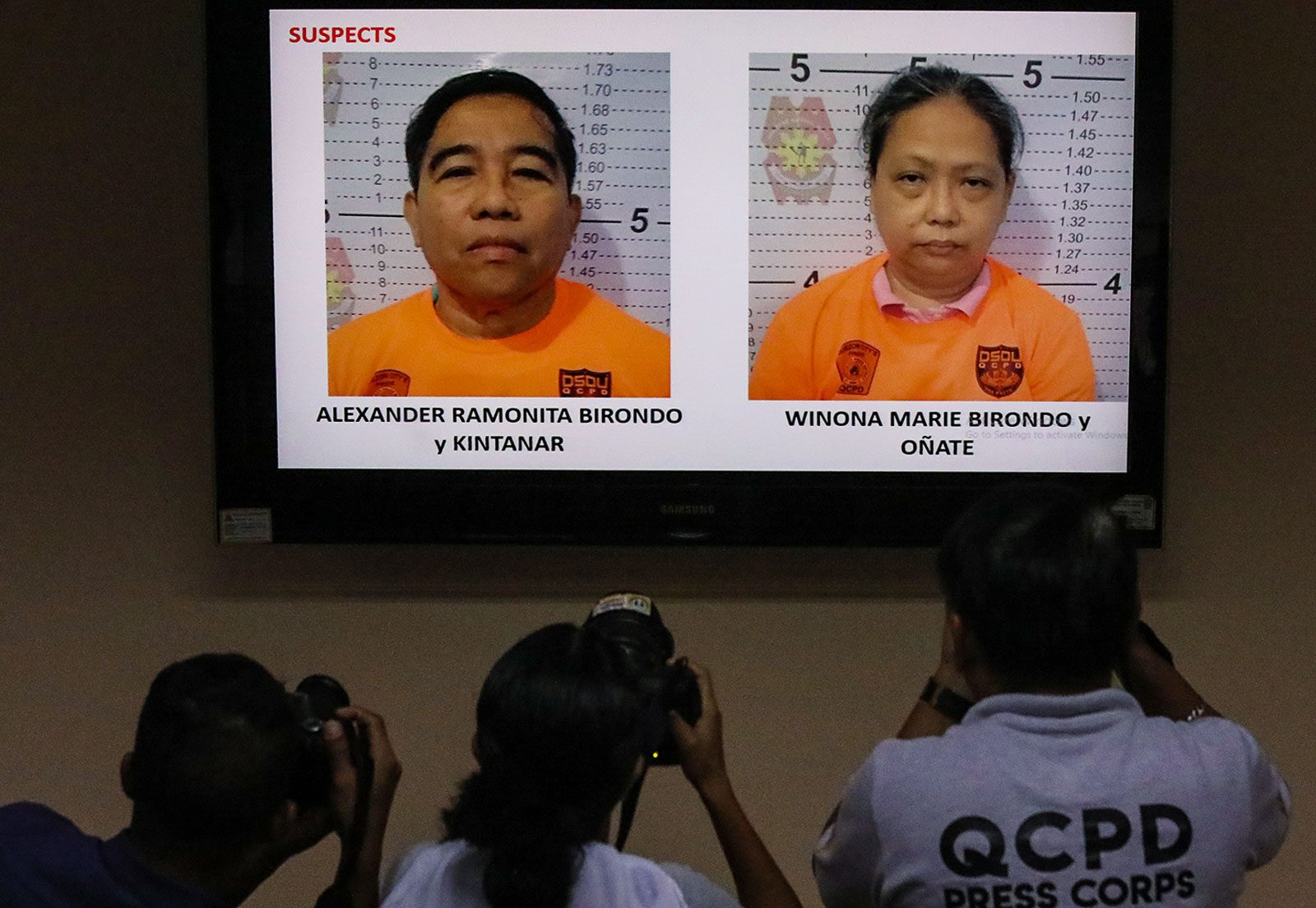 Facebook Twitter Copy URL
Copied
Alexander and Winona Birondo face charges of obstruction of justice and illegal possession of firearms and explosives, which their lawyers have dismissed as 'ridiculous and harebrained'

MANILA, Philippines – Quezon City police have arrested National Democratic Front (NDF) members Alexander and Winona Birondo for allegedly preventing them from capturing a “suspect” who cops claimed was inside the couple’s home.

The Birondos, who were part of the NDF secretariat for peace talks  with the Philippine government, were arrested early morning Tuesday, July 23, initially for obstruction of justice, according to the Quezon City Police District (QCPD).

The QCPD claimed  on Wednesday, July 24, that the Birondos were not their real targets but a man named Rolando Caballero alias Jet, the subject of a murder complaint who was supposedly in the couple’s apartment.

“However, during the operation, the couple interfered, assaulted and physically prevented the police officers from arresting alias Jet who has a standing warrant of arrest for murder,” the QCPD said in a statement on Wednesday.

The Public Interest Law Center (PILC), which represents the Birondos, disputed this and said the cops intended to arrest the couple from the get-go, and did not listen to the couple’s insistence that there were no valid warrants against them.

“Having verified that there are no standing warrants against the two, the police in an ill-prepared complaint said that they did have one against a third person totally unknown to the Birondo spouses,” the PILC said in a statement on Wednesday.

They used to be the subject of warrants for illegal possession and firearms, but the cases against them were dismissed on merit in June 2018, so there were no longer any valid warrants against them.

“The police said that the Birondos were harboring that person and allowed him to escape – despite no trace or evidence of a third person in the small studio-type apartment. This type of contrivance is eerily similar to imaginary ‘buy-bust’ operations,” PILC said

The police initially pressed charges of obstruction of justice against the couple. They had already undergone inquest but had yet to post bail as the police detained them for a separate complaint – illegal possession of firearms and explosives.

This complaint is based on a QCPD search of the Birondos’ house late Tuesday night, which reportedly yielded a caliber .45 pistol, a magazine for caliber .45 with 7 live ammunition, an inside holster, a MK2 hand grenade, a rifle grenade 40mm high explosive, and a roll of detonating cord.

Illegal possession of firearms and explosives is the usual charge against activists.

The PILC called the charges “ridiculous and harebrained, and an obvious play to penalize their participation in the talks and criminalize peace advocacies.”

The arrest of the Birondos bring to 7 the total number of NDF staffmembers or consultants for the peace talks to be rearrested since the negotiations collapsed.