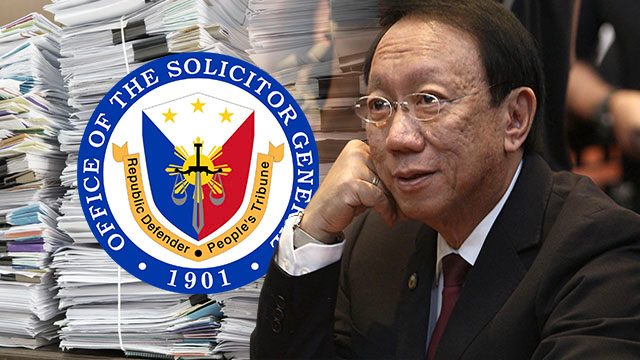 Facebook Twitter Copy URL
Copied
The case log of the Office of the Solicitor General balloons by an unprecedented million in 2017, yet Calida uses office resources to run after Trillanes, De Lima, Robredo, and even Rappler

MANILA, Philippines – Solicitor General Jose Calida continued to use resources of the Office of the Solicitor General (OSG) in running after perceived critics of President Rodrigo Duterte even as the office is flooded by an unprecedented one-million increase of cases in 2017.

Yet in spite of this, Calida has used the OSG in prosecuting critics of the administration, the most recent being the inciting to sedition complaint filed against Vice President Leni Robredo, Senators Leila De Lima and Risa Hontiveros and other key members of the opposition over the viral Bikoy videos that accused Duterte, his son Paolo, and Senator Bong Go of having links to the illegal drug trade.

Bikoy, or Peter Joemel Advincula in real life, has turned the tables on the opposition and is being used as a police witness against Robredo in an alleged plot to oust Duterte.

The OSG has admitted participation in preparing the affidavit of Advincula when the Philippine National Police Criminal Investigation and Detection Group (CIDG) filed the complaint before the Department of Justice (DOJ).

“It is the OSG’s legal duty to serve its clients when they seek legal advice… It is also the duty of the OSG to abide by the client-lawyer confidentiality imposed by law,” said the OSG in a statement, citing Executive Order (EO) No. 292.

EO No. 292 does not specifically mention government agencies which seek legal advice. The closest would be Section 35 (11) which empowers the OSG to “act and represent the Republic and/or the people before any court, tribunal, body or commission in any matter, action or proceeding which, in his opinion, affects the welfare of the people as the ends of justice may require.”

The primary mandate is actually to represent the government in court. The CIDG Bikoy complaint is only a complaint before prosecutors.

“Their role is to represent government agencies before courts, and obviously, preparing a complaint affidavit that will initiate a criminal investigation by the DOJ falls way outside the mandate of OSG,” said lawyer Barry Gutierrez, Robredo’s spokesperson, during a news conference on Thursday, July 25.

Calida’s interest in Bikoy was no secret. As soon as Advincula retracted his statements against Duterte, the OSG sent a text message to a police official to offer their help in assisting him.

(The question is, how many cases does PNP refer for preliminary investigation in the course of an ordinary work day and how many of those cases is OSG involved with? I think this is the only one, so that’s something they have to explain.)

This is not unheard of in the time of Calida.

He was quick to work to prosecute De Lima, offering the OSG to help private complainants against her in the senator’s drug cases. Calida even went inside the New Bilibid Prison to talk to inmate Jaybee Sebastian in his testimony against De Lima.

These extra tasks have caught the attention of former chief justice Maria Lourdes Sereno who once compelled Calida to explain to the Supreme Court the duties of the OSG to quell perception of persecution. Later, Calida successfully ousted Sereno in a quo warranto mode outside of the constitutionally-required manner of impeachment.

It was also the OSG which initiated in December 2016 the review of Rappler’s Philippine Depositary Receipts (PDR), that has spurred a total of 5 criminal cases against the news company and its CEO Maria Ressa, plus a Court of Appeals (CA) review of a shutdown order against the company, and a tax administrative case.

It was also Calida who asked the Department of National Defense (DND) to look for the amnesty papers of former senator Antonio Trillanes IV, which led to Duterte’s attempt to revoke Trillanes’ amnesty, but one which failed to send him back to jail.

It did, however, successfully reopen his rebellion case before the Makati Regional Trial Court Branch 150, despite its dismissal years ago, running against the rule on double jeopardy.

Trillanes, who is also included in the Bikoy complaint, said the charges are “clear acts of political persecution and harassment.”

Justice Secretary Menardo Guevarra has dismissed the OSG’s links to the Bikoy complaint.

“I have said this before and I will say it again: the DOJ is not a weapon for oppression or persecution. We shall go only by the evidence presented before us and we don’t care who gets indicted and who goes  scot free,” said Guevarra.

Panelo has denied Malacañang’s links to the complaint.

“I’m bothered by the legal calisthenics na ginagawa na naman ng ating administrasyon (that is being done by the administration) to justify something that is clearly irregualr and outside the mandate of the OSG…This is really politically motivated, and calculated to harass the Vice President,” said Gutierrez. – Rappler.com