SC: To avoid recycling, police can destroy seized drugs with no court cases 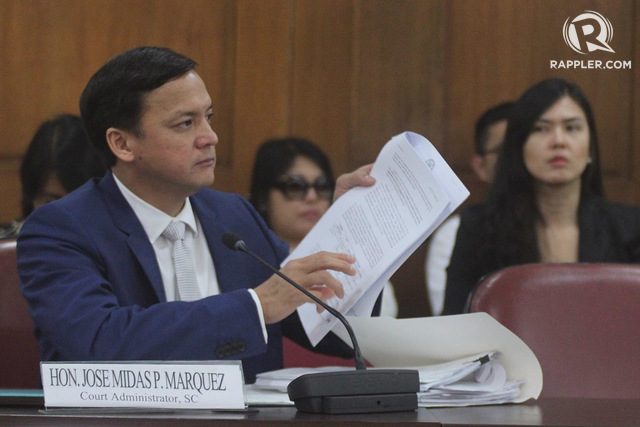 MANILA, Philippines – Court Administrator Midas Marquez said on Monday, September 30, that seized drugs that have no corresponding court cases yet can be destroyed by law enforcement authorities on their own discretion.

“Since there is no case before the courts and most probably, since they are found floating in some sea, then there is no case, there is no respondent, the police can do what it wants to do…Nasa kanila na ‘yun (it’s up to them),” Marquez told the Senate committee on finance on Monday during the budget hearing of the judiciary.

Supreme Court Associate Justice Diosdado Peralta, who was sitting beside Marquez, said that future amendments to Republic Act 9165 or the Dangerous Drugs Act should spell that out.

“That should be included in the law, because the policemen might not also be…they might be also afraid of destroying it, because [there is] no authority from law or from their own rules,” Peralta said.

Senator Franklin Drilon asked Marquez to say it on record, because the minority leader was concerned that some law enforcement authorities were at a loss on how to handle supposed P22-billion worth of seized drugs in their inventory, some of which were washed ashore.

The Senate blue ribbon committee will investigate the issue of so-called ninja cops allegedly recycling seized drugs, either to resell them or plant them as evidence in future operations.

“May namamatay na dito sa recycling (People are dying because of this recycling issue),” Drilon said.

Peralta said that if the seized drugs with no court cases are destroyed, it would reduce the drugs in the inventory to “almost zero.”

Earlier in the hearing, Peralta said courts cannot intervene in the destruction – or other means of handling – seized drugs if charges have not been filed before a court yet, or if the operation was not a result of a search warrant.

Peralta also said judges cannot be expected to always be on top of all drugs cases.

Peralta had earlier said that Philippine courts were “failing in drugs cases.”

Peralta said there’s also a problem of law enforcement authorities not coming back to the judge to submit a return of the search warrant, which should be done within 10 days.

Getting the affirmation of Marquez, Drilon said: “So those which are not evidence in any pending cases, the police authorities would have the authority to burn it…probably the judge should not be present anymore…maybe the presence of the National Prosecution Service (NPS) because they are not as limited as a judge.”

Marquez also proposed to revise the Implementing Rules and Regulations (IRR) of RA 9165 to specify the amount of drugs seized that will require the ocular inspection of a judge.

Drilon asked the Supreme Court for inputs on future amendments to either the IRR or the law itself.

“Help us craft the law, amend the law, in the manner that it will protect both the rights of the accused, due process is followed, and at the same time avoid situations where the drugs are recycled,” said Drilon. – Rappler.com