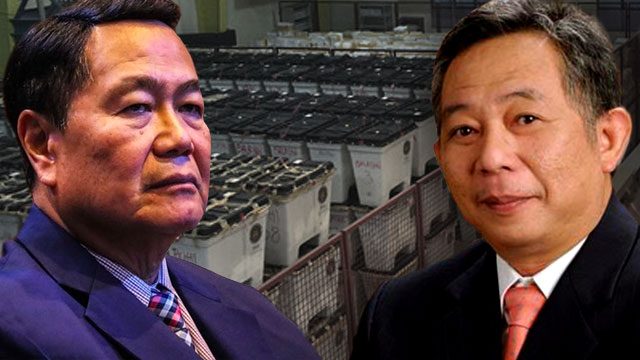 MANILA, Philippines (UPDATED) – Two justices of the Supreme Court  (SC) voted to dismiss Ferdinand Marcos Jr’s electoral protest against Vice President Leni Robredo, but they were overruled by a majority of 11 magistrates.

Hosaka announced that the SC, acting as the Presidential Electoral Tribunal (PET), voted 11-2 to release the report on the revision and appreciation of ballots in the 3 pilot provinces identified by Marcos – Negros Oriental, Iloilo, and Camarines Sur – and to ask parties to comment.

Senior Associate Justice Antonio Carpio dissented, taking the position that the protest should have been dismissed because Marcos failed to make substantial recovery in the 3 pilot provinces, a court insider said.

Two other sources said Caguioa had the same dissent.

The PET also asked the parties to submit position papers on Marcos’ requested 3rd cause of action, which is to nullify votes in Lanao del Sur, Basilan, and Maguindanao.

PET’s Rule 65, adopted in 2010, says that if there is no substantial recovery from the chosen pilot provinces, “the protest may forthwith be dismissed, without further consideration of the other provinces mentioned in the protest.”

Since the Carpio dissent revealed that there was no substantial recovery in the pilot provinces, the Court asking for comments on another cause of action can be favorable to Marcos.

Robredo garnered a total of 477,985 votes in Lanao del Sur, Basilan, Maguindanao against Marcos’ 169,160 votes. If these are nullified, Robredo’s slim lead in the national count would be wiped out. Marcos would lead by 45,352 votes.

The results in the 3 pilot provinces – Negros Oriental, Iloilo, and Camarines Sur – are contained both in a report by the revision committee and in a report prepared by member-in-charge Caguioa.

“I would like to clarify to all of you that the report to be released to the parties is with respect to the results of the revision and recount of ballots on the pilot provinces. It is not the report of Justice Caguioa,” said Hosaka.

Robredo had filed a motion last week to be furnished a copy of Caguioa’s report, but Hosaka said it would not be accurate to say that the en banc granted Robredo’s motion, although the content are similar and the effects are similar.

By their own records, the Robredo camp said the Vice President not only maintained her victory over Marcos in the pilot provinces, she even got 15,000 more votes in the recount.

Robredo’s lead lawyer Romulo Macalintal believes the 11-2 vote is not a reflection of the future voting on more substantive issues of the case.

“Because we are confident that we will be able to convince the entire PET na talagang walang substantial recovery si Mr Marcos,” Macalintal told reporters on Tuesday. – Rappler.com