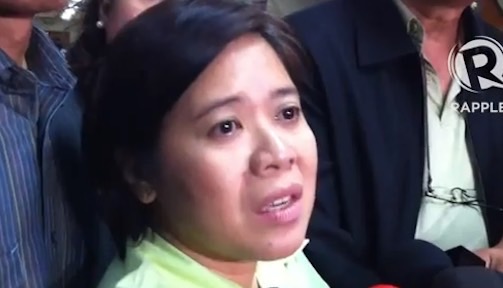 MANILA, Philippines – The Sandiganbayan found former Isabela governor Grace Padaca guilty of one count each of graft and malversation over an anomalous P25-million rice program in 2006.

The anti-graft court ordered her to return to the local government P18 million plus interest.

“Further, accused Padaca is ordered to suffer the penalty of perpetual special disqualification from holding public office and a fine equal to the amount of PhP18,000,000 which is the total amount still due to the Province of Isabela from  Economic Development for Western Isabela and Northern Luzon Foundation Inc or (EDWINLFI),” said the Sandiganbayan Third Division.

The P18 million is the amount that EDWINLFI has not yet remitted to the province of Isabela.

After the verdict was read to her Friday, November 15, an emotional Padaca said: “I don’t even know what to say. With the P25 million, I didn’t personally gain even one cent. That all went to the farmers of Isabela.”

What happened? In 2006, the provincial government of Isabela with Padaca at the helm took out a P35-million loan from the Development Bank of the Philippines (DBP).

Of the amount, P25 million was released to the nongovernmental organization EDWINLFI, which was to serve as middleman to loan the amount to farmers as part of the province’s rice program.

Based on documents and the expert testimonies of the provincial accountant at the time and the auditor who conducted a value-for-money report on the program, the court found the deal with EDWINLFI to be anomalous.

First, documents showed Padaca signed a Memorandum of Agreement (MOA) with EDWINLFI on January 8, 2006, when the Sangguniang Panlalawigan (SP) only signed the resolution authorizing her to engage with NGOs for the said program on January 31, 2006.

The selection of EDWINLFI also did not undergo public bidding. Padaca’s defense was that the provincial government was not procuring goods or services of the EDWINLFI, thus bidding was not necessary. The NGO was not paid a fee to run the loan program.

Padaca said they only paid the cost of implementing the loan program, particularly the seminars held for farmers before they were given their loans.

Moreover, Padaca and her co-accused, the former provincial legal officer Johnas Lamonera, ignored the contention of their accountant at the time who flagged that EDWINLFI did not submit financial statements and other Securities and Exchange Commission (SEC) documents to prove its financial capacity to run the program.

The provincial accountant also flagged that the MOA had no clear repayment scheme.

In the end, EDWINLFI only remitted to Isabela P7 million. The remaining P18 million is unaccounted for.

Why was she convicted? Due to the red flags in the release of funds to EDWINLFI, the Sandiganbayan said Padaca was negligent as the one who controlled the money for the province.

“Thus, for being grossly and inexcusably negligent in allowing EDWINLFI to take public funds without any scheme for its repayment, accused Padaca should be made liable for malversation of the said amount,” said the Sandiganbayan.

Padaca presented loan applications, as well as receipts, to show that farmers received loans and that they repaid their loans. Padaca also brought to court farmers who testified as being among the beneficiaries of the program.

“However, these pieces of evidence miserably fail to negate her criminal liability for the crime of malversation of public funds,” said the Sandiganbayan.

On the irregular selection of EDWINLFI as the middleman NGO, the Sandiganbayan said “there was a clear, notorious or plain inclination on the part of the said government officials to favor EDWINLFI to become the implementor of the Province of Isabela’s rice program despite the fact that the said foundation was not qualified to do so.”

For that, Padaca was convicted under Section 3(e) of the anti-graft law, which penalizes the giving of unwarranted benefits to a party, and which caused undue injury to the government.

“Evidently, the Province of Isabela suffered undue injury in the total amount of PhP18,000,000,00 since the amount of PhP25,000,000.00 was already deducted by the DBP from its savings deposit in the said bank and EDWINLFI merely returned PhP7,000,000.00,” said the Sandiganbayan.

In its order for Padaca to return the P18 million to the provincial government, the Sandiganbayan said she should pay it “plus interest thereon at the rate of 6% per annum, reckoned from the finality of this decision until the amount is fully paid.”