Depression among OFWs: ‘The struggle is real’ 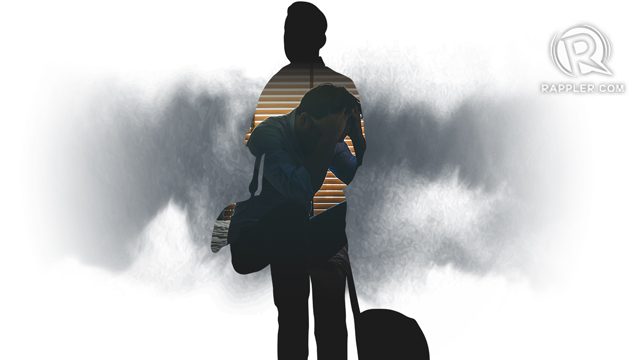 Facebook Twitter Copy URL
Copied
OFWs are vulnerable to depression as they live away from their families and have to overcome language and cultural barriers, say experts

DUBAI, United Arab Emirates – Many overseas Filipino workers (OFWs) suffer from varying levels of depression because they carry “trigger factors” when they leave the Philippines to work abroad.

OFWs also have no family support network that they can depend on.

Social Welfare Attaché Judith Yadan Bacwaden, who has handled around 20 cases in Dubai and Abu Dhabi since she assumed her post almost two years ago, said most of her involved OFWs with a history of depression even before they left the Philippines.

“Majority sa mga kaso, hindi lang dito nag-umpisa. May mga problem na tinatakasan sa Pilipinas tapos nagpunta dito, nagkaroon ng hindi magandang karanasan kaya na-trigger (A majority of the cases didn’t develop depression here. They had problems in the Philippines that they were running away from, then they had a bad experience here which triggered it),” Bacwaden said.

Labor Attaché Felicitas Bay, for her part, said that depression among OFWs may be attributed to personal issues they’ve had prior to working abroad.

“The fear or apprehension that one cannot provide adequately for the family, cannot address marital or family concerns, or the current employment is not what was offered and the job left at home was better than the current – these will affect the state of mind of OFWs,” Bay added.

She said loneliness and homesickness are also “contributory factors to depression especially for first-time OFWs.”

Bacwaden said that in the UAE, depressed OFWs are referred to a particular hospital’s psychiatric care and later repatriated if given the all-clear.

She said that she had come across cases that could be handled by social work intervention alone, but there are those who clearly require professional help.

Psychologists interviewed agreed that Filipinos working abroad are more prone to episodes of depression than their counterparts back home. The main reason is that they usually do not have a strong support system – the were away from their loved ones and lived in the company of peers who also have their share of anxieties working in a foreign land.

“Overseas Filipino workers regardless of gender and occupation, generally leave their comfort zone, including the significant support systems, which is their family, in search of better life for financial stability and better employment opportunity,” said Antiado, who regularly conducts counselling to OFWs during outreach missions, including those who seek help at the Philippine Consulate General’s Office (PCGO).

“The loss of this significant support network causes a major stressor,” she pointed out.

“Depression is an extremely complex mental disease. It can happen to anyone especially if confounded with problems in the family, work, and personal life,” said Sergio, a recipient of the 2016 Presidential Award for Filipino Individuals and Organizations Overseas.

“Hence, if one has been exposed to different circumstances and the emotional intelligence is weak, he or she can be stressed and eventually be depressed,” he added.

“OFWs are among the ones most likely to suffer from depression owing to physical, mental and emotional challenges that living and working abroad bring,” said Malaya, a mental health advocate who regularly joins outreach counselling missions for OFWs.

Aside from marital problems, homesickness, and financial  issues, OFWs also have to cope with their new environment where they may encounter an abusive employer, she said.

Malaya said signs and symptoms of depression include the feeling of helplessness and hopelessness, appetite or weight changes, loss of interest in daily activities, sleep changes, irritability, loss of energy, concentration problems, reckless behavior, unexpected aches and pains, as well as talking about killing or harming oneself.

Sergio, for his part, said, “Most clinically diagnosed depressed people have trouble in concentrating, remembering details, making decisions, restless, have feelings of guilt, feelings of worthlessness, helplessness, pessimism, hopelessness, insomnia, early-morning wakefulness, or sleeping too much, overeating or appetite loss, and suicidal thoughts or attempts.”

Antiado said a recent survey of the International Journal Mental Health indicated that expatriates experience a high degree of stress which in turn disrupts their social and emotional wellbeing and exposes them to greater risk of mental health problems.

“Meeting work demands – Filipinos do multi-tasking; conflicts due to language barriers; absence of family support network and uncertain job security. All these contribute to the vulnerability of OFWs to depression,” she said.

Antiado said signs or symptoms of depression can be categorized as follows:

Sergio said other factors that can increase an OFW’s risk for depression include a family history of depression, certain medical conditions and medications, substance use, childhood trauma, life stress, and poor self-esteem.

Who are most vulnerable?

Antiado said the results of a recent World Health Organization (WHO) “indicated that those who earned least and who had least control of their jobs tended to be more depressed.”

Antiado said WHO surveys and current researches “indicate that women are more prone to depression; and is more pronounced between the ages 18 to 44.”

“Most of the jobs of female OFWs are domestic helpers which is characterized as a 24/7 job where they risk facing different forms of abuse. Due to depression, we read news of OFWs jumping off the windows and the like,” she said.

“I had several encounters with them and it is really happening most especially among domestic helpers who decided to leave our home country for the sake of providing for their loved ones,” she said.

Sergio said that based on her experience, it’s not uncommon to meet an OFW in the UAE suffering from depression.

“Marami sila, magkakaiba ng edad at kasarian (There’s a lot of them, from different ages and gender). I am also doing private consulting through counseling and the figures of people having depression are really overwhelming,” he said.

Malaya said nobody is safe from depression. “Anyone can have it, most especially OFWs. We cannot be free of depression especially if things in our lives are not balanced and when life strikes us with problems and unexpected events,” she said.

“Consult an expert once they have seen the signs of depression. It is so important that one consults a psychologist so that proper intervention can be done. As they say, prevention is better than cure. It is good to detect clinically the depressive episodes so as to save lives of our compatriots,” Sergio said.

Malaya said OFWs should prepare themselves for anticipated problems while living abroad.

“The most important thing is to accept that you go abroad wholeheartedly. OFWs need to be prepared with loneliness, homesickness and hard work.”

She said one can help prevent the onset of depression through a number of ways,  including exercise, continued good communication with family, developing friendships at the workplace, setting a definite timeline on one’s stay abroad, and getting community support.